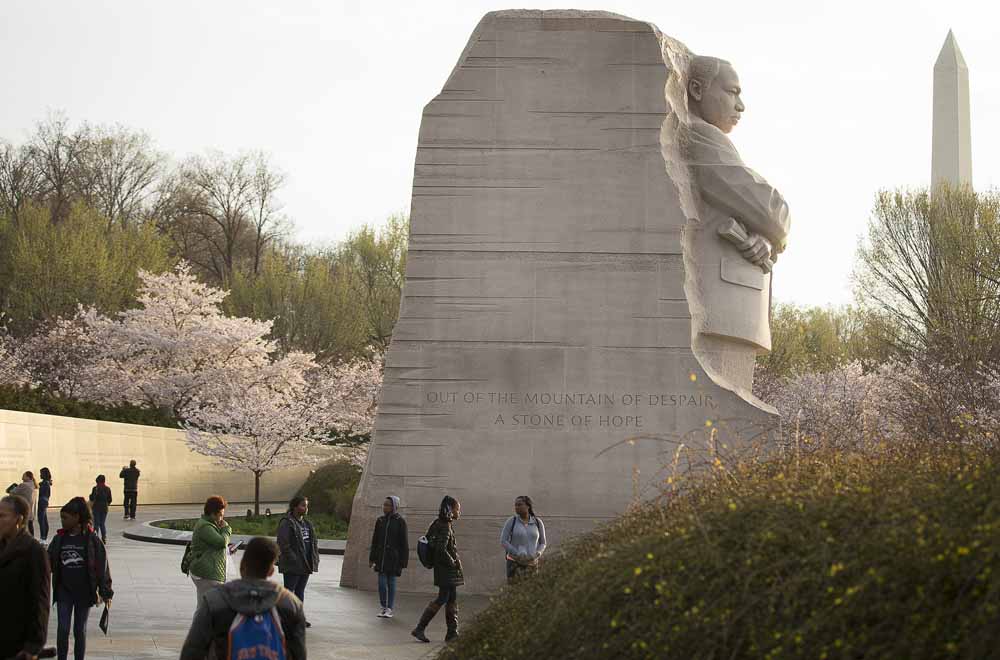 People gather around the Martin Luther King Jr. Memorial in Washington at dawn April 4. The day marked the 50th anniversary of the assassination of the civil rights leader in Memphis, Tennessee. (CNS/Tyler Orsburn)

Christians live in what we understand to be "meanwhile." Which is to say that God in Christ already has defeated death and ushered in the long-awaited age of peace and redemption. But that age isn't yet fulfilled, so this is meanwhile, the time between the times.

Both Catholic and Protestant sources assert that the reign of God has started but hasn't yet reached full bloom on Earth.

For instance, the Handbook for Today's Catholic asserts that "The day has already begun when God 'will wipe every tear from their eyes, and there shall be no more death or mourning.' … Meanwhile, we work and pray for the full flowering of that kingdom to come."

Similarly, the "Confession of 1967" in the Book of Confessions of the Presbyterian Church (USA) proclaims this: "Already God's reign is present as a ferment in the world, stirring hope in men and preparing the world to receive its ultimate judgment and redemption."

So we hope, work and pray in this sometimes-frustrating interim.

The Rev. Sam Mann, a white Protestant who grew up in Alabama and later spent decades as the activist pastor of a black church in Kansas City, thinks it's time to use that interim idea to change how we think about the advances that various liberation movements have achieved.

I was talking with Sam recently about his memories of the riots in Kansas City 50 years ago after the assassination of Martin Luther King Jr., when he declared this:

But, I replied, there are lots of people against all that who don't know they've lost.

True, he said, but that doesn't discount the victories: "I think we have won the hearts and minds of white progressives and we have built a coalition. But we don't know how to take the ground. I don't think we can trust the Democratic Party. All this has not been in vain and has been very successful. Even if you look at the last election, the liberal-progressive side won the popular vote. I think we have won and we need to declare victory and strategize about how to take the ground. But nobody's looking at that."

What, I asked, would taking the ground look like? He was ready:

"It looks like loving the stranger. For the first time in the history of this world we have the capacity to feed everybody, clothe everybody, employ everybody and at the same time destroy everybody. I would say it looks like what King was talking about.

I've decided that Sam Mann is right. Our Christian faith created the pattern for this. Christ's resurrection meant the dawning of a new era, which the apostle Paul saw clearly. Paul wanted to invite the whole world — Jews, gentiles, everyone — to celebrate this by living as if the kingdom, or reign, of God were here today. In other words, to see the world through the eyes of faith.

And that's exactly what Jesus himself proclaimed, as recorded in the first chapter of the Gospel of Mark: "The time has come. The kingdom of God has come near."

It seems to Sam — and to me — that we'll act differently and maybe even more joyfully if we believe liberation, justice, compassion and love already have won.