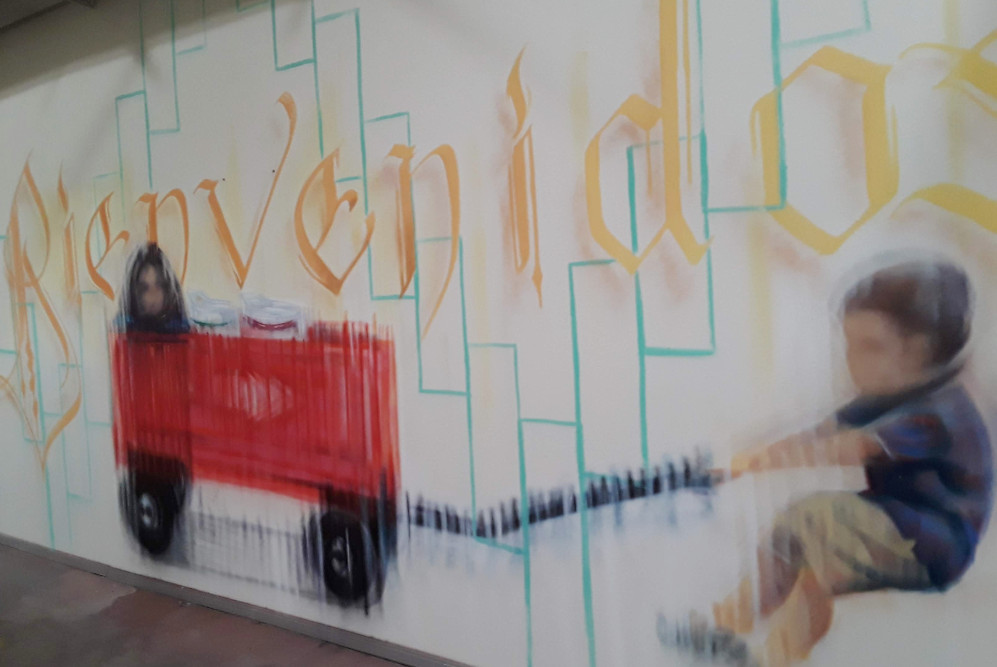 A mural at the entrance of Casa del Refugiado, a hospitality center in El Paso, Texas (Pauline Hovey)

"Go, my people, enter your shelters and shut your doors behind you. Hide yourselves a little while until the wrath has passed."  —Isaiah 26:20

The green Salvation Army cots lie on their sides, like a child's fallen toy soldiers. The warehouse floor of our dormitorio at Casa del Refugiado is unnervingly quiet. A few boys kick a small soccer ball in the back of the room while younger children sprawl on the carpet pad we've laid over the concrete, coloring or glancing at children's books, most of which are in a language they don't yet know.

It is late June and the number of asylum seekers ICE is releasing to our hospitality center has dropped drastically. It feels oddly disturbing to see only 50 or so of these 500 cots upright and occupied, whereas weeks and even months earlier we were struggling to meet the daily needs of several hundred guests.

As I walk across the warehouse floor announcing the names of those who will soon depart for the airport, I greet the few "guests," as we call them, who lie awake on cots covered with gray donated blankets. Some mothers nap, their little child nestled against them. The plastic bags we've handed out filled with toiletries, a change of clothes, diapers, small baggies of Nido — the powdered baby formula they all ask for — sit beside them ready to be taken on the next leg of the journey.

Each guest anxiously waits for their sponsor to buy their tickets to some strangely named city in Florida or Tennessee or New Jersey. Most pray their relative will purchase an airplane ticket rather than a bus ticket since we've tried to explain how vast the distance is between one U.S. state and another. We point them to the map of the United States taped to the wall, stained with marks from so many fingertips tracing various routes out of El Paso, Texas.

Casa del Refugiado is only one of dozens of temporary shelters that began opening throughout the area under the auspices of Annunciation House, a Catholic-based nonprofit directed by the highly respected 70-year-old Ruben Garcia. At his request, makeshift shelters began opening throughout the area known as the Borderland, from El Paso to Las Cruces, New Mexico. Churches of various denominations, hotels, a retreat center, an armory — wherever space could be made available to provide a bed and assistance to those ICE had released to travel to their sponsor.

Unlike most shelters, however, we are open 24/7, requiring volunteers from all over the country to help staff our operation. Former Peace Corps volunteers, college students on summer break, retired nurses and teachers, grandparents from Missouri, Pennsylvania, Kansas, Georgia — someone from just about all of the 50 states has come to volunteer alongside us for weeks and even months at a time as the news spread of our need.

Most days, we've been too busy to get to know each other. But today we sit in the office and, for once, the half dozen cellphones are not ringing off the hook with guests' relatives calling to give us travel confirmations.

We should be glad for the respite; instead, we anxiously speculate on what is happening. We all know the people have not stopped coming. Most of our guests hail from Guatemala or Honduras, and the poverty and violence in these countries have not changed.

We know the people still pay smugglers to take them across Mexico. The difference now is, if they are to make it past Mexico's immigration officials, police officers and other officials, they must go through a chain of bribes. Some are deported back regardless of the thousands they've paid.

Of those who do make it to our border to request asylum, many are processed by ICE and now returned to Juárez, where they risk being kidnapped, raped, extorted while they wait for their court date.

We know a priest who runs a Juárez migrant shelter. "We are overcrowded," he says, having taken in about 250 people. More than 6,000 other asylum seekers returned to Mexico are unaccounted for, Ruben tells us. No one knows where they are staying, how they are faring. Meanwhile our vacant cots line up waiting.

Hannah, a 21-year-old with an endearingly young face, bemoans the dozens of ham and cheese sandwiches stuffed in our fridge ready to be packed for guests traveling by bus. "We could be feeding those people stuck in Juárez," she says. "Why can't we help them? Maybe go bring the sandwiches over the bridge and hand them out?" 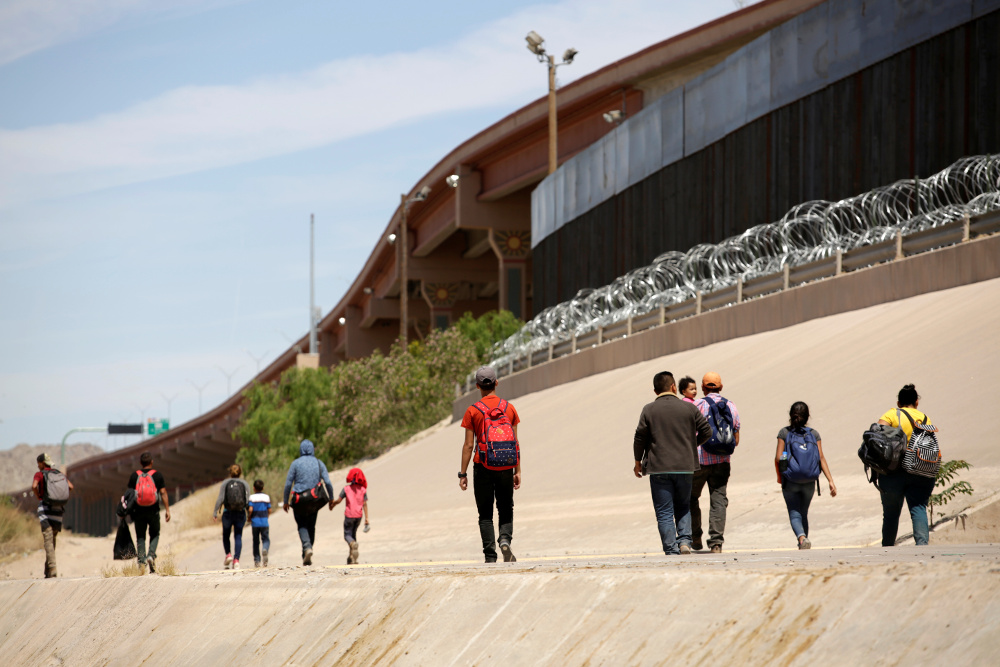 Migrants walk after crossing the Bravo River at the border line between Ciudad Juárez, Mexico, and El Paso in Texas, U.S., as seen May 9 from Ciudad Juárez. (CNS/Jose Luis Gonzalez, Reuters)

Her innocent question reminds me of the parable of the rich man and Lazarus (Luke 16:19-31). The rich man didn't exactly turn Lazarus away. Nor cause him any further harm. He simply kept Lazarus outside his property, ignored him, wouldn't give him the scraps that fell from his table. Yet Jesus said the man's inactions caused him to suffer torment in the afterlife.

I wonder what Jesus' parable would be about the poor outside our gate in the 21st century. What would he say about causing more harm to those who have suffered so much already?

A phone rings. A guest's husband has just purchased two expensive last-minute plane tickets to Baltimore. He hasn't seen his wife and daughter in six years. Two more cots will be turned on their side tonight.

[Pauline Hovey is a writer living in southern New Mexico where she accompanies migrants and refugees at a hospitality center in El Paso, Texas. All Soul Seeing columns can be found at NCRonline.org/columns/soul-seeing.]

A version of this story appeared in the Nov 1-14, 2019 print issue under the headline: Lazarus at our gate.