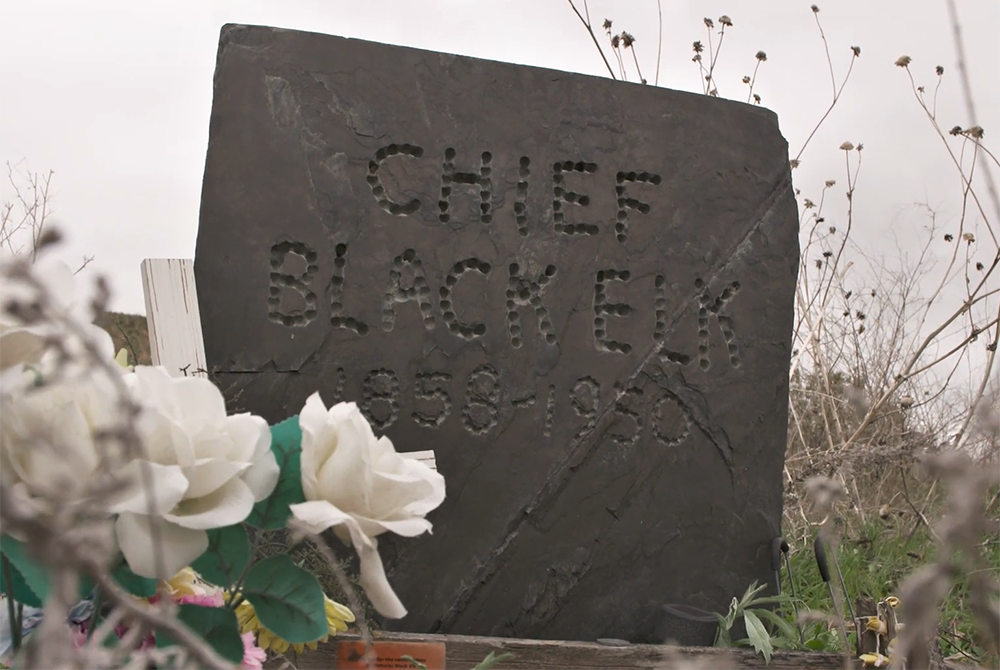 An hourlong documentary about the man who could be the second Native American (after St. Kateri Tekakwitha) and first American Indian male to be canonized a saint, is airing on ABC affiliate stations around the country during the month of May.

"Walking the Good Red Road: Nicholas Black Elk's Journey to Sainthood" comes from NewGroup Media in South Bend, Indiana, and the Diocese of Rapid City, South Dakota. Award-winning producer, Franciscan Sr. Judith Ann Zielinski, researched, wrote and produced the film from its inception in November 2018 to its completion. She also conducted all the interviews in the film.

Nicholas Black Elk was born an Oglala Lakota around 1860 (his grave marker says 1858 but there are no records) and died on the Pine Ridge Reservation on Aug. 19, 1950. For a Native American man of his time, he led an extraordinary life. As a child, he grew up roaming the U.S. government's designated western plains of South Dakota territory with his people. During that time, he became very ill and had a vision while in a coma. He believed it was a call to lead his people to holiness as a medicine man, a holy man. While the chronology is not exact, when he was about 12 years old, he was at the Battle of the Little Bighorn. As Black Elk later told author John Neihardt in the early 1930s, at the battle he scalped two soldiers. 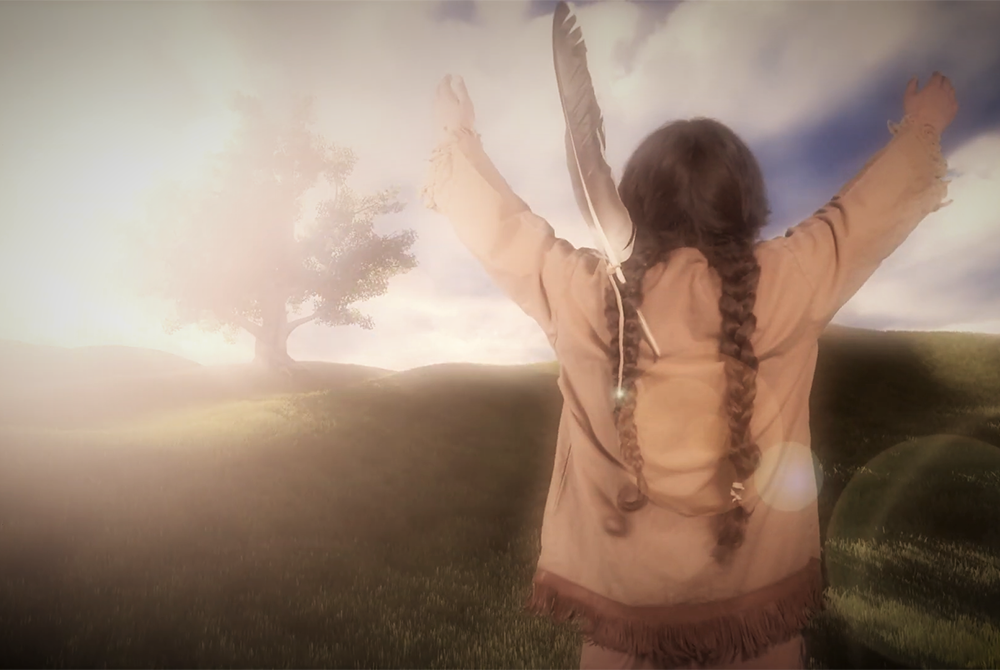 Black Elk experienced a childhood vision that first called him to life as a holy man, recreated in one of the dramatized scenes in "Walking the Good Red Road: Nicholas Black Elk's Journey to Sainthood." (Photo courtesy of NewGroup Media)

In 1887, Black Elk went with the Buffalo Bill Cody's Wild West Show to Europe for two years. He was an exceptional dancer and the troupe danced for Queen Victoria. He was impressed that she stood and bowed to the performers afterward. He was also intrigued by the large churches and how people went to church so often.

Back home at the newly designated Pine Ridge Reservation, he was present just after Wounded Knee in 1890 and a bullet grazed his thigh. It was a time of struggle for him and the Lakota as they dealt with broken government promises and violated treaties, being forced onto reservations because gold had been discovered in their territory, and they had to go so white settlers could come in. Black Elk became a member of the Ghost Dance movement that worked toward a rebirth of the Lakota culture and freedom. He had a vision of the "Messiah" that gathered all the people "under the flowering tree and within the sacred hoop." His vocation was becoming even more clear to him.

In 1904, after the arrival of the Jesuits to minister on the reservation, Black Elk asked to be baptized and took the name Nicholas. After a few years as a practicing Catholic, he was asked by the Jesuits to be a catechist, a lay preacher, who took care of the church and the spiritual and faith formation needs of the parish when the priests were ministering elsewhere. Black Elk, who married again after the death of his first wife, was a husband and father and a faithful catechist for more than 30 years. 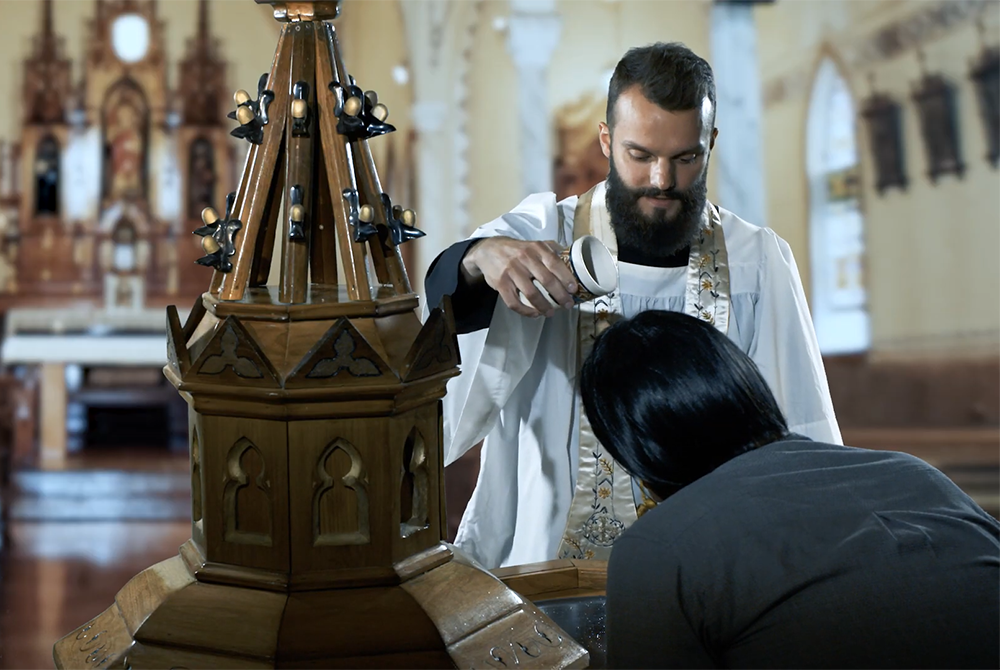 A Jesuit missionary baptizes Nicholas Black Elk on Dec. 6, 1904, in this recreation from the documentary. (Photo courtesy of NewGroup Media)

A chance meeting between one of Black Elk's grandsons, George Looks Twice, and Mark Thiel, the special collections archivist at Marquette University, at the canonization of Kateri Tekakwitha in Rome in 2012 seems to have been the spark that started the long road to Black Elk's canonization. Thiel knew a lot about Black Elk and realized what a gifted moment this was. Then Looks Twice asked him if his grandfather could ever be named a saint. In 2017, his cause was opened, and he was soon named a servant of God, the first step toward canonization.

The documentary is filled with original photographs and interviews with Thiel, Bishop Robert Gruss, current ordinary of Saginaw, Michigan, and former bishop of Rapid City, South Dakota, who initiated Black Elk's Cause for sainthood.

Other interviewees include Jesuit Fr. Michael Steltenkamp, the foremost biographer of Nicholas Black Elk's life and primary contact with Black Elk's daughter Lucy — a fascinating story in itself as he knew her for five years before she died. 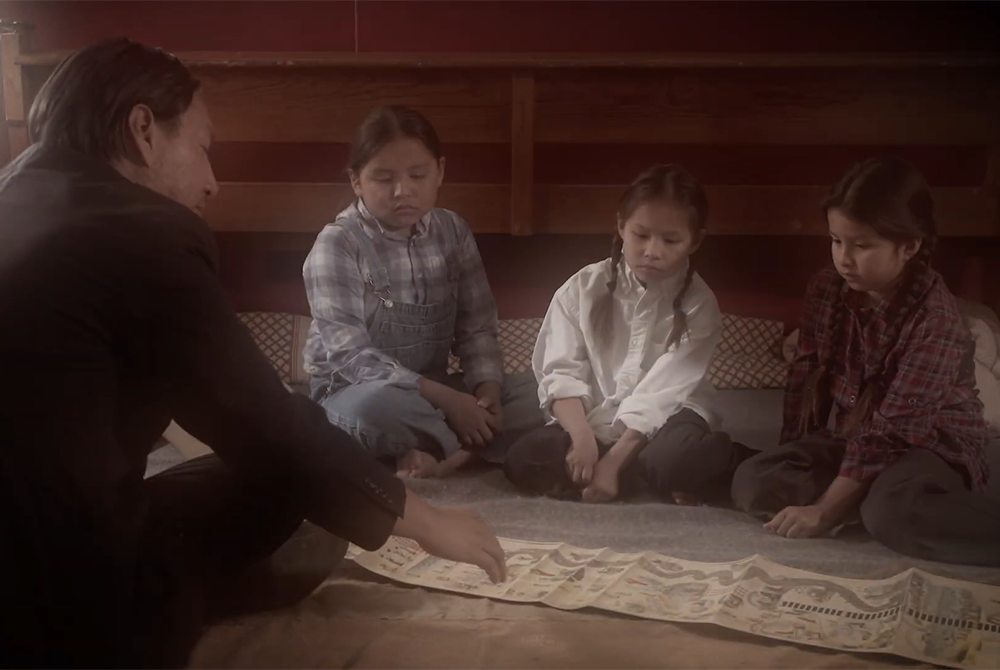 Nicholas Black Elk uses the Two Roads Catechism to educate both Lakota adults and children in this dramatization featured in the documentary. (Photo courtesy of NewGroup Media)

Jesuit Fr. Joseph Daoust, superior on the Pine Ridge Reservation, adds light to how the Lakota distinguished between the Jesuits and other "white men" from the government. His descriptions of the reservations as prisoner of war camps are chilling, as are his accounts of the cultural genocide perpetrated in the schools as the children were "Europeanized" and forced to speak only English, to have their hair cut even though hair has cultural significance, and to wear western clothing. When teachers walked on the cut hair of the children, one Lakota man says, it was like killing their souls.

Damian Costello, a Catholic theologian of Native history with a special interest in Black Elk's spirituality, offers insight into the holy man's inner life and journey, which bridged Lakota culture and Christianity. Voice recordings of Lucy Black Elk are fascinating to hear, as are current interviews with other Black Elk descendants.

As most documentaries are wont to do these days, parts are dramatized. While sparsely used in the film, the depiction of Black Elk's vision might have been better left to the imagination, and direction of a couple of the interviews better crafted. Having said this, watching the film a second time gave me a deeper understanding of the intentional genocide of the American Indians by the U.S. government's killing of buffalo — the source of their food, clothing and shelters; the government hired buffalo hunters to do this.

"Walking the Good Red Road" is a perfect title as it refers to a visual catechism that the Jesuits used with the Lakota. It was a folded map of God's ongoing revelation. The road through the Old Testament is black, but at the birth of Jesus it turns red, leading the baptized to meeting God in heaven.

"Walking the Good Red Road: Nicholas Black Elk's Journey to Sainthood" is an intriguing look into the life of a holy man, an American Indian who evangelized his people and lived a life of Christian virtue. Gruss admits that there is controversy about Nicholas Black Elk's cause; some members of the Lakota believe it is white people again laying claim to their people. Others question the sincerity of his conversion. But not his daughter Lucy and his descendants. Black Elk always claimed his Christian and Lakota identity and he taught them to love, as Jesus did, in word and deed.

[Sr. Rose Pacatte, a member of the Daughters of St. Paul, is the founding director of the Pauline Center for Media Studies in Los Angeles. "Walking the Good Red Road: Nicholas Black Elk's Journey to Sainthood" is airing on ABC affiliate stations in May. DVDs and streaming will be available in the summer from the Diocese of Rapid City.]