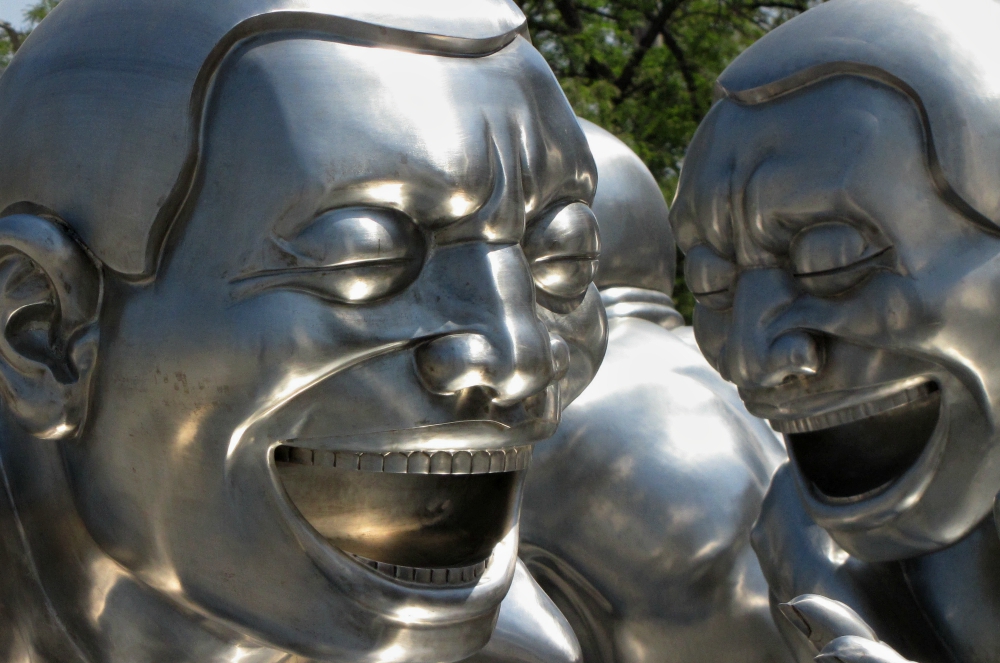 Ask my friends, they know: I tell stories all the time. I love a good joke. And I laugh a lot. All of which provides some serious problems for me in trying to deal with the 10th step of humility on laughter and humor. Let alone try to explain it to anyone else.

Worse, at this moment in U.S. history, trying to distinguish between what's funny and what's not is no small task.

The tenth step of humility is that we "are not given to ready laughter for it is written, 'Only fools raise their voices in laughter' (Sirach 21:23)."

This one stopped me.

Of all the steps of humility with which I found myself faced in the early days of my religious life, not one had as much effect on me as this one. This one I simply could not accept. Everything in me rebelled at the thought of being at the mercy of a bloodless, humorless existence all the rest of my life — and that in the name of holiness.

So, two questions beg for attention:

First, why would a statement on laughter even exist in a document of this depth, this spiritual quality, this centuries-old repute? Not to mention one written by Benedict of Nursia, always called "saint," often called a great spiritual psychologist.

Second, what do we do with it now, in an age of satire, farce, insult and "comedy" routines that aren't funny?

Interestingly enough, I discovered that the history of laughter in societies and religion is a rich one, not a minor one at all.

Indeed, laughter had a great deal to do with the early disquisitions on humility. Yet, at the same time, over the centuries, the meanings first attributed to laughter began to be understood differently.

Clement of Alexandria (circa A.D. 150-215), the first Christian theologian to treat the subject of laughter, was not so much intent on eliminating laughter — which had long been the basis of satire and religious mockery in Rome — but to constrain it. He was committed to the notion that reason ought to dominate the emotions but that laughter disturbed reason. Laughter, he argued, is an outburst that violates rationality. Even smiling, he taught, had to be bridled.

The ongoing teaching for centuries thereafter took the position that excessive laughter is a sign of a weak and undisciplined character. It undermined human dignity.

The early leaders of the church, to a man, inveighed against it. Ambrose, Jerome, Basil and John Chrysostom — who pointed out that Jesus never laughed — all of them considered laughter the anteroom to lust. Laughter, they said, was centered in the body, polluted the soul, and so crowded out the word of God.

Tradition had spoken clearly: Laughter was a first step on the road to eternal doom. And chief among all conclusions was the notion that monks and hermits above all were to weep over the miseries of the world and concentrate on the suffering and death of Jesus. One religious rule after another warned against the role of laughter in distracting the religious from the important things of life.

The teaching was well-established. Christianity had conquered the "eat, drink and be merry" philosophy of the Roman Empire. Life now was about salvation, not sensuality, not "bread and circuses." Centuries before the Rule of Benedict, rigorous rationality had already put down deep roots.

In the 13th century, however, Thomas Aquinas began to interpret games and mirth and even John Chrysostom differently. In the 15th century, the philosopher-priest Marsilio Ficino pronounced laughter to be "gracious." With that new approach to the nature and place of laughter in life, the relationship between laughter and fullness of life began. Finally, with the later recognition of the positive value of the human body, a new conversation began on the role of laughter, propriety, beauty and Divine Joy. It was a medical and psychological insight that continues to this day.

In fact, laughter, in our time, has become big business. There are health claims made for it at the highest levels of neurology, medical and scientific research aplenty. Studies emphasize laughter's place in relationships, social bonding, emotional health, stress reduction and physical health. The dour pictures of our grandparents, him seated, she standing behind him, both of them stern-faced and unsmiling, have given way now to laughing women and rollicking men whose laughter comes off the pages of our photograph albums in waves.

So now where does laughter lie on the scale of morality? What now for us and our generation and especially for our spirituality?

The answer is a simple one: It all depends on what kind of laughter you're talking about. The laughter considered irrational that focused the first 15 centuries of this spirituality? Or the kind of laughter that has to do with scorn and derision, with disdain and disparagement, that is so much a part of our own?

In this century, no, laughter is not a universal sign of lust or a loss of rationality. And yet, the way laughter is used as a weapon now can be far worse than that. High-ranking public officials can get elected to public office in our time by hurling verbal insults at their competition in the hope of reaping a harvest of malicious laughs. So much for civility, for charity, for decent humanity.

In ruination politics, the reputation or good name of other candidates is reduced to a sneer. The favorite indoor sport of today's howling public is to urge the political lions in the arena to snap and snarl and bloody one another.

No doubt about it: Rationality is long a thing of the political past. And so of our political maturity, of our public participation, of the spiritual depth of civic society, as well.

If this step of humility teaches us anything, it is certainly that humor and laughter are not the same thing. Benedict does not forbid humor; he forbids the bawdry and the brutal. He makes the quality of our laughter a measure of our spiritual adulthood.

"Fools," he says quoting Scripture, "raise their voices in laughter." Fools: the dull and the unwise, the imprudent and the silly, the demeaning and sarcastic. The truth is that it's only when we face our own shortcomings and personal limitations that we stop laughing, sneering or snickering at anyone ever again.

From where I stand, humility frees us from the burden of insufferable pride and frees the world to think things through together. We know now that life is to be taken seriously. This is weighty stuff we are about. There is no room for foolish laughing anymore. No regard for the kind of laughter that is mean and nasty, lewd and lascivious.

In fact, laughter as a weapon of spite and personal destruction is now not only disrupting social life, it is threatening our government, the character of our civilization, the indivisibility of our union and, in the end, God help us, "freedom and justice for all."

A version of this story appeared in the Nov 29-Dec 12, 2019 print issue under the headline: St. Benedict's 10th step of humility: When is funny not funny?.