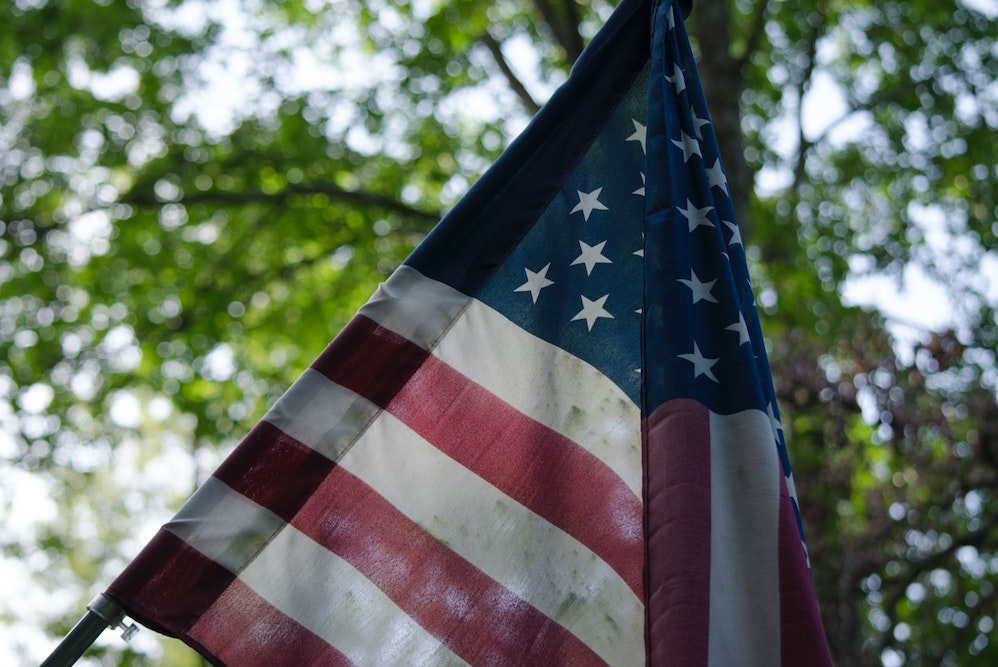 It was the Fourth of July. The birthday of the nation. Once upon a time, it was a moment when every park in the country was filled with intergenerational amateurs playing pick-up games — and laughing while they lose. It was backyard barbecues burning on the grill. It was American flags everywhere: on cars, plastered on front doors, hanging on poles in the driveway.

Most of all, the band on the steps of city hall was filled with high school tuba players while the mayor — whom few knew and nobody cared whether he or she was a Republican or a Democrat — made a seriously non-partisan statement to us all.

All they talked about was what it means to be an American. Not a Republican or a Democrat. An American. Which, the band made clear while roaring for us all, is all of us together.

One country. One people. One government — Republican and Democrat — making all of us safe, all of us one.

At least, those are the kinds of things it used to mean to us. I'm not so sure what, if anything, it means now.

And how did that happen?

The other part of America Past is that most of us were raised on a given standard: that we not do unto others what we would not want done to ourselves. It's a good standard, one basic to every religion one way or another. It's a clear standard for a democracy of differences. The problem seems to be that the standard has changed. Now, apparently, our standards are personal freedom, personal independence and My Civil Rights. Somewhere along the line, "one people, one government" has begun to disappear.

And in the middle of this, we not only have to "flatten" 50 curves, one at a time, but elect a new government, as well.

The problem is that the biggest internal war the country has ever waged, other than the Civil War, is being fought in Congress right now. It's a tug of war designed to break one political party by the power of the other rather than to plait one universal position out of both insights that together has meaning to us all.

So we now have a Congress without a conscience that casts votes — not for what's best for the country, but for what's good for the power base of the party. America never really wins anymore; it's the parties that win — or lose — and all of it by a vote or two.

Now you might as well just retire the party that lost the majority number of votes the night before and let the other party reign — by a vote or two — uncontested for the next four years.

Can anything save us? Well, in years past, we held one universal standard between us that seems to have given the process both civility and balance. Maybe we need a new standard.

I propose the 10 commandments of American politics:

1. I am the Lord thy God, thou shalt have no gods besides me.

Remember: Being president does not make a person God.

This commandment forbids idolatry, even of the self. No narcissists allowed. It excludes the notion that we can make golden calves or worship statues of Caesar, for example. I think it would also have rejected wearing MAGA hats instead of carrying copies of the Constitution.

2. Thou shalt not take the name of the Lord thy God in vain.

Remember: Civil discourse and human respect are the underpinnings of democracy.

When we destroy as a people what we say that we value as a people — like free speech, civil rights, the union of our 50 states — by mocking, deriding or setting out to divide them from one another, we lay a curse upon the country that will someday destroy us all.

Remember to keep presidential the symbol of the republic.

If we reduce the quality of the presidency to the level of burlesque, we substitute statues of marshmallow for memories of genuine leadership.

4. Honor thy father and mother.

Remember to honor both sides of the aisle — Republican and Democrat.

In order to come out with national answers to global questions that respect both Democratic and Republican concerns, we must work together, as friends with different concerns about the same things. Then the whole country can prosper.

Remember: Thou shalt not kill with partisanship the American spirit of differences.

The U.S. Congress was created to bring order, reflection and compromise rather than bloody battles between political forces that win one side of the issue at the expense of the other by merely a vote or two.

6. Thou shalt not commit adultery.

Purity of blood lines or historical hegemony do not determine the quality of inclusion for American citizens from multiple cultures. In an intercultural world, what counts is the Americanism of the heart, not the color of the skin.

7. Thou shalt not steal.

Remember: Thou shalt not steal from the poor to give to the rich either nationally or globally.

Sending all the money to the top while whole populations need only foundational support to make their own way to human security and development is the sin hidden by those slim majorities of one or two votes. Real democracy demands just and decent distribution of the basics of life — education, health care, food and decent housing for all. In the end it is the only thing that will strengthen the entire country.

8. Thou shalt not bear false witness against thy neighbor.

Remember: Thou shalt not lie in tweets, advertisements, public declamations or administrative and congressional speeches.

To divide the Congress is to divide the country. It is the highest treason done for the sake of the shortest ever triumph.

9. Thou shalt not covet thy neighbor's partner.

Remember: Thou shalt not covet thy neighbor's popularity.

To aim insults, intrigue and incrimination at another public servant only loosens the bonds between us. The purpose of politics to give all voices a chance to be heard and all new insights an opportunity to resolve difficult public questions.

10. Thou shalt not covet thy neighbor's goods.

Remember: Thou shalt not take for yourself what rightfully belongs to the other.

To cheat people out of a fair wage or fail to give employers a full day's work for a full day's pay is stealing. Embezzlement, fraud, tax evasion and vandalism are all considered violations of the 10th commandment.

From where I stand, it seems that maybe if we had been using the 10 Commandments as a standard for our own decisions and balance of power, we wouldn't be so split as a people. Or, worse, so unhappy as a country, so depressed about the future, so concerned about immigrants, so bedeviled by border walls, so suspicious of lock downs and so in need of the gift of common care.

Maybe we would be less worried about the corruption of American government in our dealing with foreign powers or the crude, rude and lewd comments that have become part and parcel of our political patois.

Maybe we would be less affected ourselves by the new mistrust, fear, brokenness and breakdown between what we thought we were as Americans and what Americans seem to be doing to America.

Then, at least, maybe we could rest assured that in the face of corruption we were demanding moral choice, and in the face of immorality we would not be lost in the morass of it knowing that we had standards again — and were keeping them.

A version of this story appeared in the Aug 21-Sept 3, 2020 print issue under the headline: Ten commandments for a pandemic moment in American history.