A rainbow in the Sonoran Desert (Tracey Horan)

I often begin my annual silent retreat by praying that I will be open to the lurings of the spirit. As much as I like to think I am open to the ways the Holy One works, I was surprised that this year these lurings would come from a cactus.

There are lots of things I love about the desert, but as I started out on the first of what would be several solo hikes during my retreat last month at the Desert House of Prayer in Tucson, Arizona, I noticed that an uneasiness hampered my normally rapid pace. So many spiky things lined the narrow path, and saguaro cacti loomed large all around me. As time went on, I realized I was afraid of getting close to the saguaros: just looking at their spines was daunting. I imagined myself tripping and falling into one. I held my breath passing near saguaros that looked decrepit, like their tall lanky frames could topple and spear me into the ground at any moment. After all, cacti are more or less hollow, right? What in the world was keeping these giants upright?

Day two of my retreat, I came upon a saguaro skeleton, the woody frame of a cactus that had died. I was surprised by how substantial the frame was. I realized that if I wanted to get over my fear of being impaled and hike in peace, I would need to get closer. I would need to get to know these giants of the Sonoran Desert. 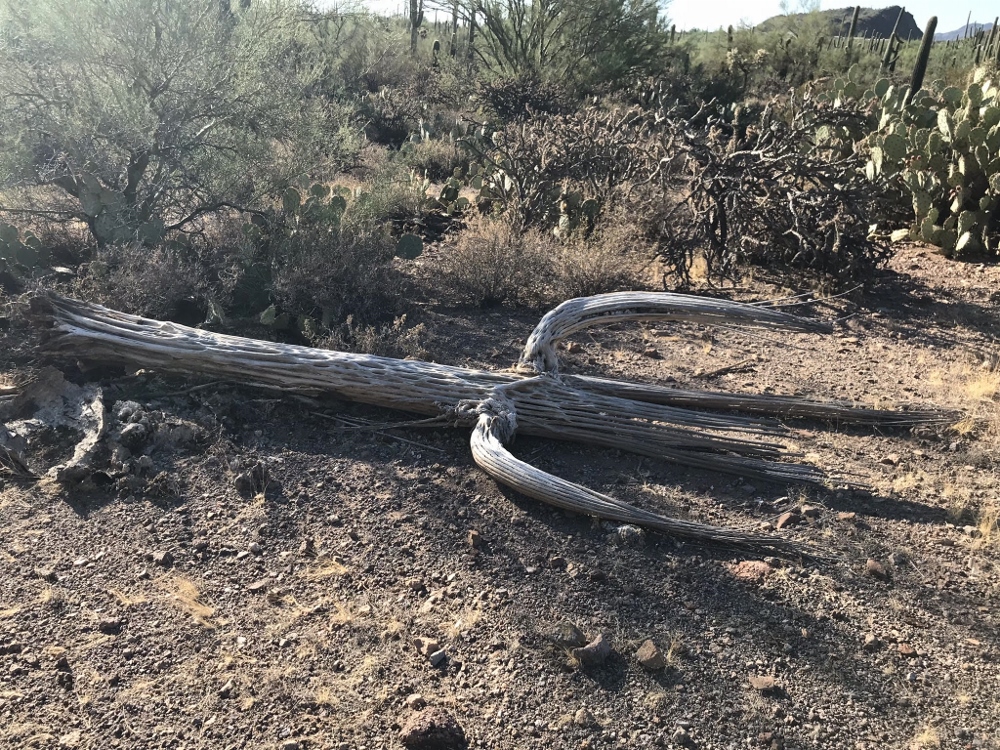 The fibrous skeleton of a dead saguaro cactus (Tracey Horan)

On day three, I decided to touch a saguaro, which felt to me like a heroic act. I got close enough to find a break in the spines where I could touch the green skin without fear of losing my hand. I put my fingers on the leathery flesh. It felt surprisingly substantial, smooth and safe. I loved the sturdy feel of it, and took it in with the comfort I would a maple tree back home in Indiana. When I leaned on the saguaro, it didn't topple over, the way for some reason I had imagined it might. In this moment, a kinship began: I wanted to learn as much as I could about these towering, sturdy, hollow, spiky creatures.

I did some research and found a self-guided hike with informational panels describing desert life. I learned that a saguaro seedling only grows about an inch above ground in its first eight years of life, and that these cacti don't start branching out until they've built a firm foundation for about 75 years. I learned that saguaros might scatter up to 22 million seeds in their lifetime; they'd be lucky if one would bear fruit. I learned how animals use the hollow of the saguaro as a source of cool shelter, and how the oldest saguaros can live up to 200 years, longer than my religious community has existed.

With each new learning, my fear melted into fascination and reverence. I marveled at the years of energy that had been poured into their strength. I walked past the tallest ones, now realizing they were likely growing before my great-grandparents were alive. To think I had been afraid of these magnificent creatures!

Fear is a crucial life-saving instinct. Even so, I lament how often fear prevents me from getting closer to other living beings or to God. Getting closer to someone or something we fear is risky. Fear also has a way of dissipating with closeness.

During my retreat, I was invited into the risk of closeness as I meditated on the words of John O'Donohue:

You can trust the promise of this opening.
Unfurl yourself into the grace of beginning
That is at one with your life's desire.
Hold nothing back, learn to find ease in risk;
Soon you will be at home in a new rhythm,
For your soul senses the world that awaits you.

In this time of transition to living in a new place with new people in a new ministry, I have found plenty to fear: that my gifts may not be enough for the task at hand; that I may commit offensive cultural faux pas living in a different country; that despite my best intentions, my presence in Mexico might reinforce the paradigm of white supremacy; that things will continue to get worse for migrants before they get better.

Moving beyond these fears has meant jumping in anyway — getting close enough to marvel at the beauty that is already here and letting that beauty fuel me.

In the midst of it all, I wonder: what morphogenic ripple would form if each and every one of us decided to get closer to someone we fear? The thought itself is disarming. As a former community organizer, I'm trained in the strategy of effective, linear campaigns. I've also seen the miraculous, surprising things that happen when people get closer, when they decide to stop being afraid of one another. There is a sacredness, a magic in this closeness that is immeasurable and unpredictable.

As I listened to Paul's words to Timothy at Mass in early October, a smile spread across my face:

"For God did not give us a spirit of cowardice but rather of power and love and self-control."

I remembered my luring into the desert: the saguaro encounters and the power of disarming closeness. As an expert in finding things to fear, I have found comfort in this Scripture. It has been a guiding light for me over the years in the practice of embracing the daunting spiky things. After all, without their luring, I would have missed out on the gentle voice of the Holy One.

[Tracey Horan is a member of the Sisters of Providence of St. Mary-of-the-Woods, Indiana. She is the education coordinator at the Kino Border Initiative in Nogales, Arizona, and Sonora, Mexico.]