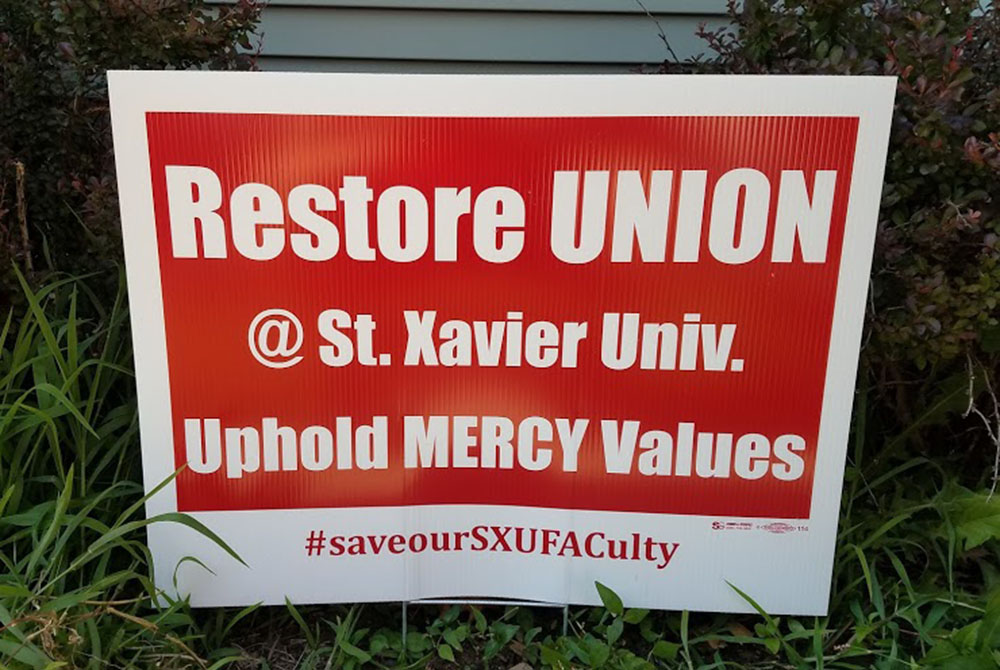 The affable 85-year-old tells a story well — and he has a lot of them. William "Bill" Peters spoke about the university we both love, St. Xavier. He reminisced about the campus environment during the push for faculty unionization. With equal parts passion and disappointment, he opined about the recent travesty that happened to the union he helped found and lead.

Established in 1970, the Faculty Affairs Committee or FAC became the collective bargaining agent on Nov. 16, 1979, when faculty at St. Xavier voted to unionize. The college president, Mercy Sr. Irenaeus Chekouras — a wonderful person and tough negotiator, Peters recalled — informed the board. On Nov. 27, 1979, the National Labor Relations Board formally certified the FAC as an independent union. And so it was, until May 28, 2020, when the current president and board at St. Xavier notified the FAC that they would no longer recognize the union or bargain with them. After 40 years, the union was busted.

According to Inside Higher Ed, in communications to faculty, the university cited the need to be "nimble and responsive" considering the pandemic and economic concerns, and blamed the FAC for lacking transparency and draining university resources for two years in failed negotiations. Current leadership of the FAC agrees with the timeline. The impasse began two years ago, when the administration hired an attorney who specializes in union avoidance.

The union busting at St. Xavier has concurrent realities of being a local issue and a national concern, a pastoral problem, and a precedent setting practice on other campuses. Regardless of the domain, church, state, or local or national presence, three fundamental questions have to be asked of a Catholic institution and answered, as I see it, according to the criteria of the church: 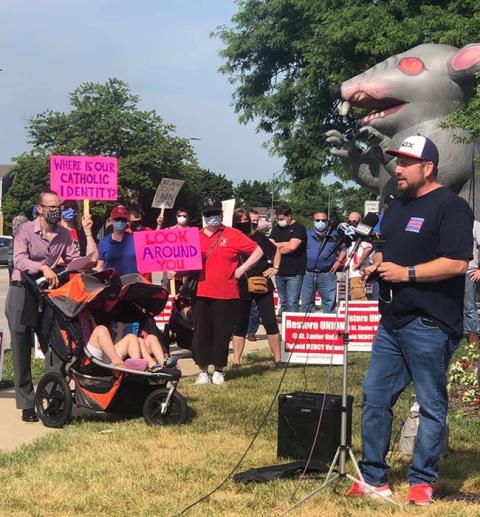 Rob Reiter, president of the Chicago Federation of Labor, speaks at a June 27 rally supporting the union; Mark Piper is pictured, at left (Courtesy of Fran Hurley)

My alma mater, St. Xavier ('10), is situated in the 19th Ward, the South West Side of Chicago; an area of many union households. "Look around you," Rob Reiter, president of the Chicago Federation of Labor exclaimed at a June 27 rally supporting the union. "Where is this university at? It's right in the heart of Chicago labor."

State Rep. Fran Hurley ('83), was at the rally. She joined 19th Ward Alderman Matthew O'Shea, State Sen. Bill Cunningham, and State Rep. Kelly Burke in sending a letter to the administration of St. Xavier asking them to reverse course and bargain with the union. When Tim Fitzgibbons of the International Brotherhood of Electrical Workers (IBEW) Local 134, spoke, he announced that the IBEW would pull its scholarship unless the university bargained with the union.

Amid a pandemic, I do not envy the responsibilities of a president or board (or staff or faculty) at any college. But a crisis is not an occasion to abscond from one's Catholicity or responsibilities. This point was addressed by two other rally attendees, Steven P. Millies and Bill Droel.

Not present, due to the pandemic, were three Mercy Sisters, Pat Murphy ('60), JoAnn Persch ('61), and Rita Specht ('65), who composed a letter speaking only as alumnae of St. Xavier's.

Local clergy who could not attend the rally signed a letter expressing their serious pastoral concern with the administration's union busting.

The emcee of the rally was the Rev. C.J. Hawking, the executive director of Arise Chicago, an interfaith worker justice organization. Born and raised in the 19th Ward, Hawking was taught by the Sisters of Mercy at Queen of Martyrs Elementary School and the Mother McAuley Liberal Arts High School, both adjacent to the campus of St. Xavier.

"The Mercies taught me social justice. This is outrageous — in this neighborhood — this is so contradictory to what they taught me," she said at the rally, continuing, "The reputation of the university is at stake. We're here standing up to union busting."

"This isn't about the Mercies, it's about the administration of Xavs and making them accountable," Fr. Bill Corcoran, pastor of St. Elizabeth Seton Parish in Orland Hills, Illinois, told me in a phone interview. Corcoran said priests in the vicariate have met about the "pastoral failing" at St. Xavier.

"From the standpoint of the law, Xavs has done nothing illegal. But this is a moral issue, this is contrary to strong Catholic social doctrine," he said, outlining the two issues he has with the decision. "First, Xavs proclaims and sells itself as Catholic, and the outcome of this decision is contrary to the church's teaching. Second, Xavs is in a union neighborhood. To not be sensitive to the people around them, to our parishioners, is a problem. This affects the entire local Catholic community." 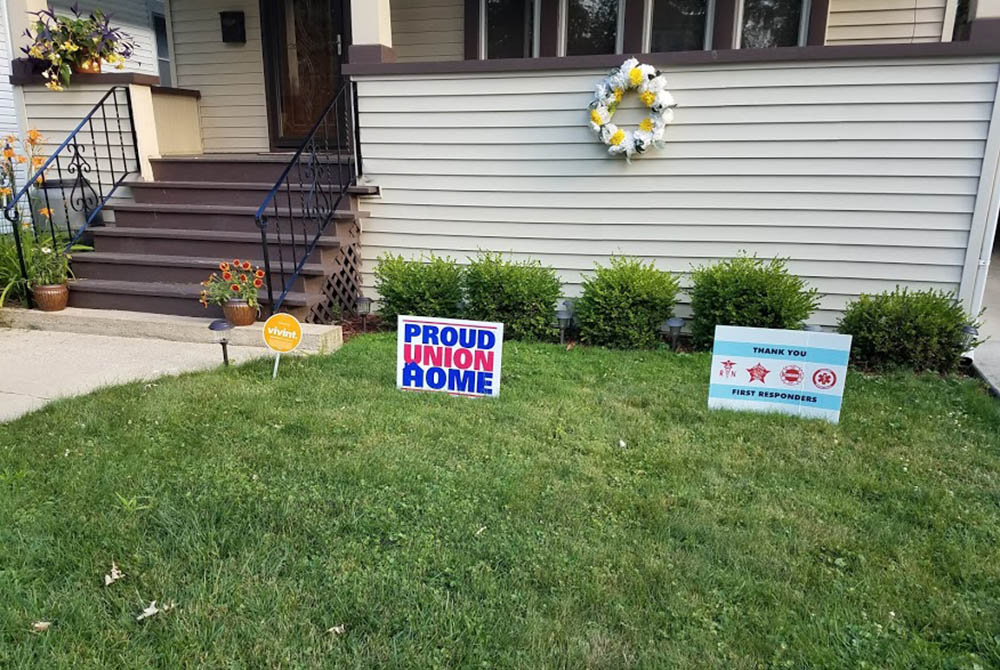 Founded in 1846 by the Sisters of Mercy, St. Xavier is no longer owned by the sisters. Rather, St. Xavier is sponsored by the Conference for Mercy Higher Education,* or CMHE. On July 6, CMHE provided me this statement:

The CMHE Board supports the work of the University Board in this matter and respects the principle of subsidiarity.

Fr. Clete Kiley, chaplain for the Chicago Federation of Labor, told me in an email, "When I heard about this, I felt sick to my stomach. Another Catholic institution betraying our social doctrine. When I learned the president had hired a 'union avoidance specialist attorney,' I was angry. There could not be any greater sign of her lack of good faith."

What specific Catholic social doctrine regarding collective bargaining are FAC supporters citing? The church's teaching and support of unions goes back to Rerum Novarum in 1891, before faculty unions existed. Here's a list of the consistent church teachings regarding the support of workers' choice to organize and select their choice of bargaining unit, since the certification of the FAC in 1979:

It is the workers' choice alone to unionize and bargain collectively; no one may deny the right to organize without attacking human dignity itself. This is the clear, consistent teaching of the church. A Catholic entity utilizing a union avoidance attorney or busting a union, seems in contravention of Catholic social doctrine. If this is what the Conference for Mercy Higher Education allows, that is their prerogative. But it's an allowance in defiance of church teaching.

This goes beyond St. Xavier and CMHE. Through ownership or sponsorship, Catholic religious orders in the U.S. operate multiple colleges, hospitals and agencies with unionized staff. If the type of union busting at St. Xavier's stands, what message does this send? What values are articulated to unionized frontline workers in the middle of a pandemic? What about staff and students?

More on the Faculty Affairs Committee and Catholic social doctrine

For more information on the formation of the Faculty Affairs Committee and its subsequent unionization, read First In Chicago (Chapter 21: Faculty). For deeper dives into Catholic social doctrine, Catholic colleges and union avoidance, read the work by Kaya Oakes and Clayton Sinyai.

Many of those same religious orders ethically steward their funds, ensuring they either do not invest in morally dubious industries or they use those funds to lobby those industries. Moving forward, I hope these religious orders could likewise ensure their sponsored works do not dispense funds to hire the services of union avoidance specialists.

A recent legal decision (Duquesne University of the Holy Spirit v. National Labor Relations Board) ended NLRB attempts, beginning in 2011, to be the arbiter of who or what is Catholic and who or what is not. This was the crux of my graduate school capstone. I support collective bargaining and I support this ruling. A secular government shouldn't be in the business of theologizing or policing an organization's Catholicity.

With the conclusion of this legal battle, case law ensures institutions like St. Xavier have freedom in their ability to preach the Gospel without government interference. Sadly, it appears, the Gospel they'll employ in a court of law — for exemptions — is not a Gospel they will put into action on their campuses.

Legally, we're back to where we were when the FAC was certified in 1979. The law does not prevent unionization at religious institutions, it identifies boundaries of the NLRB. Church teaching has remained consistent on the right of bargaining. Faculty and administrators come and go, but a change of administration should not change a worker's fundamental rights, labor or otherwise.

I spoke with Vincentian Fr. Dennis Holtschneider, president of the Association of Catholic Colleges and Universities for a broader perspective on this issue. The ACCU does not have an official position on unions, which are on many of its member campuses. I appreciate his experiences and knowledge on this topic. At Niagara University, he represented the administration in faculty union negotiations; while on faculty at St. John's University, he paid his union dues; as president of DePaul University, he had some staff who were unionized.

"Some administrators choose to work with unions, and some choose not to. It is an enormous mix," he told me. "Every institution enshrines that [faculty voice] differently. Sometimes it's achieved by faculty senate, sometimes by bargaining. Some have faculty on boards of trustees. There are different structures for faculty to speak to conditions of their work." He does not believe there will be a rush to decertify unions across Catholic colleges.

Where does St. Xavier go from here?

"In the end," Kiley said in his email, "any resolution must follow the principle of subsidiarity and get resolved on the campus of St. Xavier. The faculty as leaders, the rest of us — in solidarity — will help them as best as we can. This situation is a great example of solidarity and subsidiarity working together. Faculty are, for now, determined to resolve the situation locally (subsidiarity) while broadening awareness of their situation and widening the circle of concern (solidarity)."

I pray with the Faculty Affairs Committee and I pray for a resurrection of the union Peters helped create. I can only hope prayers have more efficacy than multiple papal pronouncements have so far procured.

[Mark Piper, a Packers fan in an unholy land, works in the nonprofit sector. He resides in Chicago with his family and holds a master's in leadership and policy studies from DePaul University and a bachelor's from St. Xavier University; he is an alumnus of Amate House, a year of service organization sponsored by the Chicago Archdiocese.]

*An earlier version of this story incorrectly stated that the Conference for Mercy Higher Education is the sole corporate member of St. Xavier.