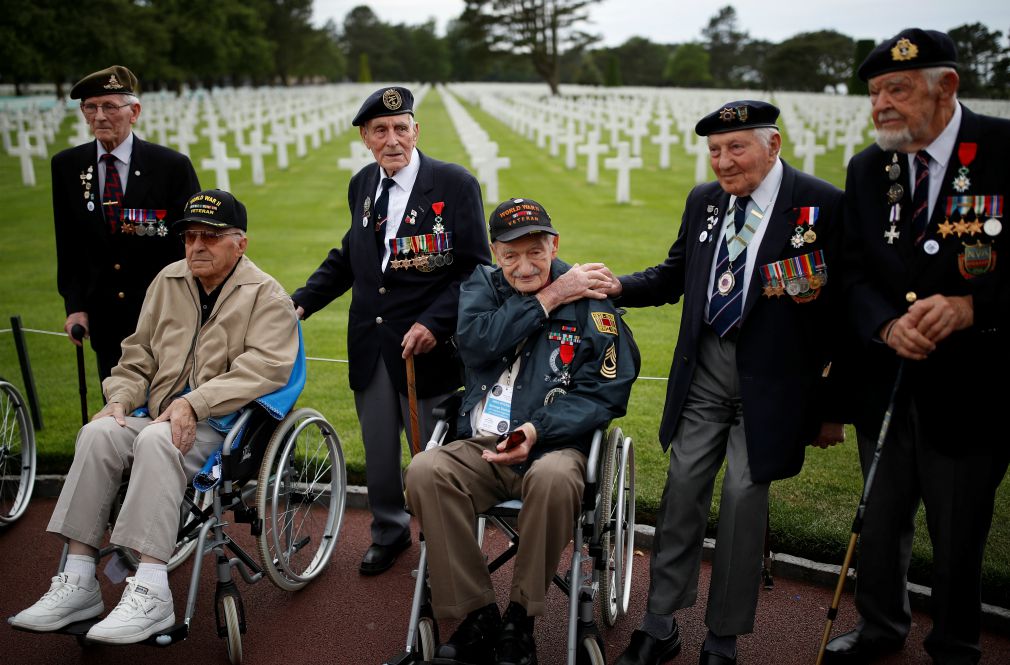 World War II D-Day veterans from Britain and the United States attend a ceremony June 4 at the Normandy American Cemetery and Memorial in Colleville-sur-Mer, France. The 75th anniversary of D-Day was June 6. (CNS/Reuters/Christian Hartmann)

First, there was acknowledgment of the tremendous bravery of those who fought and died that day. As Queen Elizabeth II said, "The heroism, courage and sacrifice of those who lost their lives will never be forgotten."

Further, there was a poignancy surrounding the fact that so few World War II veterans are still alive. "The youngest D-Day vets are now in their mid-90s," wrote Jamie Katz for Smithsonian.com, "and it is generally understood, if not necessarily said aloud, that this year's major anniversary salutes may be the final ones for those few surviving warriors."

Finally, there was a sense that when we eventually lose these remaining soldiers, we will lose with them an uncommon valor and strength of character, qualities the generations that followed "the Greatest" have been unable to match.

"Don't make 'em like that much anymore," someone wrote in response to a D-Day post on LinkedIn.

It is hard to disagree with this last sentiment, but I fear that it lets the rest of us off the hook. If the boldness and grit of the soldiers who stormed Normandy are truly inimitable, can those of us who came after be blamed for failing to sufficiently demonstrate their finest characteristics?

But I wonder if within this argument there is a sneaking implication that today we lack a cause with a clear right and wrong, that the issues we face are too morally ambiguous to compel us toward something as noble as risking our lives on a beach in France.

There is no doubt that many, if not most, of the major issues we face are vague in a way that Nazism was not. Today's black-and white-appeals that cast clear saints and sinners are rarely so simplistic in reality.

On the other hand, I think the problem we sometimes face is not that we lack clarity in determining the right thing to do; it simply is not convenient for us to do it. We fail to remember that even the most just causes had their detractors. A prominent America First Committee opposed aid to Great Britain as it was battered by Nazi Germany, and Joseph P. Kennedy, the former United States ambassador to the United Kingdom and father of President John F. Kennedy, was guilty of a "relentless drive to appease — indeed, reward — tyranny [that] was monomaniacal, preposterous and dangerous. In his view, Hitler was really just another businessman with whom a deal could be struck."

Moreover, we fail to remember that history's heroes often stood alone before an army joined them. Finally, we ignore the many worthy issues that should claim our attention today, whether it is responding to the largest refugee crisis since WWII, raising our voices with young people demanding action to address climate change and gun violence, or any number of other urgent needs. We certainly do not lack opportunities to commit ourselves to something meaningful.

In a moving essay for The Wall Street Journal, Peggy Noonan drew a hopeful picture of D-Day's legacy living on, comparing recent college graduates to those veterans.*

"But they're earnest, all of them, like people who can surprise you — can surprise themselves — by meeting a historical test. And surely they'll be given one, given many."

D-Day's latest anniversary is gone, and some day much sooner than we'd prefer, the last WWII veterans will be gone, too. If there is a lesson we take from them, I hope it is not only about the specific test they rose to face but also about their willingness to meet whatever challenge their times happened to present to them. For just as they did, so can we.

*Brian Harper would like to thank Ms. Genie Kenny for bringing this article to his attention.

[Brian Harper is an alumnus of Fordham University's Graduate Program in International Political Economy and Development and Marquette University. He previously worked in communications with the Midwest Jesuits and served as a Jesuit Volunteer in Peru. You can read his work and listen to his music at www.brianharper.net.]