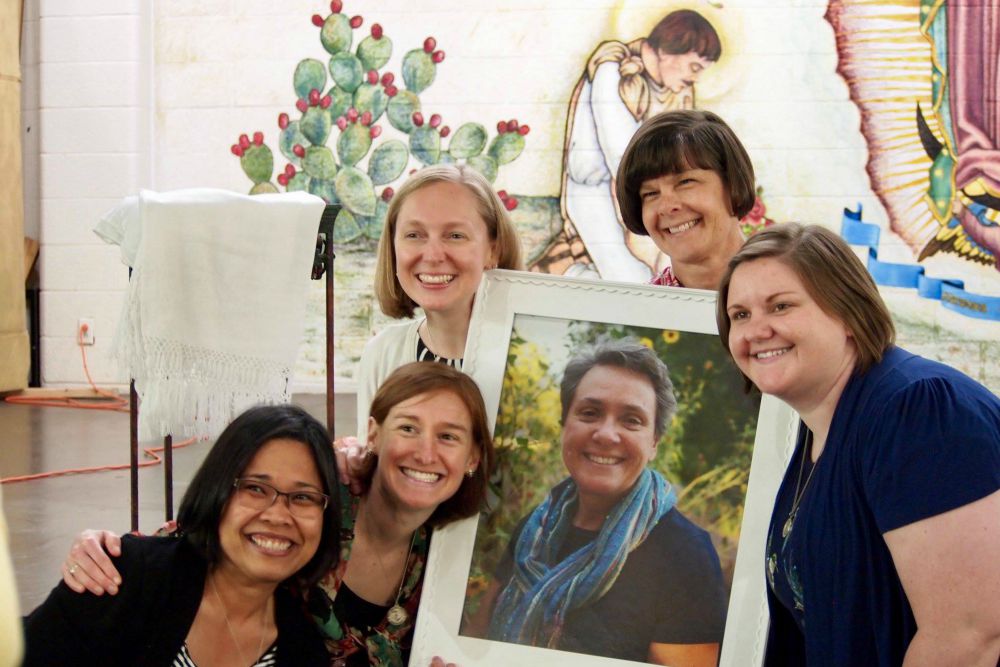 The five women Janet directed in initial formation, together at her Resurrection Liturgy in El Paso, Texas, April 26 (Provided photo)

It was November of 2007 when I first met Sister of Charity of Cincinnati Janet Gildea. I needed a place to stay near El Paso, Texas, while researching for my senior thesis. Two different people suggested I contact Janet, and she responded right away with, "We'd be happy to help in any way we can!" I could never have guessed how that connection would change my life.

I spent a few days with Janet and her sisters at Casa Caridad, a home imbued with generous hospitality and clear commitment to the mission of Jesus. A few months later, I heard from mutual friends that Janet had been diagnosed with advanced ovarian cancer — and survived. Janet stayed in touch with me during my two years of volunteering with Rostro de Cristo in Ecuador, especially when I felt inklings of a call to religious life.

In 2010, I moved into Janet's community as a lay volunteer and discerner, and two years after that, I joined the Sisters of Charity. In all the twists and turns of the journey since, Janet has been a constant. Now, I am preparing to profess my final vows, and — I still can scarcely believe it — Janet is gone. Her cancer returned over the last few years in various metastases, and relentless brain tumors finally overtook her on April 4. She would have been 63 years old September 11.

The world just feels different without Janet. There is a gaping hole once filled with her brilliance, energy and love. As the months pass by, it becomes more real that I'll never get another email from her, never receive her wise guidance from the other end of a phone call, never eat her phenomenal cooking, never hear her laugh at her own jokes, never be swept up into one of her visionary ideas, never … never … never. Some days, I gasp under the weight of the endless "never agains."

No, really: Life goes on. Even as the immensity of Janet's earthly absence becomes real, so does her new mysterious presence among us. Janet believed fervently in eternal life and the communion of saints. As she approached death, she shared her awe-filled excitement about the "great reunion" to come. I can't help but smile to think of her among all the faithful departed — from Mary, to Elizabeth Seton, to her parents, to beloved Sister-mentors gone before, to people of all times and places, all basking in the unfathomable love of God for whom Janet lived her whole life.

In those last days, Janet was just as certain about her ongoing connection with us. "Look out for lots of inspiration from the other side," she told me, both of us fighting tears as I clasped her hand at her bedside. Then, she pointed to her heart, promising to always be there in mine. Of course, I would desperately rather have her in the flesh, but at my core, I know she is alive, fully, in ways that transcend my understanding. Our relationship is changed but not ended. As she's been since the day I met her, Janet remains a companion on the journey.

Elizabeth Johnson says it this way in her book, Truly Our Sister: "[T]hose living on earth" and "those with God in glory … form a circle of friendship centered on the graciousness of the living God." It is only knowing myself held in this expansive, timeless communion, of which Janet is part, that I've been able to bear the unpredictable ache of grief.

I went on retreat about two months after Janet died, and my chaotic semester ended; finally, I had a moment to begin to absorb the gravity of what had happened. The first day was the Feast of the Visitation. As I sat in the stillness of my cabin that evening, tears began to flow for the woman who was my Elizabeth. Mary's "How can this be?" gushed out of me as a lament. "How can this be — that you're gone, Janet?" I cried into the night. "How can it be that we will never make new memories? How can it be that future Sisters of Charity won't know you? How can it be that you won't be at my final vows?" I sensed Mary and Elizabeth there with me in the stinging pain, perhaps snuggled on either side, enveloping me in an embrace that knows the bond of women across generations.

A few days later was the Feast of the Ascension. I felt accompanied by the earliest disciples who had followed Jesus faithfully, lost him abruptly to brutal execution, and then found strength to carry on his mission post-resurrection. Just as Jesus did with his disciples, Janet had met us where we were at, called us into a mission, and journeyed with us to form us into ministers for the reign of God. She was a stronghold, a charismatic leader that touched so many and held so much together. And now, she was gone, and everything was different. My ancient Christian forebears encouraged me: "Don't stand there, looking up at the sky! Through the risen Christ, Janet will be with you always. And through the Spirit, that same One that empowered us, you will know how to carry the mission forward together."

Last week, as Janet's 63rd birthday approached, sadness washed over me. It was a lonely sadness, because at graduate school, I'm away from others who really know and love Janet. I reached out to community members in Cincinnati and El Paso, and we planned a virtual, video-chat Janet celebration. My intercongregational CTU (Catholic Theological Union) community also offered to commemorate the day with me. Deeply touched, I decided to cook a birthday breakfast in Janet's honor; she always loved a full table around a delicious meal. Suddenly, shared with others in love, a day that I dreaded took on a whole new spirit. In our CTU kitchen and across the miles, Janet came to life in stories, laughter, prayers, tears — and her favorites, bacon and Graeter's ice cream.

The Gospel passage on Janet's birthday was the Lukan version of the Beatitudes, but at liturgy, our presider Fr. Mark Francis chose to highlight the Matthean "Blessed are those who mourn, for they will be comforted." He began by admitting that he had struggled with the audacity of this verse in the face of profound loss. How can mourning be blessed? With time, however, he has grown to understand the grace of grief in two ways: It is a deeply human experience and a sign of inextinguishable love.

Our God, by nature, is a dynamic communion of love. Created in God's image and likeness, is it any wonder that we, too, find our fullest life in relationship? Janet was deeply convinced of that truth, always gathering people together, making connections and sustaining them, and working in collaboration for the reign of God. Now, as I grapple with her death, I sense her reminding me from beyond to trust the power of community, held in God's graciousness. Even when grief feels unspeakable, solidarity and love carry us forward. Thanks be to God, life goes on.

[Tracy Kemme is a Sister of Charity of Cincinnati who authored the blog Diary of a Sister-in-Training during formation. After a decade in social justice and Hispanic ministry, she is working toward her master's degree in pastoral ministry at Catholic Theological Union in Chicago.]