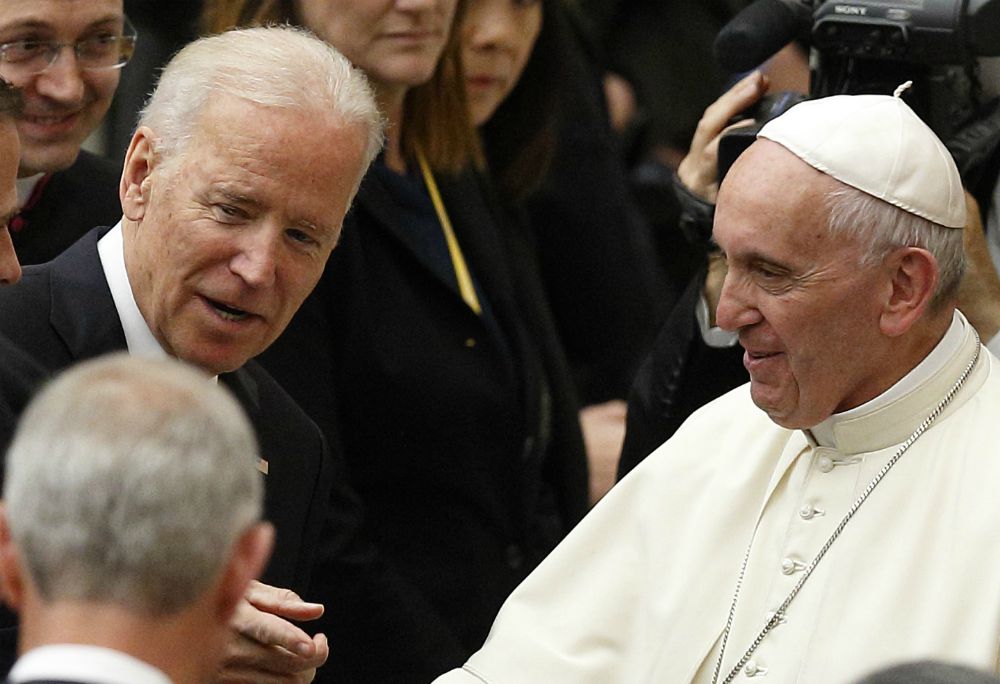 U.S. Vice President Joe Biden gestures as he meets Pope Francis after both leaders spoke at a conference on adult stem cell research at the Vatican April 29, 2016. (CNS/Paul Haring)

"I'm lucky that I have so much that's alive and healthy and vibrant," he insisted. "I've been really, really lucky."

So said Vice President Joe Biden during a taping of "The Late Show with Stephen Colbert" last week. On a purely professional level, it is almost impossible to argue with the former vice president. He was elected the sixth-youngest United States senator in 1973, serving for 36 years before spending eight years as President Barack Obama's second-in-command. While he is certainly not a universally beloved figure — is such a feat even possible in these polarized times? — Vice President Biden stands with leaders like Sen. John McCain and Gov. John Kasich as a rare politician who commands bipartisan respect. As Republican Sen. Lindsey Graham said in 2015, "If you can't admire Joe Biden as a person, then you've got a problem."

In the personal sphere, however, Biden has encountered tremendous loss. Several weeks after first winning his Senate seat, his wife and infant daughter were killed in a car accident that also left his sons Beau and Hunter with critical injuries. Two years ago, Beau Biden — a veteran and highly regarded politician in his own right — died following a two-year battle with brain cancer. His death is generally considered the reason his father decided not to seek the presidency in 2016.

I had the great fortune to sit in the audience as Vice President Biden affirmed his great fortune to Mr. Colbert. What was most surprising was that his claims of good luck referred not to his public career but to his private life.

It would be easy, understandable, and even justifiable for Biden to feel bitterness and anger after losing his son, feelings he expressed in Job-like anguish following his wife and daughter's death.

"I liked to [walk around seedy neighborhoods] at night when I thought there was a better chance of finding a fight," he later wrote of that period in his book Promises to Keep. "I had not known I was capable of such rage. … I felt God had played a horrible trick on me."

It is possible that he harbored similar emotions surrounding Beau's death when he was in the privacy of his home. But if he is bearing his son's memory as he relayed on "The Late Show," one gets the sense that there is a mysterious peace at play in Joe Biden.

Perhaps he feels compelled to convey hope and strength on behalf of his grandchildren and his son's widow. Maybe his faith comforts him with the belief that his son is not only present in the ones he loves but also truly with him in spirit.

Ultimately, I imagine  Biden understands what anyone who has undergone extraordinary loss knows: that it has an awful, powerful ability to strip life down to its starkest terms. These include the inconsolable agony Biden described after the death of his wife and daughter. But it also includes the wisdom Colbert talked about in this interview as well as the gratitude he once chronicled in a GQ article.

" 'What punishments of God are not gifts?' " asked Mr. Colbert, quoting J.R.R. Tolkien. "[I]t would be ungrateful not to take everything with gratitude. It doesn't mean you want it. I can hold both of those ideas in my head."

Wisdom and gratitude do not protect the soul from suffering again, but they do grant it a keener appreciation for the way that new life and new beauty always succeed death. In the case of his wife and daughter, Biden was blessed with two sons mature beyond their years ("I started looking up to my boys when they were in their teens," he told Colbert). In the case of his son, he is left with children and grandchildren who ask him to "tell more stories about Daddy," who help carry Beau's legacy and give Joe Biden a purpose to make "Beau proud of me."

Shortly before Biden took the stage, Dead and Company performed two songs that appeared on a later episode of "The Late Show." Consisting of several surviving members of the Grateful Dead and John Mayer, the group attracted a number of Deadheads to the audience, including one who wore a shirt embossed with the words "Make America Grateful Again."

It was an appropriate message, given Biden's role in the political arena and his reflections that evening. And it is a message any of us can take to heart this Thanksgiving — as individuals, in our respective communities and, dare I say, even in our country.

What is wonderful about this brand of gratitude is its honesty. It does not brush complications, challenges, miseries or misfortunes under the rug with rejoinders to "Count your blessings!" or "Think of all you have!"

Rather, it is a recognition, won only by time and trial, that the finitude and suffering we all are bound to confront will also always come with a second act. Pain begets purpose. Loss is accompanied by love. Death gives way to life.

For this, we give thanks.