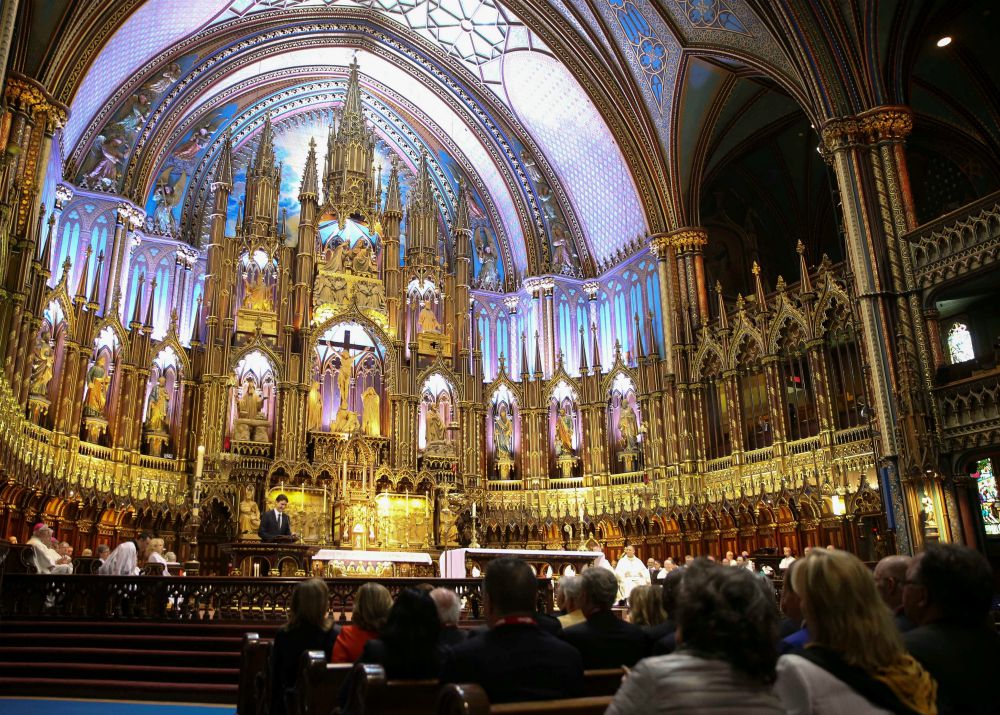 Not every Mass can be as varied as when Canadian Prime Minister Justin Trudeau addressed the congregation May 17, 2017 at Notre-Dame Basilica in Montreal for the city's 375th birthday celebrations. (CNS Reuters/Dario Ayala)

For the last several months, I have sensed a lull in my faith. Not a crisis or a dark night of the soul but a lingering place where I suspect many people spend a fair bit of time: a prosaic, middling area between the highs of sacred ecstasy and the depths of spiritual despair.

I still participate in the sacraments, attending weekly Mass and occasionally reconciliation. But reciting the Creed or singing from the hymnal feels perfunctory. It is another routine, like taking a shower or walking the same steps to work each day. Part of me wonders if the ancient church leaders who set the liturgical calendar had seasons like these in mind when they decided to call the months outside the dramatic events of Christmas and Easter "Ordinary Time."

This sense of ecclesiastical ennui would not be distressing were it not for past memories of transcendent prayers and sermons. The irony of committing oneself to religious observance is that the mystical moments that often draw someone to belief in the first place are never guaranteed to reoccur regularly, if at all. Jesus said, "The wind blows wherever it pleases." Presumably, he meant whenever as well.

From an outside perspective, these observations might not be particularly revelatory, because Catholicism can seem inordinately regimented. The songs and readings may shift each day, but the general structure has been pretty consistent, at least since the 1960s: introductory rites, Liturgy of the Word, Liturgy of the Eucharist, and concluding rites.

This all struck me as pretty boring when I was growing up. I was especially vexed whenever I visited churches of friends from other denominations. Their services felt new and dynamic, like each week was a new episode of a great TV show. Mine felt like watching the same movie again and again.

Gradually, my opinion changed, partly as a result of worshiping in other parts of the world.

Several years ago, I spent a weekend in Montreal and attended Mass at the breathtaking Notre-Dame Basilica. Though the Eucharist was in French — which I do not speak — years of participating in the Mass's rites allowed me to more or less follow along. Strangely, because I did not understand each word the priest said, I was more attentive to what he did, watching with fresh eyes as he consecrated the bread and wine. It was like encountering this astonishing act for the first time.

It is probably inevitable that our faith lives will involve their share of dullness and drudgery, just as our entire lives do. A weightlifter does not set a personal record every time she goes to the gym, and a married couple does not spend every date night enraptured with each other. Not only must we suffer the bad to get to the good; we need to tolerate the tedious.

One of the nice things about Catholicism is that it allows for us to continue practicing our faith, even in these moments of monotony. We can still kneel, stand, and repeat the Our Father when we are supposed to, trusting that God will hear and receive our prayers, no matter how mindlessly they were offered. As the oft-cited "Prophets of a Future Not Our Own" claims, "No statement says all that could be said. No prayer fully expresses our faith. No set of goals and objectives includes everything." When all that we do will be imperfect anyway, the effort must count for something.

None of this should be seen as an excuse to simply go through the motions or avoid digging deeper to explore what might be causing our disinterest. It is simply a reminder that there is value in showing up, even when we do not care or think we will get anything out of it — because none of us knows the day or hour this rarely changing tradition in honor of our never changing God will shake us from our apathy, revealing anew just how extraordinary what we ordinarily celebrate really is.