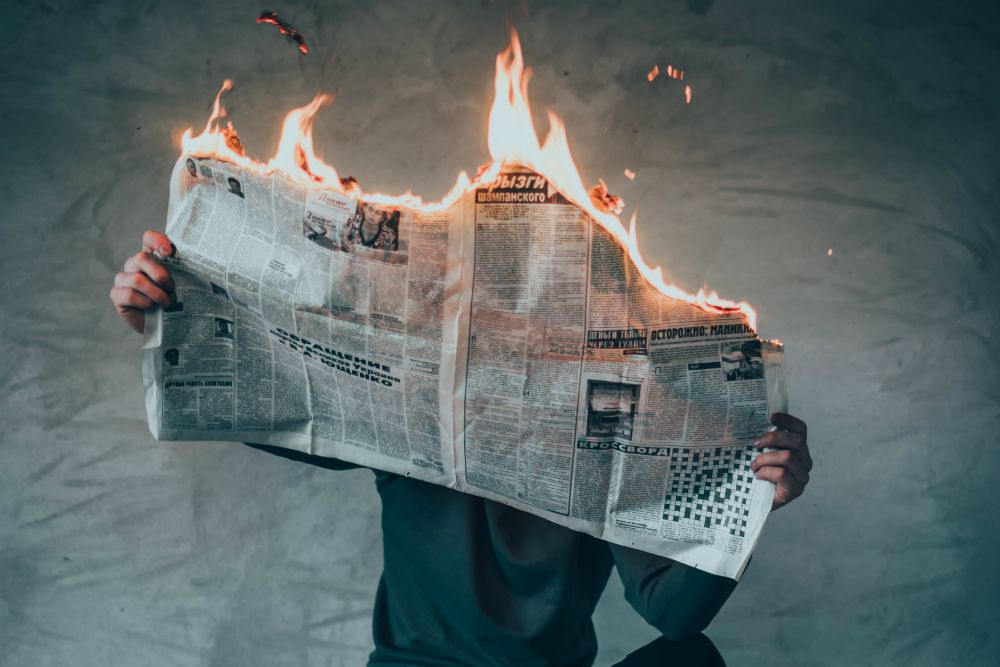 Over the past few months, several friends have shared that they are feeling something bordering on political burnout. In some cases, these are individuals who I suspect voted for Donald Trump in the 2016 presidential election, though they are quick to cite economic reasons or distance themselves from the president's most controversial remarks and positions. Now, whether out of disgust with negative headlines or frustration that even the most apolitical spaces no longer seem safe from vitriol, they are opting to reduce their news intake or eliminate it altogether.

"What happens in Washington," one reasoned, "has no impact here."

From a certain perspective, I appreciate the weariness. Some media organizations, while certainly not fake or "the enemy of the people," present vital information like they're introducing a soap opera cliffhanger, covering Congressional testimony like its reality television. In their defense, they are tasked with reporting on a president who does the same thing.

"Twenty-four-hour news networks are built for one thing, and that's 9/11," Jon Stewart told Chris Wallace of Fox News in 2011. "In the absence of that, they're not just going to say, 'There's not that much that's urgent or important or conflictive happening today, so we are going to gin up, we are going to bring forth more conflict and more sensationalism, because we want you to continue watching us 24 hours a day, seven days a week, even when the news doesn't necessarily warrant that type of behavior.' "

There is probably real value, then, in learning to filter the inane from the essential, to get to the heart of a matter before turning to the World Series.

It would be a mistake, though, to tune out entirely. Our leaders' incapacity to address mass shootings, inaction in the face of climate change, and other topics that fill news cycles and employ pundits really are make-or-break for some people. What happens in Washington really does have a deep impact on many lives, on people who cannot simply avoid a problem by ignoring Wolf Blitzer.

In the wake of a particularly terrible week — a Florida man sending pipe bombs to prominent Democratic leaders, public figures, and CNN, a white man murdering two African Americans at a Kentucky store, and yet another man killing 11 people at a Pittsburgh synagogue — some wonder whether Trump is culpable for the violence. I share in the discomfort some feel about blaming a public official's statements for someone else's behavior. There are plenty of examples of words twisted beyond their intended meaning for nefarious ends.

But as Aaron Blake pointed out in The Washington Post, Trump's routinely violent rhetoric is "a highly unique variable," unlike other politicians whose followers have sought to hurt others.

"This isn't normal," wrote Blake. "It's an aberration. And it's possible it might produce aberrant results."

As Mr. Blake notes, this is not "to say that Trump is definitely to blame." But do we really believe our conduct, let alone that of the president of the United States, has no consequences? If we acknowledge that action begets reaction, to what end do we think these calls to violence lead us? Even if we feel it is unfair to hold the president responsible for the brutality of a supporter whose legal troubles predate Trump's entry into politics, surely we can concede that it is to our society's detriment when he praises a Congressman for body slamming a journalist, tells an audience to "knock the crap out of" protestors, and, like the synagogue shooter, spreads false conspiracy theories about a migrant caravan.

My point here is not to say Trump caused Cesar Sayoc Jr. to mail bombs or caused Robert Bowers to shoot Jewish worshipers. I'm not sure we can answer that question without first grappling with why we have a president who speaks in a way that causes us to ask it in the first place.

Instead, I want to raise the idea of accountability, to suggest that our leaders, all of us, are responsible to each other, for the evil we have done and the good we have failed to do.

This is especially important to bear in mind several days before the midterm elections. Electing any candidate at a certain level of power will inevitably result in their making some decisions with which we disagree. In these moments, it is inadequate to resort to, "This doesn't have anything to do with me" or "That's not why I voted for him," particularly when the official explicitly campaigned on their desire to pursue the policies to which we object.

You may like a politician and his colleagues when they pass tax cuts and appoint new judicial nominees while abhorring when they defend white supremacists and hostile foreign powers, mock a victim of an alleged sexual assault, separate children from their parents, display antipathy toward refugees' plight, or do little to curb these appalling impulses. But then you are obliged to do something about it. If our leaders carry themselves in a way that undermines your values or the common good, call their offices. Write to your local newspaper. Vote for someone else. But don't change the channel, wash your hands, and say, "This doesn't affect me." Because chances are it affects someone else, and if we really believe the things we say and do matter, then we are called to respond to the degree that we can.

"A friend told me that he doesn't want to listen to the news anymore," wrote Patti Davis, President Ronald Reagan's daughter, in a poignant op-ed following our violent week. "He wants to be ignorant of what's going on because the stress and the fear are too much to bear. I answered him that we're all responsible now for tending to one another's wounds, and if you stay blind to what those wounds are, you can't help."

"If your child is feverishly ill, it can be very fatiguing to … take care of her," said David Frum, a former speechwriter for President George W. Bush and an outspoken critic of Trump, in an analogy for news fatigue. "But it's what you do, because that's your duty … [And] if your country is ill, you have the same responsibility."