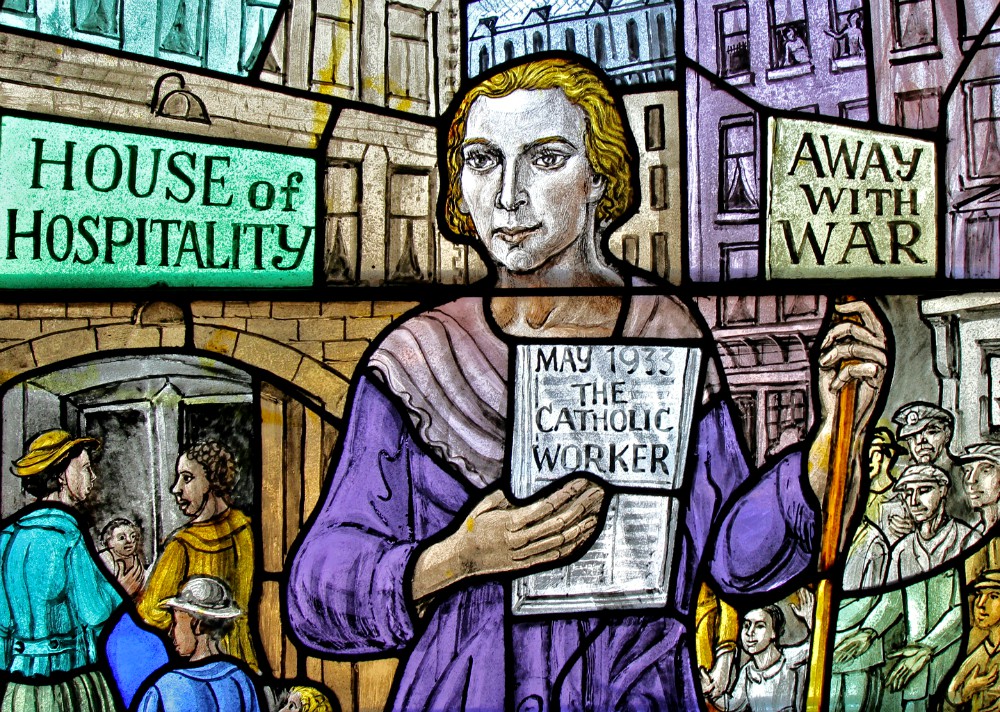 Dorothy Day is depicted in a stained-glass window at Our Lady of Lourdes Church in the Staten Island borough of New York. (CNS/Gregory A. Shemitz)

One day this past spring while reading The Catholic Worker, my sister-in-law tagged me on a post, a request, from the Facebook page of the Dorothy Day Guild. They were looking for people to help transcribe Dorothy's diaries, a needed component in her ongoing cause for canonization. I responded as quickly as possible because who wouldn't want to help make a saint? Then again, who really makes a saint?

I passed the vetting process and by April 24, I submitted the transcription of the 20 pages of diaries I was given. Please note, I didn't have the diary itself. Dorothy's diaries are kept at the Marquette University library. I will remember this as well as I remember anything else in life because the library's watermark made it exceedingly difficult to read or discern various words on every page.

After I passed the interview, but before I received the instructions on the formatting, deadlines and how this fits into the process of making one a saint, I attempted to explain to my daughter what I would be doing, what she could do with me, in helping to make Dorothy Day a saint. Trying to explain the canonical process of sainthood to my 4-year-old was yet another parenting fail.

I will try once more to explain how we got to the diaries and how sainthood works in the church. In 2000, Cardinal John O'Connor of New York asked the Congregation for the Causes of Saints in Rome to consider Dorothy Day's canonization. O'Connor agreed with Dorothy's protégés that she should be formally identified as a saint, because of how she lived her life. Then, from my outsider's perspective, not much happened for a few years.

Dorothy received the title servant of God, while the formal investigation into her life began. By 2012, after the New York Archdiocese had done some legwork investigating Dorothy's life, the U.S. Conference of Catholic Bishops provided a unanimous formal endorsement of her cause. Google tells me this led to the canonical inquiry; if we went over the sainthood process in CCD, I surely do not remember.

Things continue to progress as a coordinator was hired to prepare an official biography, to interview 125 eyewitnesses, and to assemble authentic copies of all of Dorothy's writings, published and unpublished, all of which gets sent to Rome. That's where I came in, in April, helping to transcribe Dorothy's unpublished diaries as required in this process. There are also canon lawyers involved and a lot more convoluted, confusing-to-me steps in the sainthood process.

To learn more, I'd recommend consulting your friendly neighborhood canon lawyer, or if you don't have a friendly neighborhood canon lawyer, watch a few YouTube videos. Recall that Dorothy remains a servant of God, but if one progresses in the sainthood process — which requires a handful of miracles — it's servant of God, then venerable, then blessed, and then and only then can you move to the official sainthood recognition.

One evening during the transcribing, my Catholic guilt set in. My daughter asked me what a diary was. I realized in her question that I was reading, transcribing and sending for other people to read Dorothy Day's personal thoughts and schedule. I was like the parent who discovered their child's diary, but worse than read it, I shared it with others!

At least in the 20 pages I had, I assure you there was nothing salacious. In fact, I now believe that, if not an activist or journalist, Dorothy would have made an excellent meteorologist as she made frequent mention of the weather in her diary.

Dorothy was known to ruminate on Dostoyevsky's observation that the "world will be saved by beauty." I would like to concur, but I assure you, Dorothy Day's handwriting was anything but beautiful. While the words I transcribed were nearer the mundane, I remain fascinated and edified to glimpse the thoughts and ideas of a few days in the life of Dorothy Day. She was, from the 20 pages I saw, someone who focused on, received and shared beauty. Perhaps she was impish, but she was not destructive; she was faithful and oriented toward Christ, but not sanctimonious. 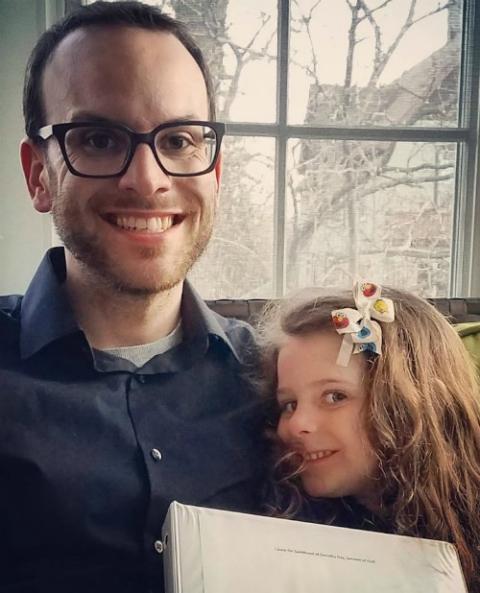 Twenty pages is not a representative sample of the totality of her own writings, but they comport with the consensus of who she was and I'm grateful to see the integrity between her published works and words and these unpublished words. My wife assisted me, too, as some of Dorothy's words were very hard to read, so hard that they had to remain marked as "indecipherable" in the final document.

Through this process, I remain convinced that my wife and I chose a good role model — a saint — for our daughter to share a name and to emulate as she matures in faith and life. My wife and I can remind our daughter about her now real connection with Dorothy Day, as I made sure our daughter typed a few letters on the keyboard. Unfortunately, we named our son George DeSales, after Francis DeSales, which means George missed out on that transcription process by a mere 350 years.

An oft-quoted quip of Dorthy's was, "Don't call me a saint. I don't want to be dismissed so easily." Well, should I ever join the communion of saints, I would tell Dorothy: We didn't make you a saint. You did that to yourself! The first and only time a pope has addressed the U.S. Congress, you were one of the four pivotal persons in his speech. No one easily dismisses you, or your legacy. A legacy that lives on with vibrancy in your newspaper, in Catholic Worker houses, and in every person who knows there is too much work to do to feel hopeless, and no human being who can be labeled as the undeserving poor.

Who makes a saint? After partaking in a very small role in the cause for canonization for Dorothy Day, the best answer I have is this: Through responding to the grace of God, we can make ourselves into saints. As such, neither my daughter, nor I, nor anyone formally working on Dorothy Day's canonization is making her a saint. Dorothy Day is a saint because she lived a life of heroic sanctity, just like most of us strive to do each day — or at least strive to do every couple of days.

Beyond sainthood, I too share Dorothy's sentiment of not wanting to be dismissed so easily. Thankfully, there's nothing about the process for canonization that is easily dismissed. Dorothy Day, pray for us.

A version of this story appeared in the Dec 13-26, 2019 print issue under the headline: Transcribing Dorothy Day: Who wouldn't want to help make a saint?.