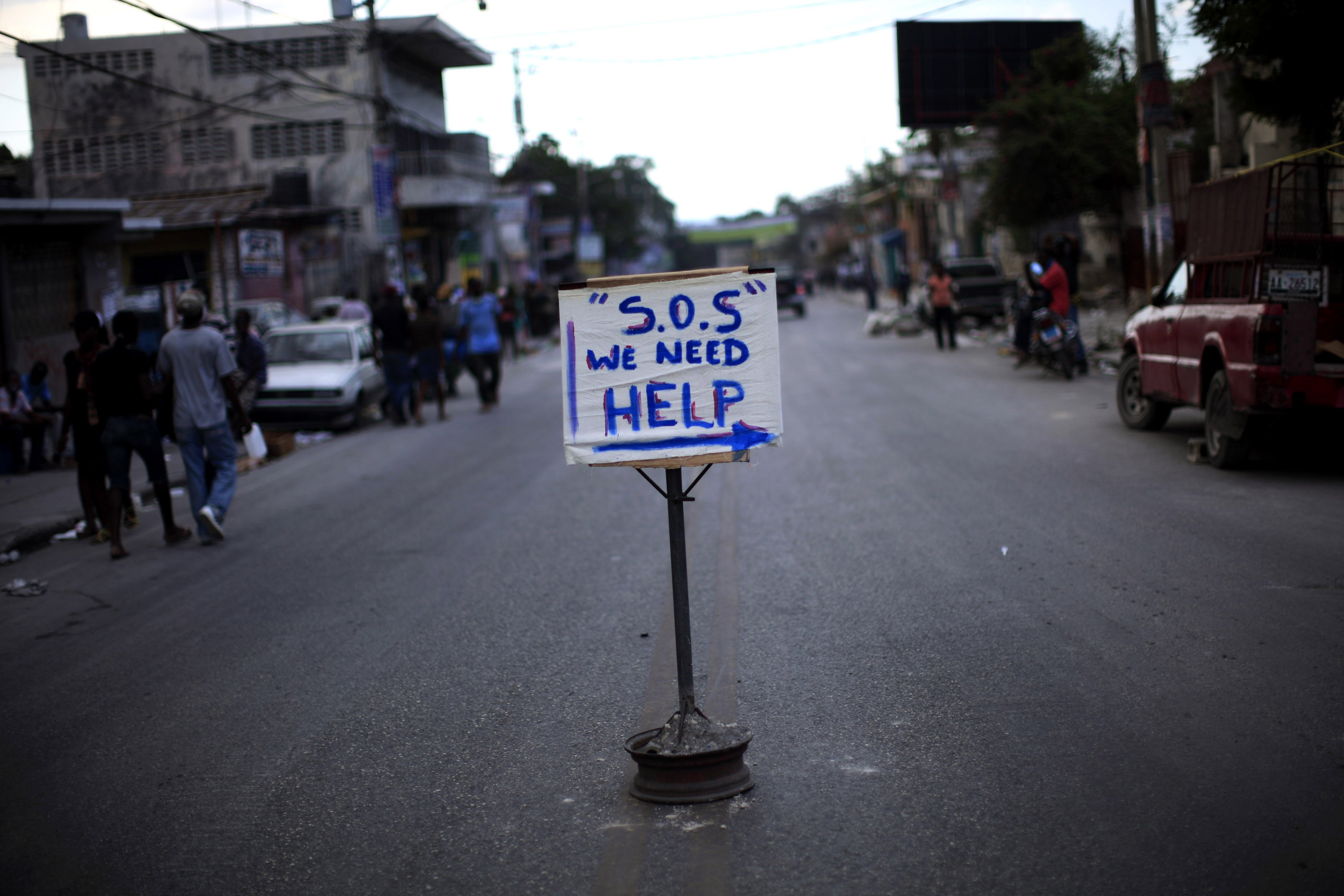 A sign that reads "SOS we need help" is seen in the middle of a street in Port-au-Prince, Haiti, Jan. 16, 2010, following a catastrophic earthquake. As survivors sought food, water and medical help, world leaders pledged aid to rebuild Haiti after what the United Nations called the worst humanitarian crisis in decades. (CNS/Reuters/Carlos Barria)

President Donald Trump routinely focuses his ire on a long list of favorite targets, including his predecessor, his opponents in the 2016 primaries and general election, various members of his Cabinet, and the free press.

The consistent substantive theme of the president's attacks are people or institutions that dare behave in a way that does not serve him or his political interests, while the stylistic tie between them is an aversion to what he calls "political correctness" and what others call "decency."

According to the president and his supporters, Trump's visceral, gut reactions tell it like it is and demonstrate his willingness to speak uncomfortable but important truths others are too skittish to acknowledge. As a 2015 editorial published in The Washington Times explains, "Mr. Trump says what nearly everybody thinks, but is too fearful or polite to say. He says it in a rough and coarse way, which deserves rebuke, but rebuke wouldn't be necessary if other, housebroken politicians had the courage to say the things he says in a softer way."

Take the president's alleged reference to Haiti, El Salvador, and African nations as "shithole countries" as a pretext for barring people from those locations from coming to the U.S. Maybe it was uncouth, his defenders reasoned, but were the people who chastised Trump really prepared to argue that these were nice places to live?

I have never been to Haiti or El Salvador, but I presumed neither country is a nice place to live. The World Bank more or less confirms this, reporting that El Salvador is Central America's "slowest growing economy," while Haiti is "the poorest country in the Americas and one of the poorest in the world." As articles in The Atlantic, The Nation, and the Council on Foreign Relations note, however, the U.S. has not exactly been an innocent bystander in prompting and provoking these countries' difficulties.

Having previously challenged my facile, preconceived notions about so-called "developing countries" by actually living in them, I knew the best way to truly understand a place is to spend time there. Absent that opportunity, the next best avenue is to talk to someone who has.

Nancy Lanni is a retired public school teacher from New York. After 31 years teaching at Saugerties High School, she traveled to Haiti with a construction team following the 2010 earthquake. There, another English teacher invited Lanni to assist in covering night classes.

"I was hooked," she recalls. "The adults and young adults were incredibly eager and gracious learners."

In 2012, Lanni spent five weeks teaching with a Wesleyan mission on Gonâve Island. On a Haitian acquaintance's suggestion, she visited a mountain school in Bwa Chandel, where she found students attending classes in a floorless church without books or learning materials. Recognizing the need for a building with separate classrooms for each grade, Lanni helped found The World is One Place, an organization dedicated to providing education to Bwa Chandel's children.

"Anytime we had a few dollars, we did that much work, which is the way lots of things in Haiti are built," Lanni explains. "The Haitians were very patient with this process. I have had to learn patience from them."

Lanni and her collaborators finished building the school in December 2016 and are near completion on a cistern to collect rainwater from the school's roof. They also launched Bibliotek Burik, a mobile library that involves a donkey carrying books to children. In addition to its construction projects, The World is One Place emphasizes teacher support.

"Organizations that have child sponsorship are, of course, well meaning," she says. "But kids without sponsors get sent home from school if their parents can't pay. And most families go without food and medicine to send their children to school. Support for one teacher actually supports a whole class of students."

In some ways, Lanni can relate to the one-dimensional impression many Americans might have of Haiti.

"I only knew it as the poorest country in the Western Hemisphere," she says. "I didn't know its history of independence, its loving people, its natural beauty. People in the states don't really want to hear much about my work there. Most of the time they just say, 'How was your trip?' I say 'Fine,' and that's as far as it goes. The rest I keep inside — the joy, the sorrow, the frustration, the despair, and the courage I see day-to-day."

Wyatt Massey, a human rights journalist and former O'Hare Fellow with America magazine, moved to Haiti last year to work as a communications fellow with Children's Nutrition Program of Haiti, a Haitian-led nonprofit. Before beginning his assignment, he had his own misconceptions about Haiti, but a fascination with its checkered past with the U.S. led him to study the country's history.

"I realized how much influence the United States and other Western powers had on Haiti," he says, "whether it was not recognizing it as a country for almost a century or some of the import problems that have happened. There's a lot of history when Haiti as a nation is devalued in the world. And that has led to a lot of problems."

It was the earthquake's eighth anniversary when Massey and his coworkers heard Trump's reported comments about the country.

"It was a day that was already very somber," he remembers. "Especially with the colleagues I know, who had lost their parents, lost brothers and sisters, lost children in the earthquake. On top of that, learning that the president had explicitly said something like that, people were understandably upset. It was sort of hard to explain why someone would say something like that, so explicitly hateful. I think with a little bit of time, and just sort of reflecting on it, having someone characterize an entire country or an entire group of people as lesser than, historically, is just a way to degrade people."

Massey eloquently reflected on the experience in an America essay:

"An assessment of a country's living conditions says nothing about the people who live in those conditions," he wrote. "Crumbling infrastructure, inadequate health care and crippling poverty do not make a life any less valuable."

After the initial hurt from the president's comments, Massey says his Haitian friends quickly moved on.

"I talked to friends in the United States [who said] that the 'shithole' comment was still leading news days and weeks after it happened," he says. "In Haiti, after that first day, it just really wasn't discussed. The way it was explained to me was Trump said something very explicitly, but it was saying something that had been shown historically between the U.S. and Haiti: not recognizing Haiti as its own country, taking advantage of it with economic policies, the way Americans will come to Haiti and set up programs or try to do development without really talking to locals at all. The idea that the notions and ideas that we have as Americans are the right way and that anyone in Haiti has to be subservient to the American, because we're from the greatest country in the world; there's no way we can be wrong.

"It almost wasn't surprising that the president would say that. Maybe it was surprising that he would say it explicitly. But the fact that that comment came out, it really wasn't as explosive to the people that I knew in Haiti as it was to Americans."

In this context, Trump has a point about his war on political correctness: he is revealing something the rest of us are afraid to admit. The problem is that he is not showing us life as it is; he is showing us life as he and we imagine it to be without ever testing our assumptions.

Anyone can scroll through Twitter, read a newspaper article, or watch a cable news show and conclude what they will about the state of the world.

It is telling that the president's remarks saddened but did not shock Massey's Haitian colleagues. Perhaps they have a keener grasp on the real world political correctness supposedly prevents us from seeing, while also understanding the existence of a fantasy world divided into paradises and shitholes.

Anyone can scroll through Twitter, read a newspaper article, or watch a cable news show and conclude what they will about the state of the world. If the opinion they reach seems impolite, they might even come to believe that political correctness it to blame for our failure to address the problem.

Generally, though, the trouble with attacks on political correctness is not that they defend impropriety, though they usually do; it is that they justify a worldview that simply is not accurate.

Lanni and Massey realized this in Haiti, but we do not need to travel that far to learn the same lesson. We simply need to treat our gut reactions as an invitation to dig deeper.