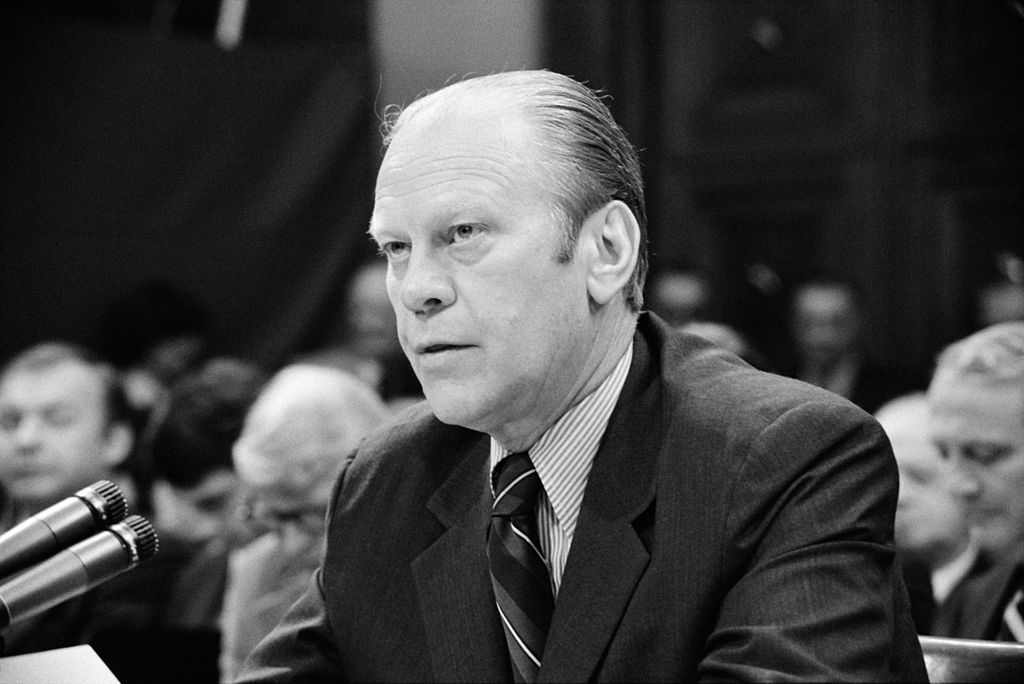 Last month, the Siena College Research Institute released a survey gathering 157 scholars' rankings of the U.S. presidents. I usually greet polls like these with a mix of absorption and apprehension. On the one hand, I'm always curious to see if there has been a re-evaluation of a previously underappreciated commander in chief, as happened with Harry Truman. On the other, these scholars tend to agree that the Oval Office’s current occupant isn't exactly top squad material, a reminder that the president’s detractors probably do not need and that his supporters probably do not find convincing.

There is one head of state I always look out for, wondering if his service might get the generous reappraisal Truman's did. I continue to wait in vain. Gerald Ford seems destined to be disregarded, with people more curious about the unprecedented circumstances under which he entered the White House than any major accomplishments he achieved while there. That is a shame, because Ford's unusual ascendance to the presidency reveals his singular strength.

Ford was a member of the House of Representatives since 1949, becoming minority leader in 1965. He supposedly had no aspiration to join the executive branch, instead hoping to become Speaker of the House.

But in 1973, Vice President Spiro Agnew resigned after being accused of engaging in extortion, bribery and tax evasion. The Democrats — who controlled the House at the time — made it known to President Richard Nixon that Ford was the only candidate they would accept to replace Agnew. Ford had not even moved into the official residence of the vice president when Nixon himself resigned in 1974 amid the Watergate scandal.

Previous presidents had assumed their position under clouds of illegitimacy, having taken over after a president's death or triumphed in the Electoral College while losing the popular vote. No one, however, had ever taken office without having appeared on a ballot as a presidential or vice presidential candidate. Other than his colleagues in Congress, the constituents of Michigan's 5th District were the only people who had ever voted for Gerald Ford.

The new president could have defensively clung to the constitutional basis for his status and begun consolidating power the way his predecessor had. Instead, he acknowledged the atypical nature of his promotion with modesty.

"I am acutely aware that you have not elected me as your president by your ballots, and so I ask you to confirm me as your president with your prayers," he said after taking the oath of office. "Those who nominated and confirmed me as vice president were my friends and are my friends. They were of both parties, elected by all the people and acting under the Constitution in their name. It is only fitting then that I should pledge to them and to you that I will be the president of all the people."

Again admitting the degree to which he would depend on others in his new job, Ford closed by promising "to do what is right as God gives me to see the right, and to do the very best I can for America. God helping me, I will not let you down."

For Ford, doing what was right as God gave him to see the right would mean pardoning Nixon. It was controversial, with many suggesting Ford and Nixon had engaged in a corrupt bargain to grant the former the presidency and the latter clemency. Ford's press secretary resigned, saying "that it set one man above the law."

But many historians have come to see Ford's decision as wise, helping the country to move on from Watergate and allowing the president to focus on the Vietnam War, inflation and other issues facing his nascent administration. Bob Woodward, one of The Washington Post reporters whose work brought down Nixon's presidency, would eventually call the pardon "an act of courage," while John F. Kennedy's family would give Ford the JFK Library's Profile in Courage Award.

Regardless of one's opinion on the pardon's merits, Ford's explanation of it is extraordinary, a surprising window into a president deliberating a tremendous dilemma.

"The Constitution is the supreme law of our land, and it governs our actions as citizens," said Ford. "Only the laws of God, which govern our consciences, are superior to it. As we are a nation under God, so I am sworn to uphold our laws with the help of God. And I have sought such guidance and searched my own conscience with special diligence to determine the right thing for me to do …"

Ford went on to lay out his fear that in the lengthy lead-up to a trial of a former president, "ugly passions would again be aroused. And our people would again be polarized in their opinions. And the credibility of our free institutions of government would again be challenged at home and abroad."

The president described his primary consideration as "the greatest good of all the people of the United States, whose servant I am," while also explaining his duty "to be true to my own convictions and my own conscience.

"My conscience tells me clearly and certainly that I cannot prolong the bad dreams that continue to reopen a chapter that is closed. … I do believe that right makes might and that if I am wrong, ten angels swearing I was right would make no difference. I do believe, with all my heart and mind and spirit, that I, not as president but as a humble servant of God, will receive justice without mercy if I fail to show mercy."

But why does any of this matter today?

For starters, in the absurdly long run-up to a presidential election, with all the grandstanding involved in candidates claiming they are uniquely qualified to hold the world's most powerful station, it is refreshing to remember that humbler "servant" leadership was possible not so long ago.

Courageous leadership was, too. Ford surely knew that granting Nixon a pardon would hurt his chances of winning his own term in the White House, which it arguably did when he lost the 1976 presidential election to Jimmy Carter.

There are also spiritual lessons in Ford's presidency. His mining the depths of his conscience and weighing the various factors surrounding Nixon's drama mirror Ignatian discernment, while his frequent invocation of a higher power reflect a genuine desire to follow God's will, as opposed to the all-too-frequent use of religion for nakedly political purposes.

Like St. Louis Martin — who gave up dreams of entering the priesthood before fathering St. Thérèse of Lisieux — Ford demonstrated a willingness to accept a vocation other than that which he had envisioned for himself.

"I have not sought this enormous responsibility," he said immediately after taking office, "but I will not shirk it."

Finally, in times that can feel profoundly divisive and unforgiving, Ford is a model of the immeasurable value of mercy, an example he reinforced when offering conditional amnesty for draft evasion and desertion during the Vietnam War. Recognizing this, Jimmy Carter's first words as president were "to thank [his] predecessor for all he has done to heal our land."

In Ford's memoir, he recalled his mother using Rudyard Kipling's poem "If" to help him control his temper when he was angry as a child. The poem's final stanza reads:

If you can talk with crowds and keep your virtue,

Or walk with Kings — nor lose the common touch,'

If neither foes nor loving friends can hurt you,

If all men count with you, but none too much;

If you can fill the unforgiving minute

With sixty seconds' worth of distance run,

Yours is the Earth and everything that's in it,

The virtue and common touch Kipling details may be too uncommon. Yet Ford shows that they are not impossible, that they are qualities we have a right to call for not only in our leaders but in ourselves.

[Brian Harper is an interim research associate with the Council on Foreign Relations and alumnus of Fordham University's Graduate Program in International Political Economy and Development. A Marquette University graduate, he previously worked in communications with the Midwest Jesuits and served as a Jesuit Volunteer in Peru. His writing has been featured in America, the Milwaukee Journal Sentinel, Counterpunch, Micand various other publications. You can read his work and listen to his music at www.brianharper.net.]

A version of this story appeared in the April 19-May 2, 2019 print issue under the headline: The unappreciated spiritual legacy of Gerald Ford.