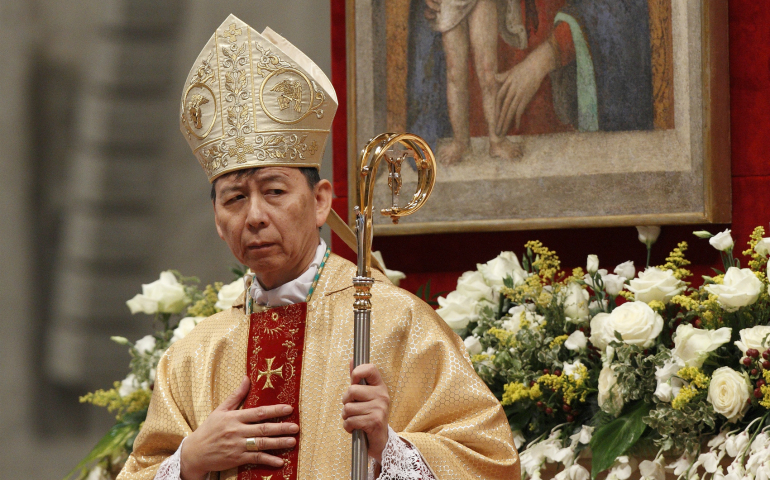 Archbishop Savio Hon Tai-Fai, secretary of the Congregation for the Evangelization of Peoples, pictured in a 2011 photo at the Vatican. (CNS photo/Paul Haring)

The papal appointee given authority to take charge of a Guam archdiocese rocked by allegations of sexual abuse against its archbishop has said the Vatican is preparing to put the prelate on trial.

Archbishop Savio Hon Tai Fai, who Pope Francis appointed in June to step-in over Agana Archbishop Anthony Apuron, told reporters Tuesday that "they just formed all the conditions for the trial."

"I'm going to receive some news, some updates later," said Hon, who has been serving as the archdiocese's apostolic administrator while also remaining the second-in-command of the Vatican’s Congregation for the Evangelization of Peoples.

Francis has sought to act firmly against clergy sexual abuse, and such a trial would be the Vatican's first of a prelate accused of abuse. A similar trial had been organized in 2015 for a Polish archbishop who had been accused of abuse, but the prelate died before the beginning of the proceedings.

A coadjutor bishop is a prelate who is normally appointed by the pope to a diocese with the idea of taking over for the current diocesan leader when he dies or retires. Coadjutor bishops have right of succession, meaning they automatically become diocesan leaders should the previous bishop die in office.

Hon explained that Francis had appointed Byrnes to have special faculties over the Agana archdiocese, saying: "This appointment suggests a more permanent solution."

"As a matter of fact, in this appointment the Holy Father has expressly granted His Excellency Msgr. Byrnes all the faculties, rights and obligations of the archbishop of Agana, civilly and ecclesiastically without any exception," Hon continued.

"In other words, as coadjutor archbishop, Msgr. Byrnes has the complete right of responsibility over everything concerning the archdiocese," said Hon.

Byrnes told KUAM TV that he would visit the Pacific island nation in late November and then move there permanently in January. About 80 percent of Guam's 162,000 residents are Catholic.

Apuron, 70, has been accused of having inappropriate physical contact with at least five young boys in the 1960s and '70s. The allegations emerged in May when one of the boys, now 52, came forward, prompting others to do the same.

Apuron has denied the allegations, and Guam civil authorities have not charged him with any crimes.

Hon had previously told Guam's Catholics that he expected Apuron to undergo a canonical trial, saying so in a September letter he sent to each of the island's 26 churches.

The pope signed a new universal law for the Catholic church last June that specified that a bishop's negligence in response to clergy sexual abuse can lead to his removal from office and empowered four Vatican offices to initiate processes of removal when necessary.

That move was the subject of criticism from some survivors' advocates, who said it did not live up to an earlier promise to create a new Vatican tribunal to judge bishops who do not act appropriately when told of allegations of abuse.