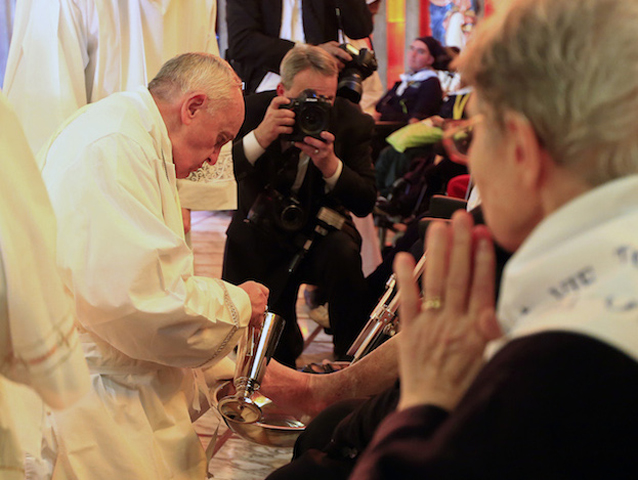 Pope Francis washes a foot of a disabled person at the S. Maria della Provvidenza church in Rome, during the Holy Thursday celebration, on April 17, 2014. (Reuters/Tony Gentile)

Pope Francis has changed the rules so that a priest may wash the feet of women and others in the community and not just men, as church law had previously decreed.

The change, announced Jan. 20, reflects Francis’ own groundbreaking gesture when, just a month after his election in 2013, he washed the feet of young people -- including women and Muslims -- at a youth detention center outside Rome.

That act upset many traditionalists who argued that the pope should follow church law while others say the rules required that only men should be chosen because the rite recreates Jesus’ action at the Last Supper when he washed the feet of his twelve male disciples.

The Catholic Church believes that episode, on the night before Jesus was crucified on Good Friday, marks the formal institution of the all-male priesthood. So any move to broaden those whose feet are washed by the priest -- taking the role of Jesus -- could raise questions about ordination.

Thursday’s action is likely to further inflame those debates, but it’s clear this is part of the pontiff’s long-term campaign for reform in the church.

In fact, while the official change was announced in a decree issued Thursday by Cardinal Robert Sarah, head of the Vatican liturgy office that sets rules for celebrating Mass and other rites, the Vatican also released a letter from Francis to Sarah in December 2014 in which he asked him to make changes so that the rite “might fully express the significance of the gesture performed by Jesus at the Last Supper.”

There was no immediate explanation for the lag time.