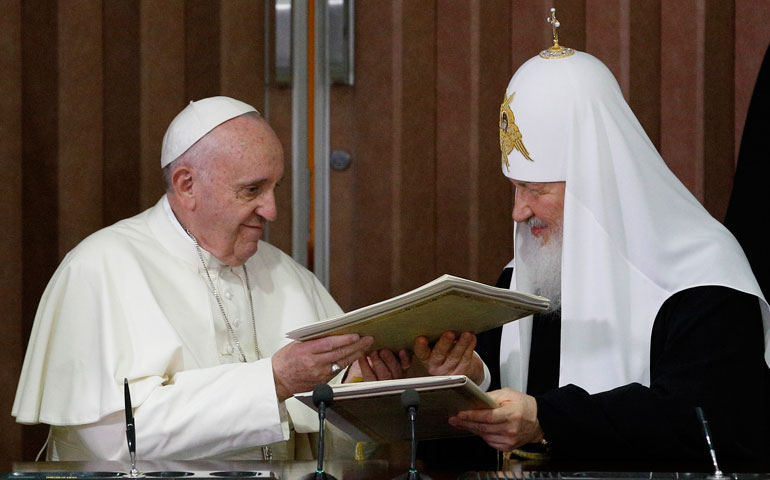 In the weeks following Pope Francis' meeting with Russia's Orthodox Patriarch Kirill in Cuba, predictions are still being aired about the wider impact on Catholic-Orthodox ties. But some church leaders are worried about the implications of the new closeness, and seek reassurances from the Vatican.

"We don't doubt the goodness of Pope Francis -- he's a humble man who's looking out for the good of the church," said Bishop Hlib Lonchyna from Ukraine's Greek Catholic church. "But there seem to be problems in how Rome understands the world. If you're raised in the West, you inherit a mentality which may well impede your capacity to grasp particular realities."

Ukrainian Catholics like Lonchyna have had reason to be concerned about the 30-point declaration that emerged from the Feb. 12 Havana airport encounter. Their church combines the Eastern rite with loyalty to Rome, and was brutally suppressed as an allegedly Westernizing force under Soviet rule, when its parishes and properties were forcibly handed over to Russian Orthodox bishops.

A similar fate awaited Greek Catholics in neighboring Romania and Slovakia, and the church has been locked in conflict with the Orthodox as a result since it revived in the early 1990s. Ties have worsened since war erupted in Ukraine two years ago, with Greek Catholics backing pro-Western forces and Orthodox leaders favoring links with Russia.

Although Greek Catholics expected support from the pope, the Vatican has avoided taking sides.

In a website interview just two days after the Havana meeting, the church's leader, Archbishop Sviatoslav Shevchuk of Kiev-Halych, Ukraine, said the document's "half-truth nature" had left many Ukrainians feeling "betrayed by the Vatican," and suspicious that Rome was "indirectly supporting Russian aggression."

Lonchyna thinks such reactions have been common, as many Ukrainians struggle to come to terms with Rome's latest "incomprehensible move."

"Vatican officials are still calling this conflict a civil war, when it's really a Russian war of aggression," the Greek Catholic bishop told NCR. "One can understand Pope Francis wants to show unconditional goodwill towards the Orthodox and demonstrate he's serious about restoring communion -- and it's obvious this requires some give and take. But it's equally clear this declaration was mostly written in Moscow."

So what's at stake -- and why are views so strongly divided?

While popes since Paul VI have enjoyed friendly ties with the ecumenical patriarch, who's recognized as spiritual head of Orthodoxy's nine patriarchates and 21 churches and archbishoprics, ties have been tense with the Russian church, which claims the spiritual loyalty of half the world's 250 million Orthodox Christians.

Following the collapse of communist rule in 1989-91, there was intermittent talk of a top-level summit under Pope John Paul II and Russian Patriarch Aleksi II. But this was prevented by Russian complaints that Catholics were "proselytizing" in traditionally Orthodox areas, which reached a head in 2002 when the Polish pope created four Catholic dioceses in Russia.

Contacts improved after the April 2005 election of Pope Benedict XVI, when an interchurch working group was set up. In August 2012, Polish Catholic and Russian Orthodox leaders pledged to "overcome mutual prejudices and misunderstandings." But the Moscow patriarchate still objected to the revival of Ukraine's previously outlawed Greek Catholic church, whose members are referred to contemptuously as "uniates" by Russian Orthodox leaders.

"Our meetings and pledges reflected a sincere wish for reconciliation -- but today's geopolitical situation, especially concerning Ukraine, has now created a real block," Poland's Catholic primate, Archbishop Wojciech Polak of Gniezno, told NCR. "Our role now, in this complex situation, will be to open the eyes of our Orthodox brethren to contemporary realities. Although we don't regret what we did, we're doubtful about going further."

Hence the consternation that greeted the Havana meeting and Vatican claims that it had been under preparation for a full two years.

Under communism, Catholics in Eastern Europe often complained that the Vatican was negotiating over the heads of local church leaders. Such fears have been stirred up again by Francis and Kirill's declaration.

The lengthy document deplored the "deep economic and humanitarian crisis" caused by the war in Ukraine, but said nothing about Russia's continued military backing for the bloody separatist campaigns in Donetsk and Luhansk, which have left more than 9,000 people dead and 20,000 injured, according to United Nations data.

As for Greek Catholics, the Cuba meeting took place a month before the 70th anniversary of their church's outlawing by a 1946 Soviet-engineered synod, which saw thousands of clergy and laity imprisoned and killed. Far from offering words of consolation, however, the declaration reiterates that "uniatism" cannot be viewed as "the way to re-establish unity," and calls on Greek Catholics to "live in peace with their neighbors."

It makes no mention of Catholic rights in Russia, which are still heavily restricted, or of the effective banning of Catholic worship in occupied eastern Ukraine. Instead, it pledges Catholic backing for the Russian church's claim to be Ukraine's only canonically valid Orthodox community, and calls on local Catholics to "contribute" to Orthodox unity.

Speaking in Rome Feb. 21, the pope said the encounter with his "dear brother Kirill" had long been wished for by his predecessors, and should be viewed as "a prophetic light of resurrection, which the world today needs more than ever."

But others are also worried.

Poland's Catholic church has traditionally been unwavering in its loyalty to Rome, and its leaders predictably put a welcoming spin on the Havana meeting. Polak, the primate, himself welcomed its "open atmosphere."

Behind the scenes, however, Polish church officials admit to misgivings.

With the Kremlin known to be dissatisfied at Kirill's loss of standing at home and abroad, they point out, Putin will have pressured the patriarch to agree to the meeting, hoping a perceived reconciliation with the pope will bolster Russia's image. As for Kirill, he'll have counted on the Havana encounter to strengthen his position at a major council of Orthodox leaders, convening in Crete, Greece, this June.

Media claims that the Havana meeting was the first "for a thousand years" were mistaken, since Russia's Orthodox patriarchate was only founded in the 16th century. Paul VI met the Istanbul-based ecumenical patriarch, Athenagoras I, during and after the 1962-65 Second Vatican Council, and agreed in 1965 to "erase from memory" the mutual excommunications imposed at the 1054 Great Schism.

By suggesting the Cuba meeting was unprecedented, however, the media reports bolster Kirill's claim to be the world's most senior Orthodox leader.

Marcin Przeciszewski, who heads the Polish church's Catholic Information Agency (KAI), thinks the Vatican drew on the earlier Polish-Russian church dialogue in preparing the Havana talks. But the Polish church "understands the situation much better" than Rome, Przeciszewski insists. It's also "less trustful" of Kirill, whose vigorous promotion of a new "Russki mir," or Russian world, in Eastern Europe has perfectly suited the imperial ambitions of Putin.

Although Poland's church also hopes eventually to renew dialogue with Russian Orthodox leaders, Przeciszewski says this can only happen in a convincing way when conditions "change for the better" and the Russian church becomes less submissive to the state.

"The Polish church, with its long experience, is more cautious than the Vatican's diplomats," Przeciszewski told NCR. "While Kirill's church remains an instrument of Russian power and supports policies which are endangering the peace of Europe, his credibility as a partner must remain in doubt."

Other aspects of the declaration have proved controversial as well, including its references to the "curtailment of the rights of Christians" by an "aggressive secularist ideology."

While the document urged international action to prevent the expulsion of Christians from the Middle East and lamented for the millions "left without a home or means of sustenance" in Syria, it made no mention of Russia's savage bombing campaign, which continued despite a ceasefire on the day of the Havana meeting.

It also noted that Catholic and Orthodox Christians shared "the same conception of the family," and deplored threats posed by cohabitation, same-sex unions, abortion, euthanasia and biomedical technology. But it avoided any reference to human rights and democracy, and avoided the theological and ecclesiological issues long dividing the churches, notably over papal primacy.

A version of this story appeared in the Mar 11-24, 2016 print issue under the headline: Pope's Russian outreach stirs anxieties.