Skip to main content
News
A version of this story appeared in the March 24-April 6, 2017 print issue under the headline: Autism program prepares students. 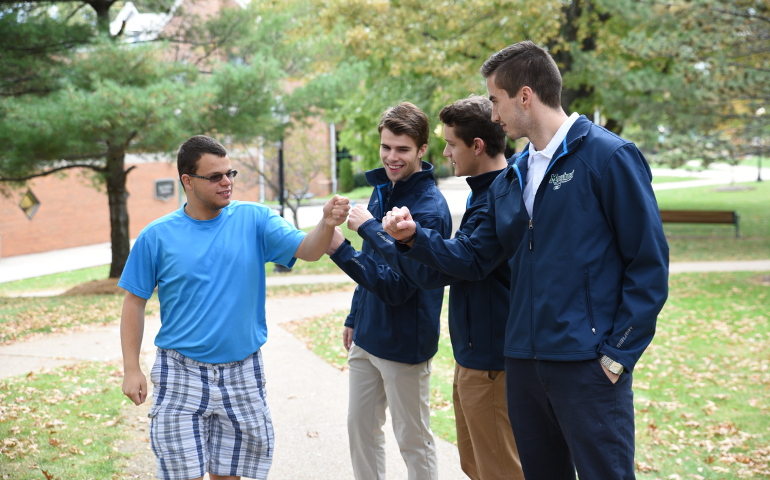 Marco Cicchino, left, an Autism Initiative at Mercyhurst student, greets three members of the Mercyhurst men’s ice hockey team, while walking on campus in 2016. The hockey players, left to right, are Tyler Enns and Jack Riley, both juniors at Mercyhurst, and Spencer Bacon, who graduated last year. (Mercyhurst University)

Bradley McGarry was standing outside the main building on the campus of Mercyhurst University here in late November when a student came hustling by looking serious and in a hurry.

McGarry called to him by name and said, “Hi, how are you?”

The student turned, looked him in the eye, responded, “Fine, how are you?”

That exchange, said McGarry, was a year and a half in the making.

The student was a participant in a six-year-old Autism Initiative that McGarry directs at the university. The program is still, like many of those enrolled in it, exploring the boundaries for people with autism spectrum disorder, an ever-widening designation for serious neurodevelopmental disorders. One of the effects of the disorder is difficulty communicating and engaging socially with others.

McGarry and this reporter had just left a meeting with five other students participating in the program. All were male, reflecting the fact that the vast majority of students on the spectrum are male. During the hourlong conversation, the confounding but not unusual mix of intellectual brilliance and social awkwardness was apparent. So, too, was the degree of success the program can achieve in the kind of behavior modification that can significantly diminish deficits in social interaction and assist those on the spectrum to engage in conversation on a range of academic and personal subjects.

One surprising element to this visitor was the level of self-awareness among some of the students and the ease with which most of them spoke of the layers of their lives — from an earlier point when, several said, they could not have imagined going to college, to their success as students and plans for the future.

If their speech was deliberate at times, it was also confident and direct. It didn’t take long for “the tennis match of conversation,” as McGarry describes it, to take hold. The students ranged from freshmen to seniors and, in some ways, demonstrated the steps in progress in social interaction that those years represent.