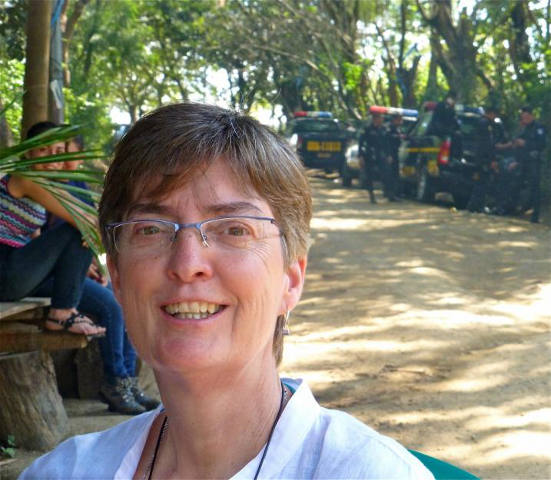 In rural Guatemala, a red double-cabin pickup rumbles past a sign painted on a crumbling adobe wall, Community in Resistance. The lonely road is so rough that passengers leave seat belts unbuckled to avoid bruises from the shoulder straps. When the truck emerges from a forest, a clutch of shelters appears as if imagined into being by a writer of magic realism. In the middle of nowhere, it seems, shacks cobbled from reclaimed wood and tents made of scraps of discarded billboard canvas line the road for a quarter of a mile, festooned with maps and posters including an image of Pope John Paul II and the Maya calendar round. The red pickup stops in sight of hand-painted signs tacked to walls: No to Mining. Transnational Companies, Get Off Our Land. Sr. Dani Brought, 57, jumps out dressed in blue jeans and a crisp white shirt, her quick, light figure blending easily with those of the young people who gather around.

“I’ve known her for 15 years,” says Celestino Morales, a farmer who is sitting nearby on a three-legged stool in the shade as Brought, known as Sr. Dani, greets young and old, handing out bottles of drinking water. “She has accompanied us. When we least expect it, there she is.”