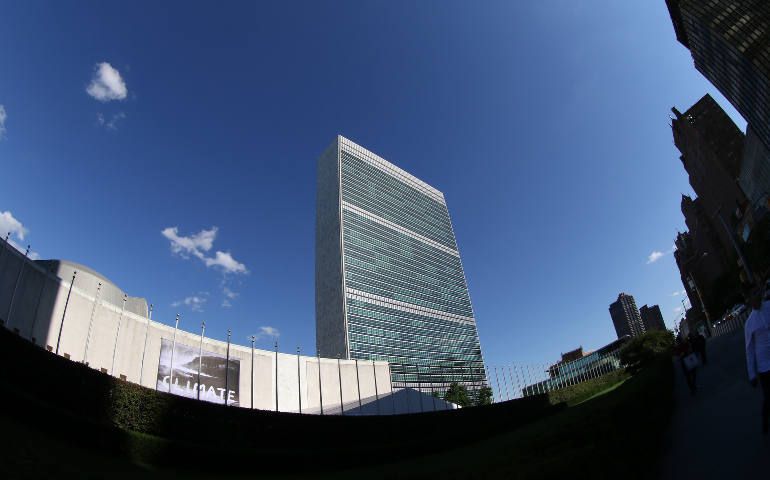 New York — style="line-height: 20.8px;">For women religious working within the United Nations, 2016 is shaping up as a year to press forward to achieve the hard-fought goals set out in 2015.

Last year was marked by vision and good intentions. The 193 U.N.-member states agreed to a new set of development goals to reduce poverty and protect the environment, and also shepherded a climate change agreement to help reduce the levels of global greenhouse emissions.

"I thought we ended the year on a high," said Sr. Jean Stoner, the sisters of Notre Dame de Namur's NGO representative at the United Nations. "It was an excellent year."

It certainly was a year that brought the Catholic church a lot of attention. Pope Francis' address on global poverty is still being talked about throughout the halls of the U.N. "He blew everybody out of the water," Stoner said in a recent interview with GSR, and she credits the pontiff for lifting up Catholic concepts like "the common good" at a critical moment.

With a new year under way, the U.N. system has its hands full. The U.N.'s refugee arm continues to coordinate global efforts to respond to the record number of displaced people in the world. The issue of migration deeply concerns the sisters at the U.N., though their advocacy work on the issue is not felt as directly as the issues pertaining to poverty because the U.N.'s refugee work -- the United Nations High Commissioner for Refugees -- is based in Geneva, and not New York, the U.N.'s headquarters.

There is certainly plenty to do in New York. The U.N. must now determine how best to implement the lofty goals of reducing poverty and creating a more environmentally sustainable world. It will do this with the help and prodding of the many advocacy groups -- such as dozens of religious congregations.