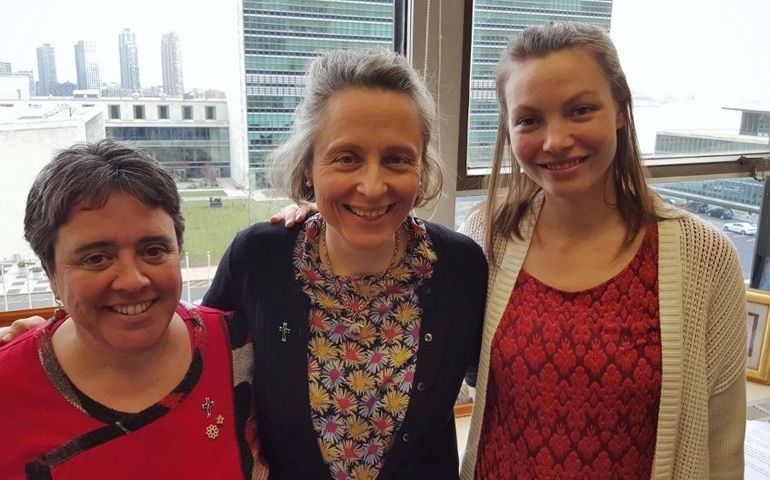 From left: Mercy Sr. Angela Reed, Sr. Áine O'Connor and Amanda Lyons, advocacy officer for Franciscans International, at the Mercy International Association office at the Church Center for the United Nations in New York. All three are involved in the work of the NGO Mining Working Group. (GSR/Chris Herlinger)

Global Sisters Report is focusing a special series on mining and extractive industries and the women religious who work to limit its damage and impact on the environment, health, and social issues. Pope Francis last year called for the entire mining sector to undergo "a radical paradigm change." Sisters are on the front lines to effect that change.

The quiet corridors of the Church Center for the United Nations, a 12-story building across from U.N. headquarters in New York City, are thousands of miles away from rock-strewn chasms and polluted waterways that characterize so many of the world's mining operations. But Sr. Áine O'Connor and her colleagues feel a connection with sisters and others working to help communities affected by companies seeking silver, gold, copper, coal, zinc and other commodities.

O'Connor and her colleagues who work at the United Nations see a multifront approach in tackling mining -- or extractive -- issues. As nongovernmental organizations acting in a "consultative status" with the U.N., their role is to bring pressure at the top, working with governments and companies to abide by international standards on environment, safety and health issues. They also want to raise the issue as an international concern, and there is no better place to do that than at the United Nations.

Amazon synod to take on land use, biodiversity, indigenous rights