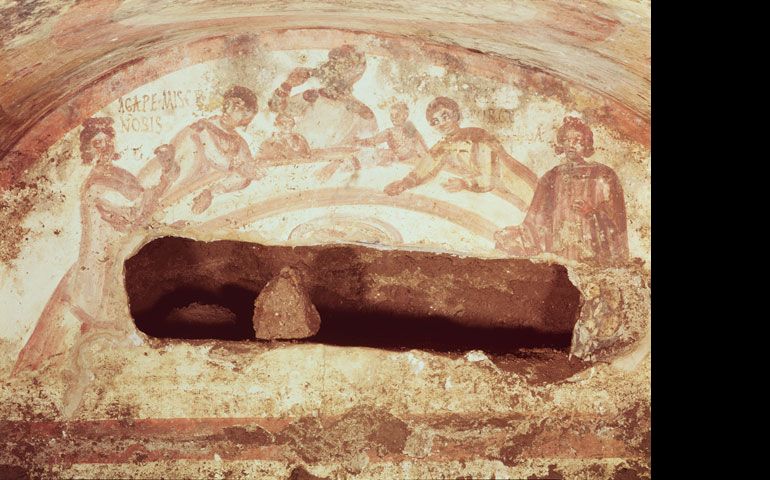 A eucharistic meal is depicted in a third-century mural in the Catacombs of Sts. Marcellinus and Peter in Rome. (Newscom/KG-images/André Held)

Back in the early 1960s, one of the games we North American College "old men" would play with new arrivals to the institution would be to take them to a couple of Rome's oldest churches and challenge them to find the original tabernacles. Usually, they didn't have any. If the church did, the tabernacles were located in a back pillar, or in a wall near the front door. As far as I can remember, in no church was it situated near the main altar, or in any place physically conducive to eucharistic adoration.

Of course, in the days before the Second Vatican Council, each of those ancient churches had a relatively modern tabernacle, either in the middle of the main altar or in a specially designated Blessed Sacrament chapel. But we learned from our guidebooks that they weren't part of the original structure.

This lack of tabernacles would be quite a shock to someone taught that what distinguished Catholic churches from Protestant churches was that "ours" always had a tabernacle containing the person of Jesus under the species of bread. "Theirs" was just a building with pews and an altar. (They didn't even have kneelers.)

Only when I began seriously studying the Christian Scriptures did I begin to understand the absence of tabernacles in those churches.

Shortly before his death, theologian Jesuit Fr. Karl Rahner shared his belief that early Christians presumed the risen Jesus was only present in the eucharistic bread and wine during the actual celebration of the Eucharist. When the Lord's Supper was over, Jesus was no longer there, except for the pieces or servings set aside for the sick or imprisoned. The original small receptacles in the churches' rear walls or pillars simply served as places to keep that leftover bread and wine until someone could carry it to those who couldn't come to the celebration.

Though no one denies that Jesus' original disciples believed they could surface him in the eucharistic bread and wine -- just glance at John 6 -- that doesn't seem to be where the action was taking place in the earliest Christian communities.

Churches should be willing, able to engage hard questions

And who is my neighbor?

Most Americans pray for healing