For Nuns and Nones' six-month pilot program, millennials move in 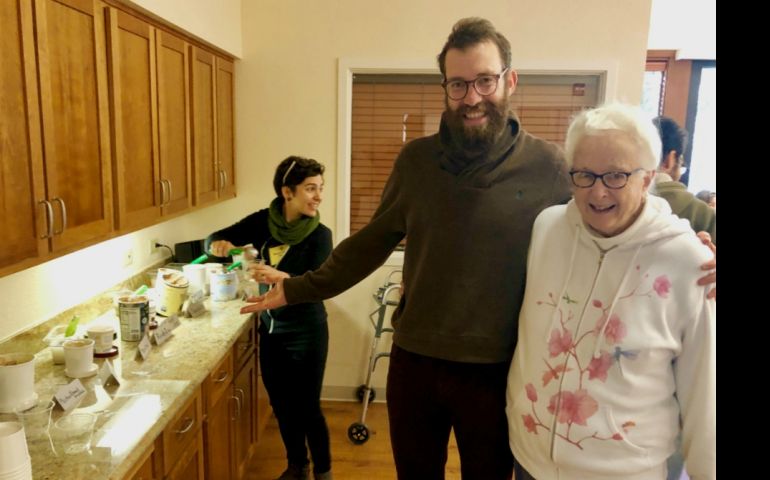 David Bronstein, a millennial participating in the Nuns and Nones residency program, with Mercy Sr. Marguerite Buchanan at an ice cream social at Mercy Center in Burlingame, California (Provided photo)

Burlingame, Calif. — The experiment was as eclectic as the items that filled the Mercy Center community room, where for six months Mercy sisters and spiritually curious millennials gathered and lived in this suburb south of San Francisco.

The mix of subjects on the room's bookshelf showcased the range of perspectives of the millennials: Books on new cosmology, anthropology and herbal medicine sat next to books on religious vows and the gift of community life. Jewish prayers hung next to mosaic prints of Catholic saints. Leaning against a wall was a whiteboard with a to-do list, including scheduling talks on composting and spiritual formation.

The grassroots movement known as Nuns and Nones had brought them together, initially through conference calls and in-person gatherings where sisters and millennial "nones" (referring to the box they check next to "religion") could share their passion for social justice, community life and contemplative practices. Within a couple years, Nuns and Nones has already engaged hundreds of sisters and millennials around the United States, with new groups sprouting in different cities every couple of months.

But in the Bay Area, four millennials in their early 30s became the first of the Nuns and Nones group to try out a residency program, temporarily living in a convent to witness and share in a spiritually grounded community life.

"Having so many books in the libraries around here as well as the teachers and sisters coming through created a place where you couldn't escape spiritual wisdom," said 31-year-old David Bronstein, one of the millennial residents.

"That deep spiritual hunger was constantly fed and empowered," he said.

Why is the church failing in the West?