Nuns on the Bus veterans keep the faith in tumultuous times 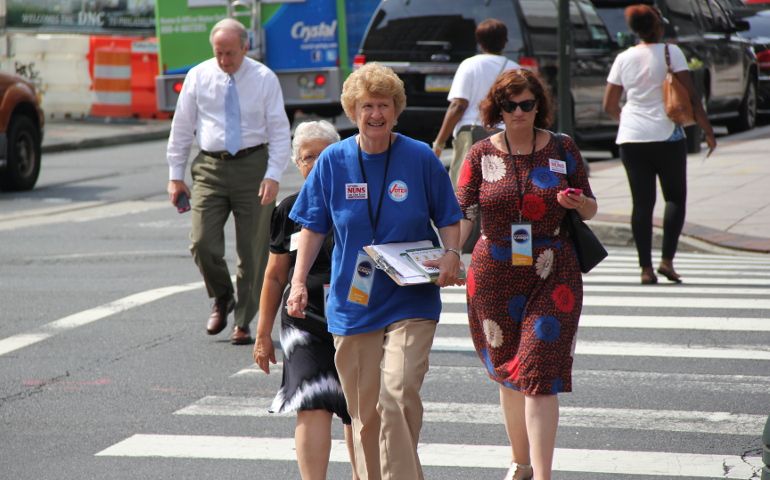 Sr. Richelle Friedman participates in the Nuns on the Bus Lemonade Ministry in Philadelphia during the 2016 Democratic National Convention. (Network)

Pray hard, and carry on.

In the face of political and cultural winds that often seem to be blowing against them amid the tumult of the Donald Trump presidency, participants in the most recent "Nuns on the Bus" cross-country odyssey have chosen prayer over panic.

"My approach is to be grounded in a spiritual foundation. That's what sisters do best," says Sr. Susan Rose Francois, who serves on the leadership team of the Sisters of St. Joseph of Peace.

As they reflect on the voices of the immigrants, young people, homeless people, and families they met on the 2016 tour, sisters are pitting hope against fear, calling upon the Holy Spirit to change the hearts of politicians, and promoting the positive when many appear to be on the edge of a meltdown. (An American Psychological Association survey last week suggested that two-thirds of Americans are significantly stressed when they ponder the country's future, with more than half saying that this is the lowest point in U.S. history they can remember.)

The 13-state, 24-city "Mend the Gaps" journey through the Midwest and the Northeast included stops at both the Republican and Democratic conventions as well as in cities and small towns along the way. (Former GSR staff member Jan Cebula, a Sister of St. Francis in Clinton, Iowa, blogged about it.) It was the fifth such trip since 2012 and the most recent. A future Nuns on the Bus tour has not been announced.

If the sisters, in their advocacy for immigrants, health care as a human right and reducing economic disparities, measured success by bills passed and policies changed, their calculus would indeed be bleak.

But their comments suggest that doesn't seem to be the case.

As director of public policy at the D.C.-based Coalition on Human Needs, Richelle Friedman, a Sister of the Presentation of the Blessed Virgin Mary, says one-on-one encounters with families on the trip deepened her passion to advocate on their behalf. "Often the stories are sad and heart-wrenching. But I can't give up. The people who are struggling aren't giving up."

| Nuns on the Bus veterans keep the faith in tumultuous times