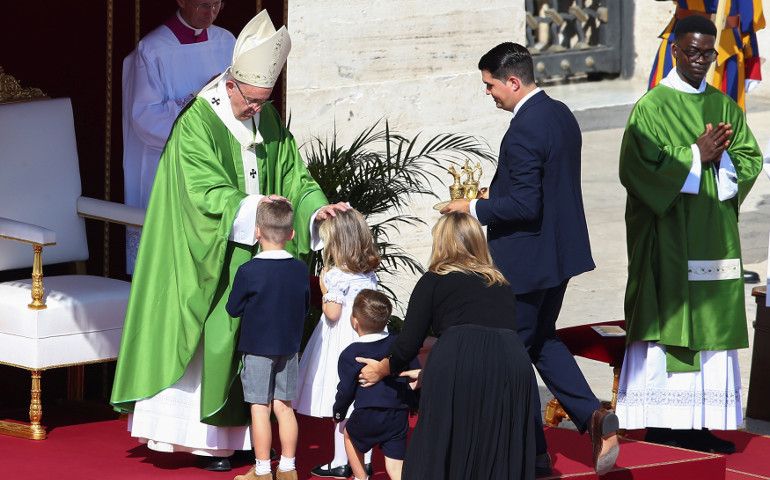 Pope Francis blesses a family as he celebrates a Mass for the Jubilee for Catechists Sept. 25, 2016, in St. Peter’s Square at the Vatican. (CNS/Reuters/Alessandro Bianchi)

While bishops and theologians rattle rhetorical sabers on issues such as gay rights and second marriages for Catholic couples, Catholics across the country in parish discussion groups about Pope Francis’ apostolic exhortation on the family see it differently. They look at Amoris Laetitia as a way to get to know the man they see on television, to discover what he’s thinking beyond the media spin.

And they generally like what they read and hear, if the returns from two parishes on both the East and West Coasts are any indication.

Those two parishes discovered that Francis is pastorally minded, confirmed in church doctrine yet willing to address the concerns about family life in stressed times. He argues for the wisdom of church teachings on family and sexuality, yet with sensitivity for those who, for whatever reason, fall short. Armed with study guides, including one by NCR senior analyst Jesuit Fr. Thomas Reese, they pored through the chapters and answered questions raised by the document.

Laura Trovato, a member of Holy Family Church in San Jose, Calif., told NCR that she has been involved in ministry to the divorced and remarried for the past 30 years. She found a kindred soul in the pages of Amoris Laetitia, a man who consulted widely before writing the document and who drew upon decades as a pastor in his native Argentina, learning there are no perfect marriages or family situations.

Catholic priest with a taste for 'self-bondage' returned to ministry