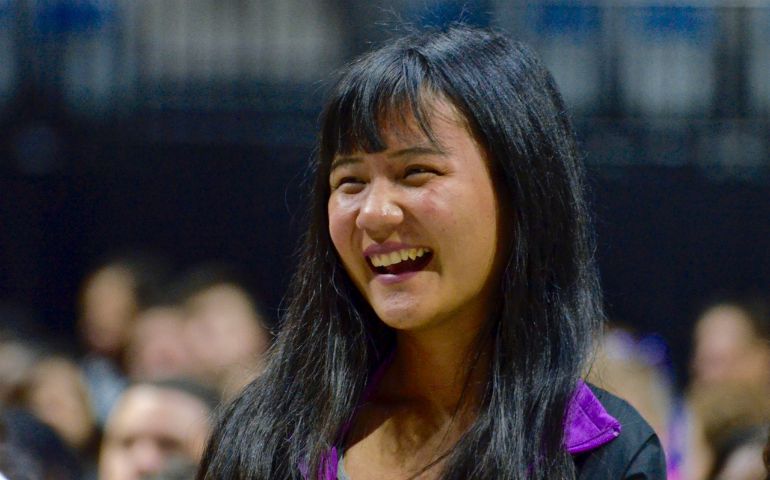 Niang En Chin laughs during graduation practice June 8. Her family came to the United States as refugees from Burma, now known as Myanmar, and she graduated in the Top Ten in her class at North Side High School in Fort Wayne, Indiana. (GSR photo/Dan Stockman)

Editor's note: Global Sisters Report is bringing a sharper focus to the plight of refugees through this special series, Seeking Refuge, which follows the journeys refugees make. For more GSR coverage on migration around the world, click here.

Niang En Chin was in second grade when her family fled their home in Myanmar.

Niang's family is from the ethnic Chin minority, which is persecuted in Myanmar. Most Chin are Christian, having converted under British colonial rule, and suffer at the hands of the military regime ruling the country, which prefers the Buddhist majority.

Niang, now 18, has thrived in Fort Wayne, Indiana, where her family was settled in 2010. She graduated as one of the top 10 students in her class at North Side High School in June and plans to attend Indiana University in the fall, her first step in her plan to become a doctor.

Niang never wants to forget her roots, she said, but what she remembers most about Myanmar is fear: fear of starving, fear of not being able to get an education, fear of the police.

Now, Niang and her Burmese high school friends have a different concern: Losing their language and culture as they try to integrate and succeed in a new society. Niang can speak her native Burmese language and can read a little bit of it, but she cannot write in it.