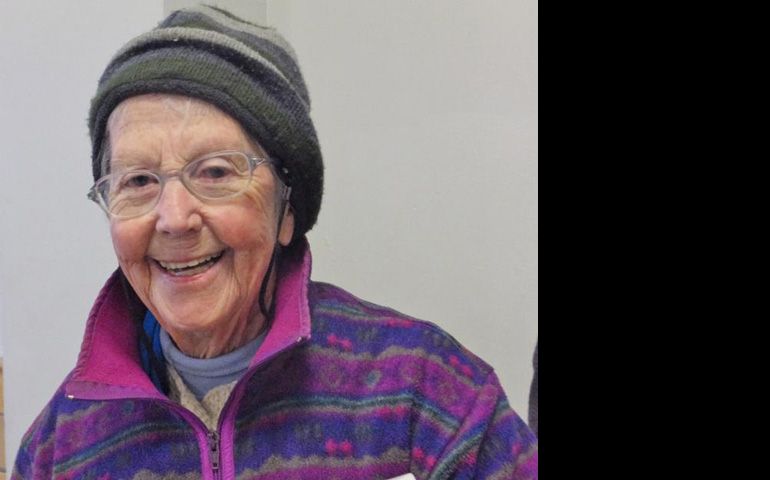 Sr. Megan Rice is ready to do her weekly vigil in front of the White House. She lives with other Holy Child Jesus sisters in Washington, D.C. (GSR/Patricia Lefevere)

Bloomfield, New Jersey — If a prize is ever presented for "protestor prodigy," Sr. Megan Rice may well be in the running. The Holy Child Jesus sister, now 85, has been arrested almost 40 times and has spent some three years in jail in her quest to rid the world of nuclear weapons.

One might think she's been doing this all her life, but most of her activism and subsequent arrests came after she'd spent 33 years teaching science and running schools in Nigeria and Ghana. In the late 1980s and 1990s she returned to the United States twice from Africa to help move and care for her mother, Madeleine Newman Hooke Rice. She even took her along on a few protests while back in the States on leave.

Why has Rice trespassed at the nuclear test site in the Nevada desert? Why has she served two six-month prison terms for protests outside the gates of Ft. Benning, Georgia, with the SOA Watch? Why did she break into the government's premier nuclear storage facility in Oak Ridge, Tennessee?

"Being an anti-nuclear activist satisfied my need to do what is just common sense," Rice told GSR in an extended interview in mid-November, when the nun addressed some 150 members and supporters of New Jersey Peace Action. She challenged them to take on the disarmament task now that she's been released from a three-year jail term after serving two years. She pointed to international laws that ban the development of weapons of mass destruction, repeating "it's just common sense."

Catholics must act on Francis' mandate to abolish nuclear weapons