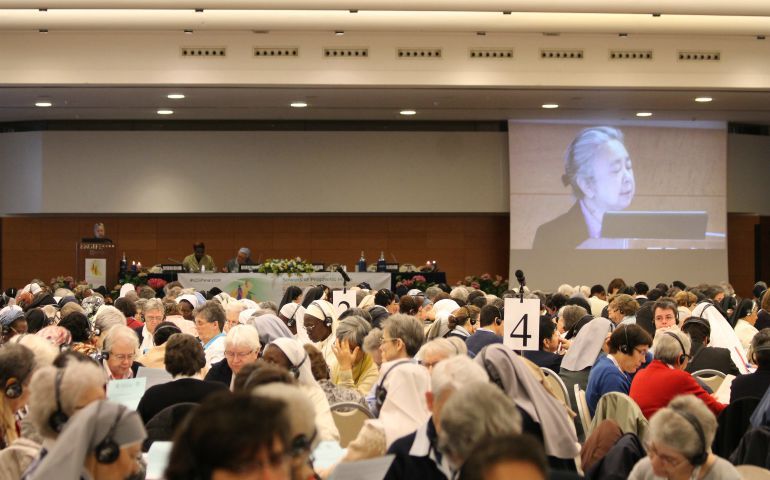 About 850 superiors general of women religious congregations gather May 7 as part of the triennial International Union of Superiors General's plenary assembly, held May 6-10 in Rome. (Courtesy of UISG)

Rome — Catholic sisters have a unique opportunity and responsibility to lead efforts to curb climate change and environmental degradation as individuals, communities and a network of congregations worldwide, Franciscan Sr. Sheila Kinsey told about 850 superiors general of women religious congregations gathered May 7 in Rome during the second day of the International Union of Superiors General's plenary assembly.

Kinsey outlined steps taken since June 2018, when UISG launched the campaign Sowing Hope for the Planet to share environmental practices many communities have adopted for decades and efforts of women religious who are putting Pope Francis' encyclical Laudato Si' into practice.

"As international congregations, we need to look at the ways we have been guilty of environmental destruction and disregard for these consequences to one another and especially to the poor," said Kinsey, who serves executive co-secretary of the Justice, Peace and Integrity of Creation Commission (JPIC), a joint project of UISG and the Union of Superior Generals, the umbrella group of the world's men religious.

Sisters live and minister both in countries where lifestyle contributes to the rise in temperatures and in regions where climate change has the strongest effects.

"Our communities are both intimate with the cause and effect," she said. "With our personal commitment to one another, we are ideally positioned to respond compassionately in an integrated effort."

The presentation was among the sessions under the overall theme Sowers of Prophetic Hope for the triennial UISG assembly, which gathered leaders of congregations from 80 countries representing more than 450,000 women religious around the world.

If COVID-19 frightens you, you should be terrified by climate change