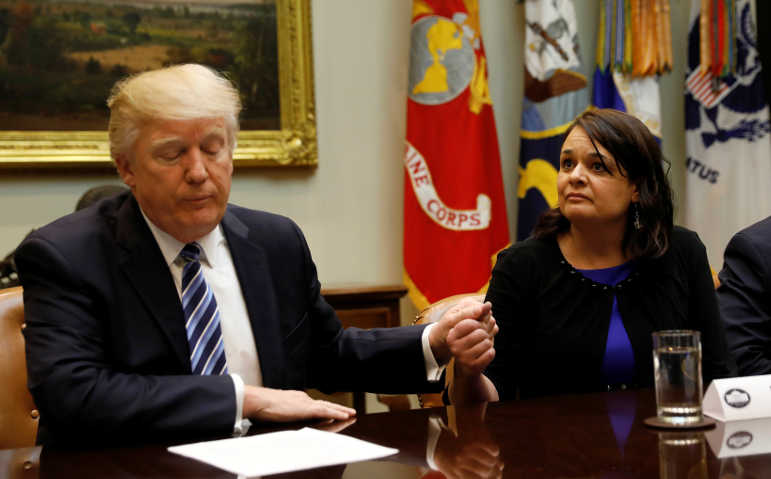 U.S. President Donald Trump clasps hands with Carrie Couey of Colorado during a meeting about healthcare at the White House March 13, 2017. (Reuters/Kevin Lamarque)

Earlier story: If the Republicans' plan to dismantle most of Obamacare is approved later this month by the U.S. House of Representatives, where it cleared initial hurdles last week, it would go next to the Senate, where its fate is uncertain.

At least nine Republican senators have expressed concerns about the plan, which is moving forward in the House without a clear assessment of its impact on the federal budget or how it would impact the level of health insurance among Americans.

The plan would roll back much of former Democratic President Barack Obama's 2010 Affordable Care Act, retain some parts of it and substitute other new parts. Democrats say it goes too far. Some Republican conservatives say it doesn't go far enough.

Republicans dominate the House, but have only 52 seats in the 100-seat Senate. Supporters of the Republican plan would need only a simple majority to pass it, under current plans.

Here are some Republican senators who have raised questions about the House plan, or outright opposed it:

Senator Rand Paul of Kentucky: He has called the plan "Obamacare Lite," saying it stops short of full repeal. He has reintroduced a bill to repeal Obamacare that was approved by Republicans a little over a year ago, but was vetoed by Obama.

Senator Ted Cruz of Texas: Cruz reportedly said on March 8 that he had "significant concerns" about the plan and that it could pass the Senate in its current form. But he added he would work hard to improve it. That night, he and his family dined at the White House with Republican President Donald Trump, who has expressed support for the House plan.

Senator Mike Lee of Utah: He said on March 7 the plan was a "step in the wrong direction" and expressed concern that it was not known how much it would cost and whether it would make health care more affordable.

Senator Tom Cotton of Arkansas: On March 9 he urged the House to pull back, saying the plan could not pass the Senate without changes.

Senator Susan Collins of Maine: She has concerns about the House bill. She voted against repealing Obamacare a little over a year ago because it would have taken federal funds from women's healthcare provider Planned Parenthood, which also provides abortion services. The current House bill would strip funds from Planned Parenthood.

Senator Rob Portman of Ohio: He and three other senators raised concerns in a letter last week about a Feb. 10 draft of the House plan, saying they wanted to be sure it will protect people enrolled in Obamacare's Medicaid expansion.

Senator Cory Gardner of Colorado: He signed the letter of concern about the plan. In a March 9 telephone town hall, Gardner reportedly did not say whether the current House bill met his standards on Medicaid.

Senator Lisa Murkowski of Alaska: She also signed the letter of concern about the plan's effect on Medicaid.

Senator Shelley Moore Capito of West Virginia: She, too, signed the letter of concern about the Medicaid impact.