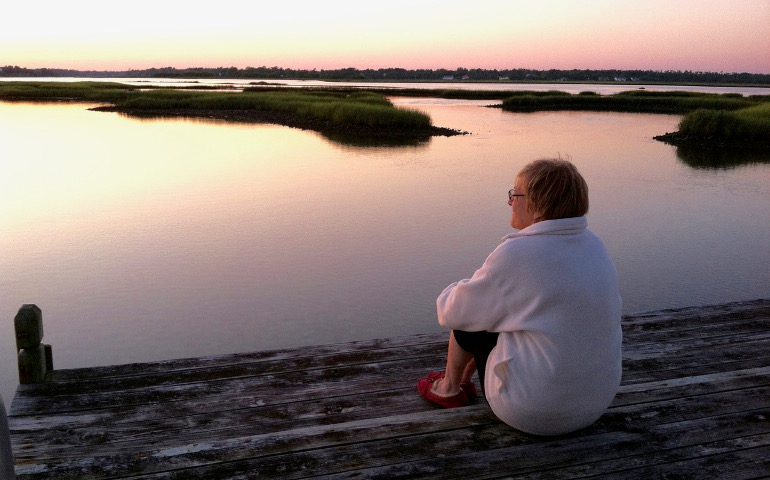 A visitor watches the sunset from the dock overlooking the expansive wetlands near Innisfree House.

Sacred spaces come in all shapes and sizes. I just wasn’t expecting a beach house to be one. Indeed, it is, made sacred by the friends and family of the owners who have been using it for decades. Their stories, kept methodically in a logbook, tell of new forms of spiritual nurture, new ways of being connected. It is almost as if the words of Laudato Si’ find physical expression. The land, water, wildlife and intentional silence combine to refresh spirits and reignite energies.

The tall, gray house is on a barrier island off the coast of North Carolina. Large windows and white walls and carpet make a lovely canvas for nature to appear. Out one door is a long private dock that ends in a gazebo on the Intracoastal Waterway. Out another door and down half a block is the Atlantic Ocean. The views are stunning, especially the sunsets seen from the deck off a large upstairs bedroom. I know, it sounds like a real hardship post! And it could just be another expensive rental. Instead, it is a touchstone for generations meant for retreat and renewal.

The owners, really the animators, are the souls of goodness, the heart of the place. He was a priest and she was a nun who kept their Gospel values but moved from religious and clerical life to a broader sense of community. They married more than 37 years ago, went on to successful careers in psychology and real estate respectively, and had the house built in 1992.

She writes, “It was built with the idea that anyone could withdraw into their rooms for wanted and accepted alone time, refresh with community in the Great Room. I insisted we not clutter the place but let nature speak loudly, primarily and gently with the quiet.”

So, it is. He added a kayak for splendid solitary glides along the egrets’ way in the broad salty marsh. The house is an investment, not a business deal, but an investment in Earth and its stewards. The couple, along with Pope Francis and his namesake, knows how “inseparable the bond is between concern for nature, justice for the poor, commitment to society, and interior peace,” as the pope wrote in “Laudato Si’, on Care for Our Common Home.”

I will arise and go now,
and go to Innisfree,

And a small cabin build
there, of clay and
wattles made;

Nine bean-rows will I
have there, a hive for the honeybee,

And live alone in the
bee-loud glade.

People, beginning with the owners, hallow the place. The four-volume guest book reads like a novel. A thoughtful early guest started the tradition, opening the story with a report of how things were shipshape on his watch. The owners chime in on their visits, chronicling holidays with family, times of rest and retreat, worries about threatening storms, the good times and the challenges. Whole families sign the book, telling of their beach adventures, golf outings, memorable meals and new babies.

Everyone says how beautiful the place is, and how grateful they are to be there. Everyone, even when it rains.

Over the years, many of the same people keep coming back. The mother of one owner signs in again and again simply stating her love. She stops coming after a while, but her descendants remember her with flowers. The man who wrote the first entry eventually passes on, but he, too, is still very present when his family gathers for their annual stay. Early guests who came as children now write their own entries. The insistence on beauty and gratitude is repeated and repeated. Yeats again:

And I shall have some

Dropping from the veils
of the morning to
where the cricket
sings;

There midnight’s all a
glimmer, and noon a
purple glow,

And evening full of the
linnet’s wing.

That is what whole families feel.

I learned from the book that my first visit was in 1994. My partner and I were utterly charmed by the place. Our story, written five more times over the intervening years, has its own pattern. We arrive exhausted from a busy year, sleep endlessly and luxuriate in the quiet. Swimming and walking, boat rides and leisurely meals, more sleep, and good books make a week at this retreat house pure tonic. We leave refreshed yet perplexed as to why we don’t go more often.

Eventually our daughter joined us, so we went as a family. She was smitten with the place like so many children before her. She has added an obligatory trip to the local turtle hospital to our routine. We visit the rescued patients, marvel at the care they receive and rejoice when some go back to the sea again. How easily the corporal works of mercy become part of family life, even on vacation!

Another young girl who treasured her annual family time at Innisfree feared that some renovations in 2013 would change the place forever. Alas, she thought she would never recognize it again; her childhood favorite place would be gone.

To her deep teenage relief, the structural reinforcements were accomplished without any visible change to the place that so many cherish. Such is the emotion connected to holy places that one never wants to change.

The rituals of the house don’t change much either. Turning off the water main, making sure the windows are locked against storms, washing linens for the next guests, cleaning out the refrigerator, and remembering to leave the garage door opener on the desk are all part of the rhythms of life here. We do them religiously at this house.

This shared space, made available so generously, reminds me of the religious houses where people went “home” for annual retreats, times out of time to regroup and renew. Here, that happens over generations. People get sick and die; babies arrive for their first visits; ancestors are remembered with flowers strewn at the end of the dock. Whole families hold this place in their collective memories as the locus of so much goodness.

Many of us who visit do not know one another, but we know the goodness.

Quite by chance this summer, we ran into a family that had stayed in the house while their own neighboring place was being built. We spoke warmly of the Innisfree owners and figured out that we would-be strangers had all been at the couple’s 25th wedding anniversary celebration. I felt we were kindred spirits. Such is the power of a sacred place to link and join.

I work for a world where more such sacred places are available to everyone. I am now on the lookout for similar ones that nourish people, hoping others who have such places to share will follow my friends’ lead. Even the guest spaces in our own homes can be mini versions if we attend to them with eco-care. Because of this treasured beach spot, and with help from Yeats, I know what I am looking for.

I will arise and go now, for

I hear lake water lapping
with low sounds by the shore;

While I stand on the roadway,
or on the pavements grey,

I hear it in the deep heart’s core.

[Mary E. Hunt is a feminist theologian who is co-founder and co-director of the Women’s Alliance for Theology, Ethics and Ritual (WATER) in Silver Spring, Maryland.]