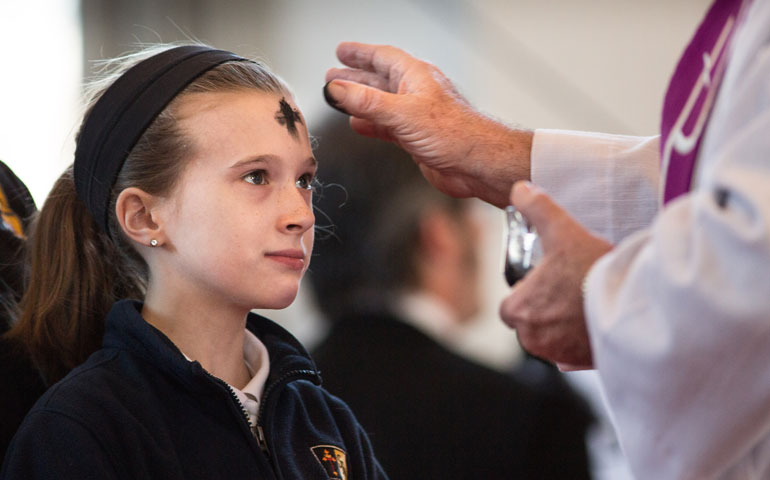 As a cradle Catholic, I have long talked about the mixed messages inherent in many of the sacraments and holidays, at least to my small mind during my formative years.

Ash Wednesday is a prime example of a day that was filled with equal parts mysticism, theater and a little horror thrown in for good measure.

When I reached the age of knowing -- the ripe old age of 7, according to the nuns at St. Euphrasia Elementary School -- I received a bunch of religious high fives: my first confession, first Communion, and eligibility to go up and have Fr. Kelly smudge a sooty cross onto my forehead on Ash Wednesday.

This was heady stuff for a second-grader, but as with most of the rites to which we were being introduced, it could be a little mind-boggling.

For example, in second grade, we had to come to school early on Tuesdays and Thursdays, so we could go to confession before morning Mass. Now Tuesdays were easy, because I had had the whole weekend to sin, and when I knelt down in that dark little closet, I proudly unfolded my mental list.

"Bless me, Father, I have sinned. It has been since this past Thursday since my last confession."

I would regale the (I assumed) wildly shocked priest behind the sliding screen with my litany of wrongdoing: "I punched my brother Tim in the stomach. I blamed the missing cookie from the wax paper of new cookies on my brother Joe. I lied to my mother about who stole that cookie (a double whammy sin, thank you very much)." Weekends were rife with naughty stuff. I was golden.

But on Thursdays, I had only had two days since my last confession. This was a dilemma. These were school days, mind you, in which I woke up, got dressed, ate breakfast, assembled our sack lunches, helped my brother Tim tie his shoes and amass his stuff into his bookbag, rode our bikes across town to school, spent the day in class, rode our bikes home, did our homework, had some dinner, took our baths, got into our PJs, read some books, said our prayers and went to bed.

Candidly, when you are 7 and this busy, there are simply not enough hours in the day to find opportunities for mortal sin.

So, on Thursday mornings, I would plod head-down into the confessional, kneel, say the rote introduction, and lie.

"I kicked our dog Sparky across the yard."

Now, I hadn't done any of these things -- if I had, I would not have been able to walk after the bottom-paddling I would have received from my fierce mother -- but I obtained the desired result. The priest would sigh deeply on his side of the screen (certainly mortified by the status of my deeply tormented and dangerous soul), whisper huskily, "Say three Hail Marys and three Our Fathers," and then snap shut the sliding window with obvious disgust.

Ha ha! Victory. Lying in the confessional had the extra added bonus of giving me my first sin to express on the following Tuesday. Bam.

It didn't occur to me until much later that maybe Fr. Kelly had me figured out. Certainly, my leadoff sin every Tuesday could have given him a clue. Perhaps his sighs behind the screen were less about concern for my damaged soul and more about trying to stifle his giggles.

In any case, my answer to that moral dilemma -- to fabricate sins instead of just admitting that, hey, I am 7, how many shenanigans am I expected to get into in two school days? -- is similar to my confusion about Ash Wednesday.

We were told that Jesus went into the desert, to fast and pray, and was tempted by Satan for 40 days, and that Lent is a mirror of that.

To show the seriousness of our penitence, for our fasting, we are supposed to give up something -- the year I was 7, it was Fritos. Anyone who knows me understands that my giving up Fritos should have scored me points toward sainthood. Fritos are my kryptonite. Most of my friends gave up candy. Amateurs.

The irony is that after the six weeks of Lenten fasting are over, we all wake up on Easter morning with clean-scrubbed little souls, and discover that the Easter Bunny left us baskets full of jelly beans and chocolate eggs and hollow rabbits and malted milk balls.

The logic of how the celebration of Jesus' resurrection equated to a basketful of plastic green grass strewn with treats was pretty elusive to my 7-year-old self. But who says no to malted milk balls?

But there was something that was both downright holy and spooky about that moment on Ash Wednesday when Fr. Kelly smeared the cross onto my forehead, saying either "Repent, and believe in the Gospel" or "Remember that you are dust, and to dust you shall return."

I felt positively medieval as I returned to class, then rode my bike home, with this very public sign of my sins and mortality emblazoned over my eyebrows.

Like wearing the scarlet A, there was no hiding the fact that I was a little Catholic sinner. No number of Hail Marys or Our Fathers could shield me on that long bike ride home.

I felt out there, just like Jesus wandering the desert, with Satan lurking behind every rock. As my chunky legs pumped the pedals, I whispered the long prayer we had been taught by the nuns, for the moment when (not if) we turned the corner and encountered Satan: "Heavenly Father, allow your Son Jesus to come now with the Holy Spirit, the Blessed Virgin Mary, the holy angels and the saints to protect me from all harm and to keep all evil spirits from taking revenge on me in any way."

Over and over, until my brother Tim and I skidded our bikes into our driveway.

I am happy to report that the prayer worked just as the nuns promised it would. Satan didn't bother us. The combination of the ashy cross on my forehead and my obsessive prayer had blazed a path of safety for our bicycles and our vulnerable young souls.

But even as I exhaled with relief, I also remember feeling a wash of goosebumps. The realization of evil, of the devil right around every corner, was very scary.

I was taught that during his own 40 days of Lent, Jesus grappled with Satan and ultimately won. And the nuns explained that since Jesus died for our sins, then rose to defeat death, we too were saved.

But if Satan was conquered by Jesus' death and resurrection, and we were truly and eternally safe, why did we have to go to confession twice a week to lay out our sins? And what was the need for protective prayers and ashen crosses if the battle was behind us?

I found no answers in the sky on that dusky spring afternoon. Only the tickling fear that somehow my little soul must still need these rituals for my protection. And the straight out hope that they would always work.

A version of this story appeared in the Jan 29-Feb 11, 2016 print issue under the headline: Satan lurking behind every rock.