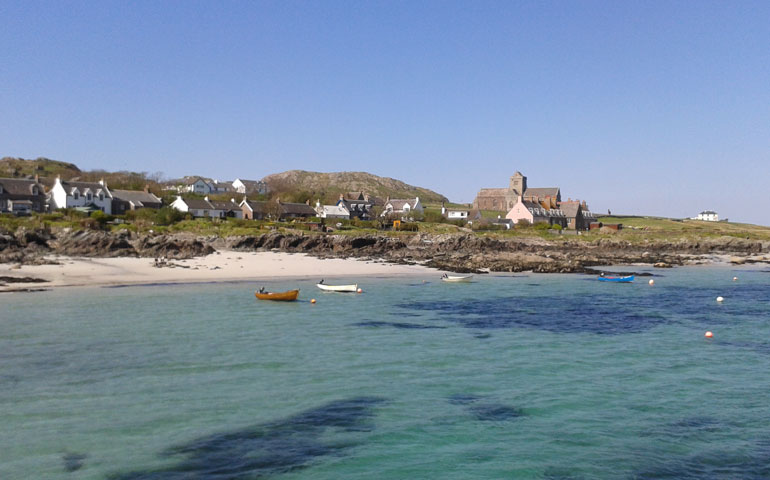 On the windy promenade of this western Scottish port, the gray stone façade of a modern cathedral gazes out over a choppy autumnal seascape of distant islands, edged by anchored ships and rocky promontories.

When Brian McGee moved here last February to become the ninth Catholic bishop of Argyll and the Isles, he was struck by the stunning vistas all around him. Since then, he's journeyed constantly from his base at St. Columba's Cathedral to remote, far-flung parishes, developing ideas for making his diocese a hub for pilgrims and spiritual seekers.

"Catholics are spread very widely here -- and whereas the sea was once seen as a thoroughfare for getting around, it's now a physical barrier," McGee told NCR. "But it still links us to the people who came before, whose faith we still celebrate, while the natural beauty it highlights can help us reconnect with God in ways which modern urban life often makes difficult."

Scotland's Catholic church dates its existence from a mission by St. Ninian in A.D. 397, and has traditionally been strong in the Western Isles, whose main ferry port, Oban, was the obvious choice for a new Catholic see when the church was refounded in the 19th century.

With just 30 clergy, the diocese includes 144 islands spread over 12,000 square miles. It's considered one of Europe's most scenic areas, as well as one of its least inhabited, with just 10,500 Catholics making up 14 percent of the total population.

Even in the church, there are cultural differences between the firmly rooted parishes of Lochaber and the Outer Hebrides, and the more marginalized communities of traditionally Protestant Argyll and Bute.

McGee's diocese carries prayers and messages in English and Gaelic on its website, as well as stories of its holy patrons -- from the Irish St. Columba, who set up the first monastery in 563 on the tiny island of Iona, to the Australian St. Mary MacKillop (1842-1909), whose Scottish family originated near Inverness.

"St. Columba's great gift was in the hospitality he offered everyone, and having only recently re-established a Catholic presence here, we're trying to continue this today," explained Sacred Heart Sr. Jean Lawson, who runs the Catholic House of Prayer on Cnoc a' Chalmain, or Hill of the Dove, on Iona.

"It's a lively time to be a Catholic here now, and it helps to know something about the church's history," she said. "But there's also a deep tranquility here, even when the winds are strong and the rains heavy -- a sense of being close to heaven, which frees you to pray and reflect."

If the diocese is based administratively on Oban, its spiritual heart is on Iona, where the community founded by St. Columba (521-597) still lives on. The monastery endured Dark Age Viking raids, during which its valuables were plundered, its monks slaughtered, and its unique calfskin illuminated Gospels, the Book of Kells, spirited away to Ireland for safe-keeping.

But the monastery survived as a center of learning and spirituality, and helped spread the Christian faith to the rest of Britain. Benedictine monks and Augustinian nuns settled here around 1200, while heads of Scotland's clans -- MacKinnons, Macleans and MacLeods -- were buried in the cemetery adjoining Iona's St. Oran chapel. So, by tradition, were kings, including Kenneth MacAlpin (810-858), who unified Scotland's warring Pictish tribesmen, and the "Red King" MacBeth, made infamous by William Shakespeare five centuries after his death in 1057.

When Protestantism was imposed on Scotland during the 16th-century Reformation, Iona fell derelict and the Catholic church came close to being eradicated. Some Catholic communities survived, largely thanks to their very remoteness, while traditional pilgrim links with Ireland kept local devotions strong.

But it took till the late 19th century for a Catholic church hierarchy to be re-established in Scotland, and the often brutal Reformation events have left their legacy in clearly defined island loyalties.

Whereas Lewis and Harris in the Outer Hebrides are dominated by Calvinist or Presbyterian "free churches," which still strictly observe the Sabbath, Barra and South Uist are overwhelmingly Catholic and home to traditional observances. So are predominantly Catholic Eriskay and Vatersay, while Benbecula is evenly divided between Catholics and Protestants.

When the Catholic "Young Pretender," Charles Edward Stuart, or Bonnie Prince Charlie, fled to the Western Isles in 1746 after seeing his rebel Jacobite army crushed at the Battle of Culloden, he had to make sure he landed on sympathetic shores. The islands were flooded with British troops, and at least 15 Catholic priests were executed or imprisoned for involvement in the uprising, mainly due to their clan connections.

One who escaped was Bishop Hugh MacDonald (1699-1773), apostolic vicar of the Highlands, who, though doubtful about Bonnie Prince Charlie's cause, had blessed the Jacobite standard at Glenfinnan and fled to France after hiding out in the forests after Culloden. But the involvement of clergy fueled British government suspicions that the Catholic church was complicit in conspiracy, suspicions that led to decades of discrimination.

"The combination of a dramatic past and natural serenity has shaped the church's character here," she told NCR. "The fact that you have to cross the sea to get to much of the diocese creates the feeling you're on a pilgrimage, which is enhanced further by the church's ancient Irish roots and connections."

Peter Kearney, director of the Scottish church's media office, agrees. As a native of Catholic Barra, he thinks the Western Isles have their own distinctive spirituality. And though there's still some uneasiness between Catholics and Protestants, attitudes have clearly softened.

"Things which are no longer seen in the rest of Britain, such as wayside shrines and statues of the Virgin Mary, are still common here," Kearney explained to NCR. "Those seeking to get rid of these expressions of Catholic piety faced obvious difficulties getting to inaccessible areas like this. This is why these Catholic traditions remain so strong."

Catholics like Leydon and Kearney have been caught up in recent political dramas in Scotland, where citizens narrowly voted not to press ahead with national independence in a September 2014 referendum, but could well be called on to vote again following Britain's June decision to quit the European Union.

The majority of Scots favored staying in the EU, accentuating their sense of separateness, and the effect has been to bring members of all churches together in a process of national reflection.

Professor Mark Elliott, who heads up theology at Scotland's oldest university, St. Andrews, believes the governing Scottish National Party has consciously tapped into the romantic spirit of the Western Isles with its decadeslong drive for independence.

He also thinks the Catholic faith could prove a natural ally.

"Catholic ritual recalls an invisible, supernatural reality -- of saints and angels, souls and spirits -- which naturally suits areas like this, with the vivid sense of place offered by seas, skies and mountains," Elliott told NCR. "The Protestant tradition, by contrast, embraces a simpler, plainer view of the world, emphasizing discipline, labor and courage. It's less interested in the imaginative possibilities offered by the mysteries of nature, and it's in this sense that Catholicism may well have the brightest future here."

That vision of a landscape that stays the same but also constantly changes -- bringing tranquility and hardship, an appreciation of nature and a battle with the elements -- is what inspires McGee from his base at Oban's windswept St. Columba's Cathedral, where Gaelic-speaking Catholics gather for morning Mass close to the stormy waters of the North Atlantic.

Born at Greenock to Irish parents 51 years ago, McGee won't be drawn on independence. But he agrees it's an exciting time to be Catholic in Scotland, particularly now that interchurch ties are generally better. He hopes to build up his church's school network, especially on Catholic islands like Barra and South Uist, and to use the life-affirming beauty and traditions of the Western Isles to bring people back to the faith.

But he also hopes to develop the region's potential as a spiritual refuge, where people overwhelmed by the speed and complexity of modern life can reconsider their priorities and draw closer to God.

"Things have changed at lot here and I don't see any major difficulties facing Catholics today -- while we want to get away from history's negative aspects, we also want to keep it for its richness," McGee told NCR. "I think people who come here can easily feel a sense of awakening, seeing the wondrous views all around them, and begin to understand how they, too, have something to offer as part of God's plan."

A version of this story appeared in the Dec 2-15, 2016 print issue under the headline: Scottish diocese hopes to be a faith refuge.