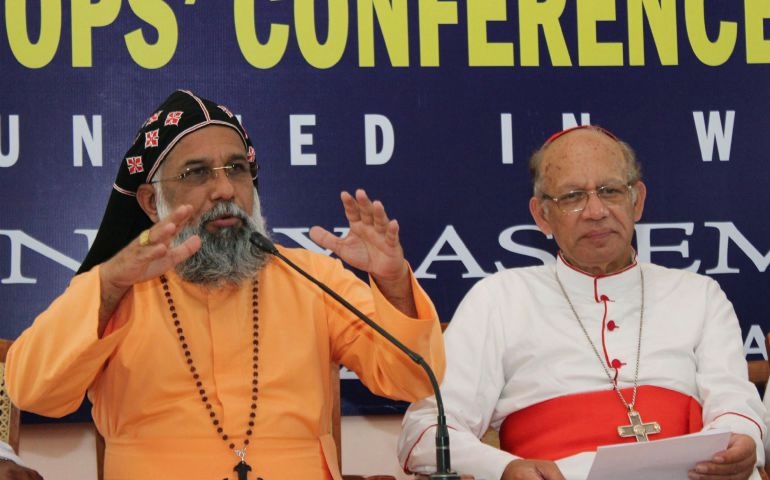 Three months after India's theologians and Catholic religious pressed a congress of bishops to act aggressively against a wave of sex abuse cases involving priests, no official response has come.

But top church leaders told National Catholic Reporter in exclusive interviews that bishops in India are following Vatican-approved guidelines for handling clergy abuse cases. The guidelines took effect in 2015 but have not been shared beyond bishops and religious superiors to protect the policy from being misused, an officer in the bishops' conference told NCR.

The March 22 letter, signed by 127 Catholic religious, theologians and feminists, was sent to Cardinal Baselios Cleemis, president of the Catholic Bishops' Conference of India, with copies to heads of India's three ritual churches.

The letter was spurred by the Feb. 28 arrest of Fr. Robin Vadakkumcherry who allegedly raped and fathered the child of a minor in his Kottiyoor parish. The local diocese removed the priest from his position upon his arrest and reportedly acted against another priest and five women religious charged in a cover-up.

Despite Pope Francis' call for "zero tolerance" by the church in handling cases of clergy abuse against minors, change has not been swift worldwide. Priests such as Vadakkumcherry have been more likely to face criminal charges first. And, just last week, Australian police announced pursuing charges against one of the pope's closest advisers, Cardinal George Pell, for historical sexual abuse against minors. The cardinal is required to appear in Melbourne Magistrates Court on July 18.

Astrid Lobo Gajiwala, a laywoman theologian who helped draft and mail the letter to Indian bishops, says that only Cardinal Oswald Gracias has acknowledged it with a response. The Bombay archbishop, who heads the Latin rite in India and is a member of the council of nine cardinals who advise the pope, expressed his support for the group's concerns April 6 and said guidelines would be published soon to tackle such cases.

In an early May interview with NCR, Cleemis said he found the recent upsurge in sexual abuse cases involving clergy in India "painful, shocking and damaging." He said the church has a responsibility to look into such an "unfortunate, immoral and unethical" act by a priest. "It cannot be simply neglected or sidelined," he asserted at the interview, held outside the biannual meeting of the bishops' conference standing committee in Bengaluru.

He also clarified that the standing committee meeting did not address the March 22 letter because the bishop of the diocese where the incident happened, Bishop Jose Porunnedom of Mananthavady, was not a participant. "It was not proper to discuss the case in his absence," he explained.

But Gajilwala says the non-response from other church leaders is "an insult" to the people who had signed the letter. The signatories included theologians, who have advised the bishops for decades, she says. Others were heads of Catholic institutions, provincials, activists and professionals.

"They wrote to their 'shepherds,' not to point fingers or make demands, but out of concern for both the victims of sexual abuse and the church. Common courtesy demanded a response," Gajiwala told NCR in late June.

Virginia Saldanha, another laywoman theologian who helped draft the letter, says, although the church leaders ignore them, women's groups and others keep writing, with the hope their efforts "will at least touch their conscience and do something."

Saldanha also explained that their earlier letters were sent from a core group that worked on the issue. "This time we decided to throw it open to a wide spectrum of people because of the anger generated at the stories of abuse coming out in the newspapers. We hoped that this wide spectrum of people would make an impact on the bishops and get them to act on the issue."

Cleemis acknowledged receiving the letter but said the theologians have demanded what already has been in force. He said that two years ago the conference had issued stringent standards to deal with clergy abuse of minors. The standards stipulated that dioceses and religious congregations set up committees to deal with such cases.

However, the standards remain a mystery for the public, and for priests and nuns. Gajiwala and Saldanha, who were participants in drafting the document initially, said they are unaware that the standards were released.

Saldanha questions the secrecy over such a document, which she asserts, is "meant to address a crime and should be publicized so that people can come forward to make their complaints."

Saldanha says the apparent secrecy over the standards is a strategy against the bishops' fear that their publication would lead to a deluge of complaints. "They are only behaving like the proverbial ostrich with heads buried in the sand. One day this issue is bound to implode and signs of this are already emerging," she told NCR.

Cleemis says people demanded action from the conference without realizing it has only an advisory role. It is for dioceses to implement the standards and ensure their strict adherence, he says. He was pleased that Mananthavady diocese, where the latest scandal erupted, and its Syro-Malabar rite have responded to the situation according to the standards.

While the cardinal claimed the document was public, Msgr. Joseph Chinnayyan, the conference's deputy secretary general who was also involved in the preparation, clarified that the document was circulated only to bishops and major superiors. The two groups were given strict instruction not to share its content with others lest it fall into the hands of those who may not use it with discretion, Chinnayyan told NCR on June 22.

The priest said the document, "Procedural norms for dealing with cases involving sexual abuses of minors," was issued on October 1, 2015 (feast day of St. Thérèse of the Child Jesus, patron of missions), and went into effect on November 1, 2015 (All Saints Day).

He said the theologians and others seem to confuse the standards for minors with another set of guidelines the conference has prepared to deal with clergy abuse of Catholic women religious. The standing committee approved the guidelines on treatment of women religious in September 2016, and Cleemis said they would be published once they were made comprehensive and legally tenable. Chinnayyan said the document, which is in the final stage, could be released this month.

Process, practice of standards on clergy abuse of minors

Chinnayyan said it took four years to prepare the standards on clergy abuse of minors. The Indian conference began the work immediately after the Vatican Congregation for the Doctrine of the Faith published its guidelines to deal with clergy abuses on May 3, 2011. The Vatican had asked episcopal conferences to prepare similar documents addressing their local needs.

Gracias, who headed the Indian conference in 2011, prepared a draft and circulated it among bishops and members of the Conference of Religious India, the national body of major superiors for both men and women religious. He also set up a subcommittee to incorporate the responses and prepare a second draft that he sent to Rome for approval in 2012.

By the time Gracias finalized the document with modifications suggested by Rome, his term ended and Cleemis replaced him as president in 2014.

Chinnayyan said Cleemis brushed up the final draft and got the two-part document approved by the conference's standing committee in 2014.

Reading from the document, which he keeps inside two envelopes and under lock and key, Chinnayyan said its introduction explains the standards to bishops and major superiors and ways to implement them.

The operative part aims at strict adherence to the procedures. "The Indian norms follow Pope Francis' policy of zero tolerance toward sexual abuse of minors," the monsignor said.

The conference had asked bishops to convene a meeting of their priests to explain the standards and procedures. Similarly, the major superiors were to do the same with their members.

Chinnayyan said the standards stipulate that a diocese prepare a code of conduct for church persons and institutions where minors are given particular care. He outlined the multi-phase process in the guidelines:

In a follow-up phone interview July 4, Chinnayyan said a diocese could very well act against an accused priest before all steps in the process are exhausted. If the preliminary committee and bishop agree there is truth to the allegation, the accused would be barred from exercising his duties, such as celebrating Mass, preaching, conducting the sacraments or fulfilling other roles, he said.

Chinnayyan said the guidelines do not direct church leaders to inform the police of any conclusions they reach about an abuse complaint.

Cleemis said he has been informed that all dioceses in India have set up committees.

A screen capture from a YouTube video shows Fr. Robin Vadakkumcherry, standing, at an event in Kottiyoor, India, in January. (YouTube/Anil Nair)​

Meanwhile the accused priest, Vadakkumcherry, approached courts twice for bail, but was rejected. He is now awaiting trial in a sub-jail in Tellicherry town in Kerala. Those charged in a cover-up of the incident are free on bail and awaiting court hearings.

The Mananthavady diocese removed Vadakkumcherry from all his posts the day he was arrested. Bishop Porunnedom said the priest's suspension and ban on exercising his priestly duties would remain in force until he is declared innocent.

Cardinal George Alencherry, who heads the Syro-Malabar Catholic Church, termed the case "very serious" and promised to take steps not to repeat such abuses in his church of about 5 million members. "The priest has committed a grave mistake. The Church would not protect the accused," the cardinal told reporters in Kochi, Kerala's commercial capital and his base, on March 5.

Cleemis welcomed the gesture of the Mananthavady Diocese and Porunnedom to comfort the victim and her family. Chinnayyan said it was in line with the conference standards for a bishop or major superior to keep in constant touch with the victim and the family after a complaint is raised. Such a step is not to alienate them or intimidate them, but to accompany them in their pain and anguish, the priest explained.

Police arrested Vadakkumcherry three weeks after a 16-year-old girl gave birth to a baby boy. The priest was accused of impregnating the girl, who was a student of his school. Vadakkumcherry first tried to implicate the girl's father as the abuser, but on March 31 a DNA test proved that Vadakkumcherry is the child's biological father.

Gajiwala expressed happiness that bishops of Assam in northeastern India recently issued standards to deal with abusive clergy. "The bishops there have made it very clear that they would suspend offenders and inform the civil authorities. Hopefully other dioceses have taken similar initiatives," she added.

On March 6 the Mananthavady Diocese issued a set of 12 guidelines to avoid future scandals and to bring transparency and propriety to the diocese. The guidelines, drafted by priests and pastoral council members, require all churches and presbyteries to install closed-circuit TV cameras and set up grievance committees in parishes.

The diocesan leaders asserted that the diocese would do nothing to protect the accused priest and his alleged associates.

Cleemis said the scandal became an excuse for the media to question even the church's existence. "The cases have caused great damage not to the dioceses but to the Church in Kerala and India. Not only Catholics — even Christians of other denominations and people of goodwill were very sad," the cardinal noted.

However, the Kottiyoor incident and Mananthavady Diocese's subsequent response have encouraged many other dioceses to address similar issues objectively and take steps to prevent such cases.

The scandals challenge bishops and other leaders to become humble while representing the church "with authenticity and credibility" to the public, Cleemis added.

[Jose Kavi is the editor-in-chief of Matters India, a news portal focusing on religious and social issues in India. He is a regular contributor to NCR and Global Sisters Report.]