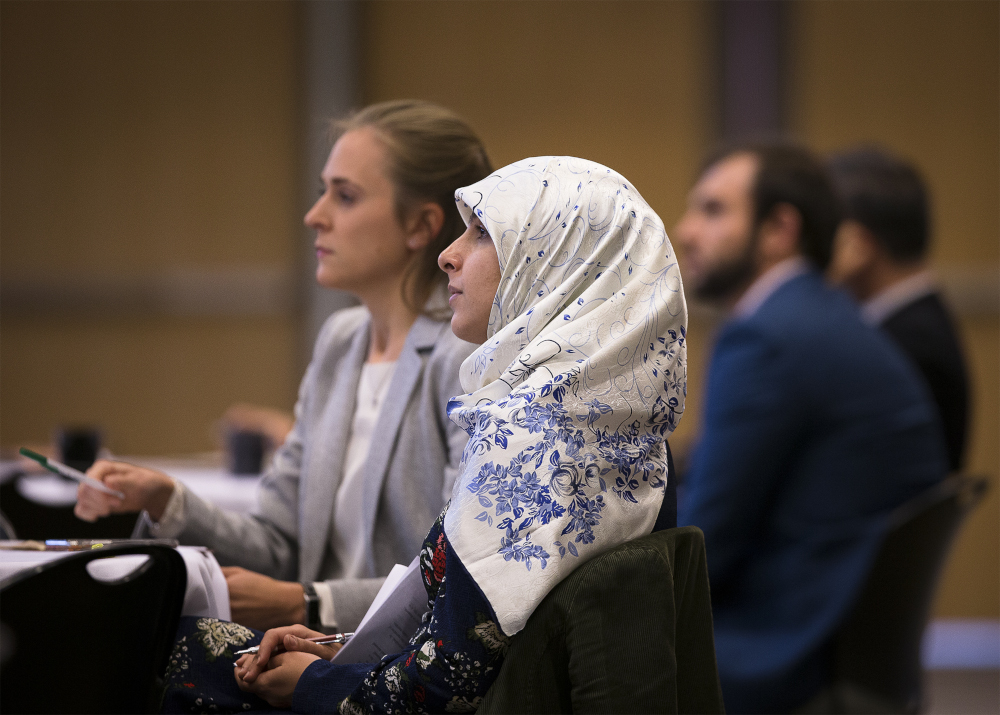 Muslims and Christians listen to a presentation Nov. 7, 2019, during "The Sultan and the Saint: The Spiritual Journey of Transformative Encounter" conference at The Catholic University of America in Washington. The event marked the 800th anniversary of the meeting of St. Francis of Assisi and Sultan al-Malik al-Kamil during the Fifth Crusade. (CNS/Tyler Orsburn)

Eight centuries ago, St. Francis of Assisi took a risk when he crossed the battlefield between Crusader and Muslim forces near Damietta, Egypt, desiring to meet Sultan al-Malik al-Kamil and preach his faith in Jesus Christ.

At the time – 1219 – Christian forces were in the midst of the Fifth Crusade, which was eventually repelled by the sultan's superior army near the town that was a center of trade and commerce on the Nile River where it flows into the Mediterranean Sea.

The future saint readily put his life on the line so he could witness his faith to the famed Muslim sultan, and in doing so both men came away with a new respect for the faith of the other, Franciscan Fr. Michael Calabria told a conference on that encounter with "the other" Nov. 7 at The Catholic University of America in Washington.

Early retellings of the meeting describe al-Kamil as willingly listening to St. Francis as he preached and being a gracious host, said Calabria, director of the Center for Arab and Islamic Studies at St. Bonaventure University in New York.

The future saint witnessed peacefully and his subsequent writings reveal the meeting had a profound impact on his life, the priest told participants in the event titled "The Sultan and the Saint: The Spiritual Journey of Transformative Encounter."

Other accounts of the meeting written years later by Franciscans and others describe a more "disputant" St. Francis, attempting to convert al-Kamil to Catholicism, he said, even though there is no evidence of such a strong stance by the saint.

While the sultan did not relinquish his Islamic faith, he asked his Italian visitor to pray for him so that he would follow God more closely, Calabria said.

In setting the scene for such an unlikely meeting, Lev Weitz, associate professor of history and director of Islamic world studies at The Catholic University of America, described how St. Francis would not have been much of an anomaly to al-Kamil, an educated man who appreciated cultural exchanges.

Damietta was not a city isolated from the world. As a major port, merchants from Africa, Asia and Europe – the Italian city-states in particular – passed through continuously, Weitz said. That means Latin-rite Catholics from Europe would hardly be an unusual site among the majority Muslim population.

Beyond trade, the eastern Mediterranean region experienced widespread intellectual and cultural exchanges in the 11th through 13th centuries and al-Kamil's court likely would have encountered people of various backgrounds, Weitz explained. Throughout the region, even worship sites were shared by members of both religions, he added.

So when Francis crossed the battlefield and was taken to al-Kamil by his troops, it was an opportunity for both men to learn from each other.

Undertaking such an encounter, it's unlikely St. Francis could have predicted his visit "would have been so inspirational to the people of today," said Imam Mohamed Bashar Arafat, president of the Civilizations Exchange and Cooperation Foundation, in Columbia, Maryland.

"To me St. Francis' mission was a sacred mission for every Muslim, every Christian, every human being, religious or nonreligious. It is a story of reaching out to the other for the sake of peace, reconciliation and harmony," Arafat told the conference.

St. Francis' example is an invitation to people today to leave their "comfort zone and accept the challenges" presented in life, to move beyond hatred and violence to achieve peace, he said.

Likewise, the custos of the Holy Land, Franciscan Fr. Francesco Patton, told the conference St. Francis' meeting with the sultan was "so important and significant for him and for us that in his writings after 1220 we find everywhere echoes and traces of the journey."

He pointed to how Francis reminds the faithful that "(we are) not to make quarrels or disputes, to be subjects and subject to every human creature for the love of God, confessing to be Christians."

In addition, he said, "we must be at the service of all for the love of God and it is essential to have a very clear Christian identity."

With such practices in mind, the Custody of the Holy Land that Patton oversees, continues ongoing collaboration through schools in which thousands of Christian and Muslim children are enrolled, cooperative programs for peace and service to migrants and refugees. Patton said such endeavors keep alive the memory of the historic encounter of cultures.

"The meeting at Damietta reminds us of how barren both the use of violence and how illusory is victory obtained by force, how fragile is any peace obtained with the defeat of the enemy," the custos said.

Pope Francis has repeatedly recalled the meeting himself. The dialogue that emerged between a poor Christian and a Muslim leader can serve as an example of the fraternity of humanity, Archbishop Christophe Pierre, papal nuncio to the United States, told participants.

St. Francis went across the war zone in an attempt to encounter the other, he said, and Francis invites the faithful to encounter others unlike them in the same spirit.

"We know the history, but we have a tendency to forget about that," he said.

"Francis came not as an ideologue, but as a missionary with a message of peace," he added. "He did not try to force the sultan to believe, rather his approach was to propose Jesus. The church must recognize that the faith can only be proposed. It can never be imposed."

Similarly, Archbishop Pierre continued, Francis has emulated the saint in stressing the fraternity of the human family throughout his papacy in the documents he has promulgated and the interreligious outreach he has undertaken.

In particular, Francis' meeting with Sheikh Ahmed el-Tayeb, the grand imam of al-Azhar, in the United Arab Emirates in February was noteworthy for the declaration both men signed to promote human fraternity and respect, he said.

"He sees human fraternity as a path for peace and mutual understanding in our world, a true force for good."