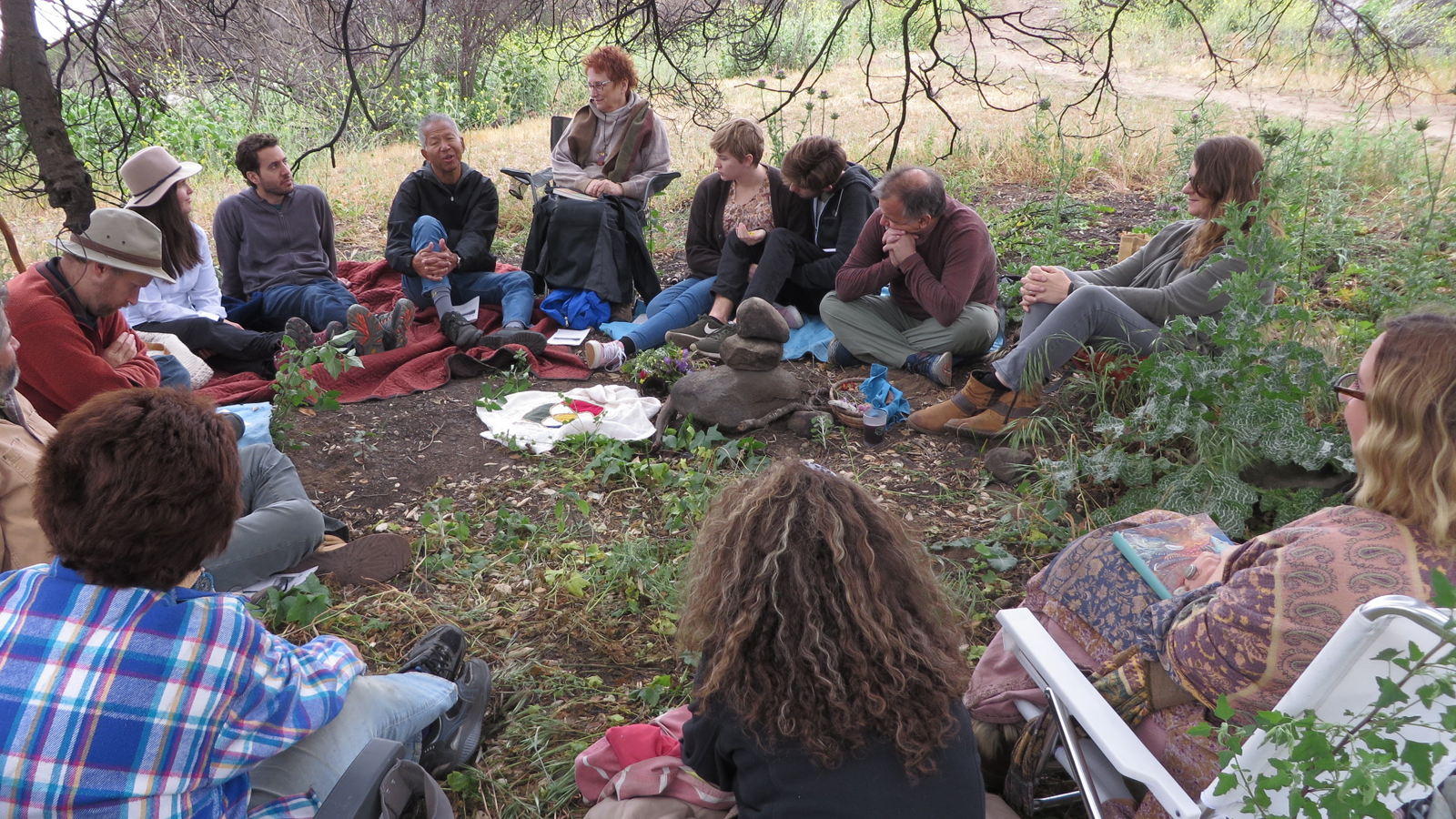 A dozen people gather in a quiet spot in the Ventura River Preserve about 70 miles north of Los Angeles for a Sunday meeting of the Ojai Church of the Wild. (RNS/Cathy Lynn Grossman)

In last year's inferno, this tiny city was ringed with fire: 100 mph winds drove blazes across every ridge around a valley so lovely it doubled as Shangri-La in the 1937 classic "Lost Horizon." Trees exploded and countless wild creatures died in the California wildfire.

Victoria Loorz feared for the fate of her "church" — a grove of shrubs under a generous oak by a river bend in the Ventura River where she regularly invited dozens of people to open their souls to heaven and earth.

Yet by Easter, Loorz and her fellow Christians and spiritual seekers in the Ojai Church of the Wild were once more clambering rock-to-rock across the river, along new paths the fire had cleared to that special place.

On one recent Sunday, 12 people walked silently among resilient, reborn wildflowers and the still-ashen branches of the Manzanita shrubs and then shared their thoughts, sang and prayed in a circle of blankets under the oak.

"I call this church 'The Conversation.' Conversation is God. It is love — not a noun but a verb. It's the interaction of all things in relation to each other," says Loorz, drawing on a verse from the first epistle of John. She uses a Facebook page to introduce her services and an email list of 85 people she notifies of times and places.

Pastors and lay leaders are beginning to organize services in 16 states, says Loorz, a graduate of the evangelical nondenominational Fuller Theological Seminary and an environmental activist. She is writing a book about "the transformational experiences of people have when they connect their own wild soul with God."

The Wild Church Network began in 2016, after Stephen Blackmer, an Episcopal priest who founded his independent Church of the Woods in Canterbury, New Hampshire, nearly four years ago, heard about Loorz and others. Loorz now works with him in the nonprofit Kairos Earth Foundation connecting conservationists and environmentalists with spiritual leaders.

"We began to realize there were a bunch of us doing similar things all across the U.S. and Canada, finding people who long to reconnect their religious practice with the natural world when traditional practice  inside a building, cut off from the world — no longer works for them," Blackmer says.

Their shared goal? To "reacquaint, recover and re-member our congregations as loving participants of a larger community."

Blackmer writes: "In this age of mass extinctions, we feel burdened by the love of Christ to invite people into direct relationship with some of the most vulnerable victims of our destructive culture:  our land, our waters, the creatures with whom we share our homes."

Offering Communion outside, he says, "helps us remember that the physical and spiritual worlds are completely bound up together. It becomes easy to see how everything grows, lives, dies and is returned into the earth where it takes on a new form. Its spark of life is transformed."

Blackmer was transformed himself when, after a career as a professional environmentalist who never went to church, he discovered the spiritual dimensions of his work, began a journey to the priesthood and founded a nonprofit environmental group, Kairos Earth.

Blackmer now holds two services on Sundays out in the woods. In extreme weather he dips into a little barn with a wood stove because, he notes, "it's hard to be reverential if you are shaking with cold."

The worshippers consider the moose, bears, deer and foxes as part of their small congregation. The human head count is typically a dozen people who gather to pray and "look to the Psalms where the land and trees are singing God's praises," Blackmer says.

Wild Church leaders are careful to distinguish what they do from paganism.

"My tradition is Christian but my objective is not that people become Christians but that they find a way to connect with holiness that is authentic for them — an expanded way of living and an expanded sense of Christ," says Loorz.

At one service, a dozen people tiptoed across the river to join Loorz. Neil Barnsdale, who grew up Presbyterian but drifted away from church, says Church of the Wild offered him "recognition of nature with a Christian underpinning."

Jennifer Howard, who brought her 6-year-old daughter, Poeme, added, "The wild has been my church since childhood."

The service began with a reading, then a moment of silence "to listen to the wind, your breath, the water, the birds," Loorz says.

Loorz invites everyone to "wander and wonder" separately for 45 minutes to "read the text of the landscape and give it your attentiveness."

In a moment everyone is out of sight. When they gather again, they share their thoughts.

Joanna Yabrof gathers a wildflower bouquet, "now that a season of blackness has burst into bloom."

Poeme attempts to build a nest of leaves and sticks.

Barnsdale muses about a broken rock: "Why do things break apart when they do? Is it random or part of a bigger plan?"

Laurie Walters, whose husband died last summer, looks from the bees to the rocks and quietly says, "Life and death are making conversation all the time."

"The Conversation" service concludes with a song, written by Walters' late husband. It begins:

"God on the Outside. Endlessly spacious

Ageless, audacious, fecund and wild, I am

Laid low and humbled, Awed by the splendor,

Let me remember: I am the Universe's child."