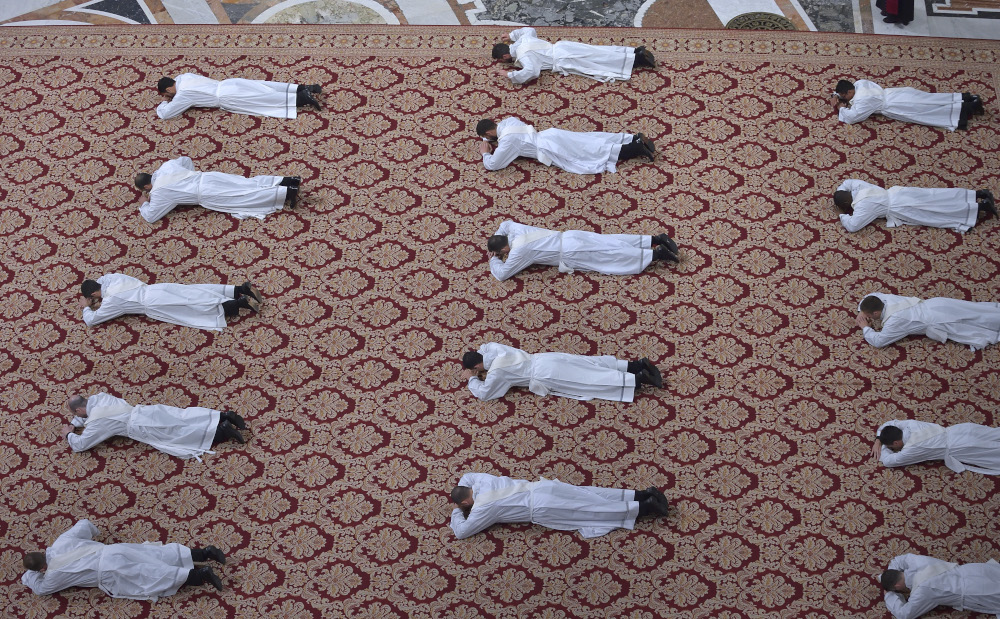 Candidates for the priesthood lie prostrate during an ordination Mass celebrated by Pope Francis in St Peter's Basilica at the Vatican May 12, 2019. The pope ordained 19 new priests. (CNS/Stefano Spaziani)

The priesthood is not a "cultural association or a union," but a ministry of mercy anchored on Christ's mission to bring hope to the downtrodden and comfort to those who suffer, Pope Francis told new priests.

"The Lord wished to save us freely. It was he who told us, 'Give freely what you have received freely.' The celebration of the Eucharist is the culmination of the Lord's gratuitousness. Please, do not dirty it with petty interests," he said.

Celebrating Mass May 12 in St. Peter's Basilica, Francis ordained 19 new priests: 11 who studied at three different diocesan seminaries in the city and eight from the Priestly Society of the Holy Cross, an association of diocesan clergy associated with Opus Dei.

Reading the traditional homily from the rite of ordination, the pope reminded the new priests of their duties as ministers of Christ and the call to be "men of prayer, men of sacrifice so that through the word (of God) and your example you may build the house of God, which is the church."

However, departing from his prepared remarks, he also urged them to "never tire of being merciful."

"Through the sacrament of penance, you will forgive sins in the name of God, Christ and the church," the pope said. "Be merciful just as the Father, just as Jesus, has been merciful with us, with all of us."

After the ordination, Francis greeted the faithful waiting in St. Peter's Square and led them in praying the "Regina Coeli" prayer.

Recalling the Sunday Gospel reading from St. John, in which Jesus tells his disciples that "my sheep hear my voice; I know them, and they follow me," the pope said that the Good Shepherd "is attentive to each one of us, he looks for us and loves us."

"Let us not forget that Jesus is the only shepherd who speaks to us, who knows us, who gives us eternal life and guards us," he said.

After praying the "Regina Coeli" prayer, the pope invited two of the newly ordained priests to join him in blessing the crowd outside St. Peter's Square.

Reminding the crowd that Sunday also marked the World Day of Prayer for Vocations, Francis urged people to pray for "courageous" men and women who are called to the priesthood and religious life because "it is always a risk to follow Jesus."

"I invite you to remember those who the Lord continues to call by name, as he did one day with the apostles along the coast of the lake of Galilee so that they may become 'fishers of men,'" the pope said.