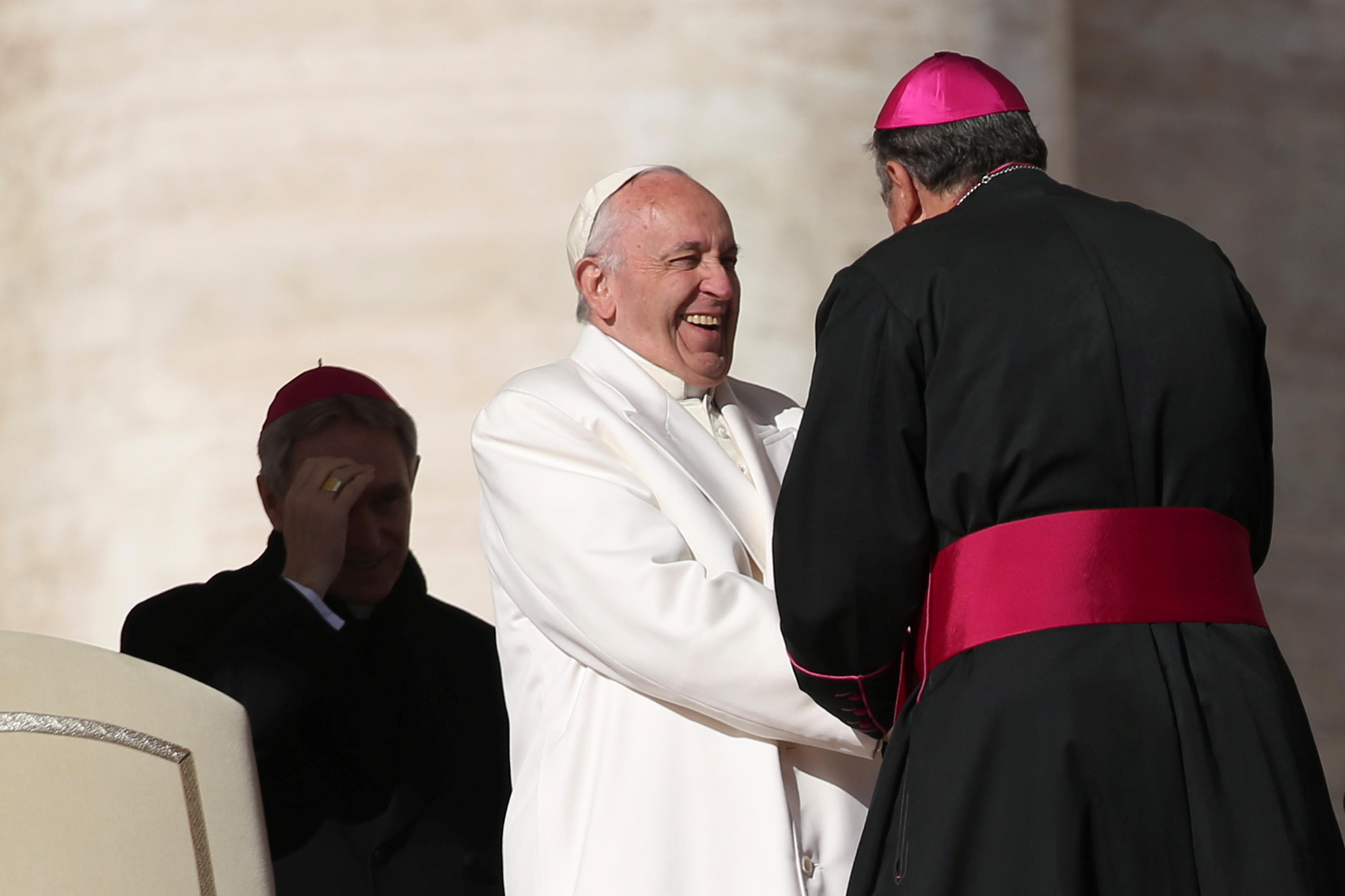 Pope Francis smiles as he greets a prelate during his general audience Jan. 24 in St. Peter's Square at the Vatican. (CNS/Tony Gentile, Reuters)

A truly pastoral minister never leaves people to suffer on their own or to become a victim to their own errors and confusion, Pope Francis told members of the Congregation for the Doctrine of the Faith.

An authentically pastoral approach is any effort that seeks to take people by the hand, "when they have lost a sense of their dignity and destiny, so as to lead them with confidence to rediscover God's loving paternity, their good destiny and ways to build a more humane world. This is the great task awaiting your congregation and every other pastoral institution in the church," he said.

The pope met Jan. 26 with some 80 cardinals, bishops, priests and lay people who were meeting in Rome for the congregation's plenary session.

The doctrinal congregation, the pope said, supports the bishops in their teaching task by safeguarding the faith and the sanctity of the sacraments and doing so by using pastoral discernment.

Some issues the congregation has had to examine, he said, include cases involving "delicta graviora" -- "more grave crimes" against church law. That includes clerical sex abuse -- and questions involving what is known as the dissolution of marriages "in favorem fidei" (in favor of the faith) when a Catholic has married someone who is not baptized.

The congregation's work is critical in such "fluid and changing" times when people "no longer know who they are and, therefore, struggle to recognize how to do the right thing," he said.

The doctrinal congregation's job is to underline the "transcendental vocation of man" and the human person's faculty of reason, which can know the good and the true through faith in Christ. "Nothing helps people know themselves and God's plan for the world better than opening one's mind to the light that comes from God," he said.

Francis thanked congregation members for using their plenary assembly to look at issues regarding terminal illness. The current-day insistence on absolute autonomy and self-determination, he said, has led to an increase in nations allowing euthanasia, and accepting it as a "civilized" choice.

The congregation also was completing a study of the ethical implications of issues in the field of economy and finance by focusing on people being relational and reasonable, and, therefore, able to act in accordance to an objective moral order, he said.

"Economic activity is to be carried on according to its own methods and laws, but within the limits of the moral order," Francis said, quoting from "Gaudium et Spes," the Second Vatican Council's Pastoral Constitution on the Church in the Modern World.

The pope also mentioned the congregation's work in looking at the nature of salvation and the meaning of redemption. There is an individualistic tendency to believe salvation is due to one's own efforts, he said, when in fact for the Catholic Church, "salvation consists in communion with the risen Christ who, thanks to the gift of his Spirit, introduced us to a new order of relationship with the father and among humankind."

Addressing so many challenges that touch so many people makes the congregation's mission "eminently pastoral," he said.

"Authentic pastors," Francis said, "are those who do not abandon people (to be left) on their own nor do they leave them in the throes of their confusion and their errors, rather, with the truth and mercy they lead them back to rediscover their authentic nature in the good."