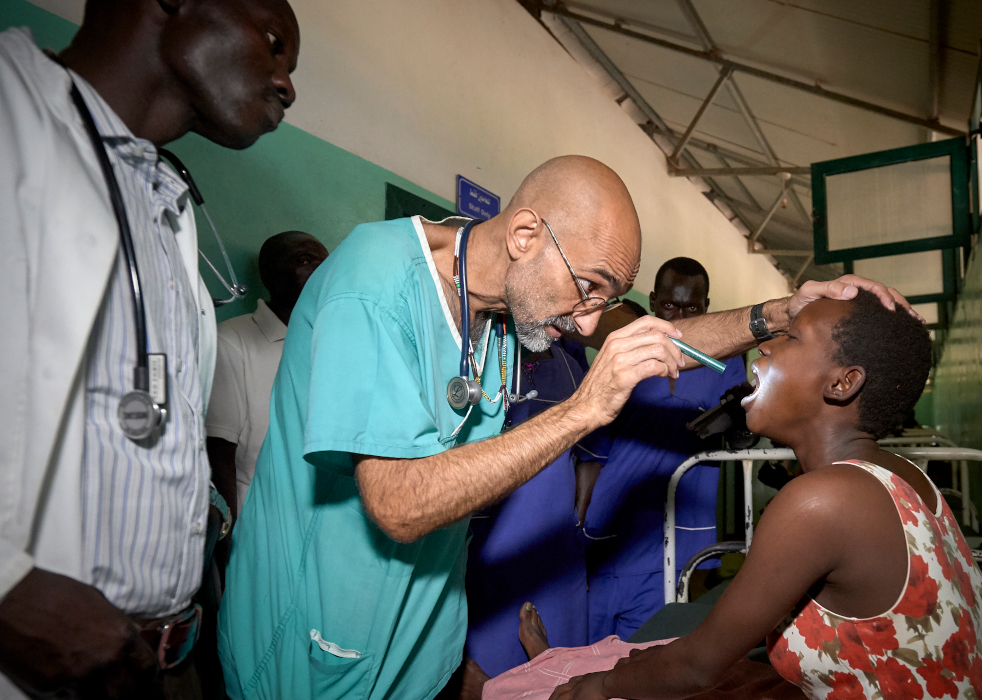 Dr. Tom Catena, a Catholic lay missionary from the United States, examines a patient during rounds at the Mother of Mercy Hospital in Gidel, a village in the Nuba Mountains of Sudan, April 26, 2018. Pope Francis told the pontifical mission societies in a message May 21, 2020, that those involved with the church's missionary activity "should never justify their lack of concern for the poor with the excuse, widely used in particular ecclesiastical circles, of having to concentrate their energies on certain priorities for the mission." (CNS/Paul Jeffrey)

A missionary or church reality that is truly inspired by the Holy Spirit "manifests predilection for the poor and vulnerable as a sign and reflection of the Lord's own preference for them," Pope Francis told the pontifical mission societies.

In a message May 21, the pope said that those involved with the church's missionary activity "should never justify their lack of concern for the poor with the excuse, widely used in particular ecclesiastical circles, of having to concentrate their energies on certain priorities for the mission."

"For the church, a preference for the poor is not optional," he said.

The mission societies, which are under the Congregation for the Evangelization of Peoples, include the Society for the Propagation of the Faith, the Missionary Childhood Association, the Society of St. Peter Apostle and the Missionary Union of Priests and Religious.

The societies help poor churches and communities around the world and support more than 9,000 health clinics, 10,000 orphanages, 1,200 schools, 80,000 seminarians and 9,000 religious sisters and brothers in more than 1,150 mission dioceses — mostly in Africa and Asia.

Due to the coronavirus pandemic, the societies' annual general assembly was canceled, prompting the pope to send them the message "in order to share what I had intended to say to you personally."

Reflecting on the celebration of the feast of the Ascension, the pope said that it was that event, followed by the coming of the Spirit on Pentecost, that defines the church's mission, which "is the work of the Holy Spirit and not the consequence of our ideas and projects."

"This is the feature that makes missionary activity bear fruit and preserves it from the presumption of self-sufficiency, much less the temptation to commandeer Christ's flesh, ascended to heaven, for narrowly 'clerical' projects and aims," he said.

Recalling his apostolic exhortation "Evangelii Gaudium" ("The Joy of the Gospel"), the pope said he wished to reiterate several "features of mission" that center on faith as a gift from God and not a result of proselytism.

"If one follows Jesus, happy to be attracted by him, others will take notice," the pope said. "They may even be astonished. The joy that radiates from those attracted by Christ and by his Spirit is what can make any missionary initiative fruitful."

He also encouraged them to maintain gratitude, humility and a focus on facilitating an encounter with Christ, recognizing "the real condition of real people, with their own limits, sins and frailties" instead of taking on an attitude "like those frustrated vendors who complain that people are too unsophisticated to be interested in their wares."

The church, he said "is not a customs office and anyone who participates in the mission of the church is called not to impose unnecessary burdens on people already worn out or to require demanding programs of formation in order to enjoy what the Lord gives easily, or to erect obstacles to the will of Jesus, who prays for each of us and wants to heal and save everyone."

He also warned of situations in the church today where "the primacy of grace appears to be no more than a theoretical concept or an abstract formulation."

"Instead of leaving room for the working of the Holy Spirit, many initiatives and entities connected to the church end up being concerned only with themselves," the pope said. "Many ecclesiastical establishments, at every level, seem to be swallowed up by the obsession of promoting themselves and their own initiatives, as if that were the objective and goal of their mission."

The pope also urged the mission societies to avoid certain "pitfalls and pathologies" that may threaten their unity in faith, such as self-absorption that can cause church organizations and agencies to devote "energy and attention primarily to promoting themselves and to advertising their own initiatives."

He also called on the societies to avoid the trap of presuming to "exercise supremacy and control over the very communities they are meant to serve" as well as falling prey to elitism and striving "to increase their own influence in collusion or in competition with other ecclesiastical elites."

A sense of superiority derived from elitism, he said, can create intolerance "toward the rest of the baptized, toward the people of God who may attend parishes and visit shrines but are not 'activists' busy in Catholic organizations."

Francis encouraged the pontifical mission societies to let their work be illuminated by the "spark of true love for the church as a reflection of love for Christ."

"Move forward with enthusiasm!" the pope said. "There is much to do on the journey that awaits you. If there are changes to make in procedures, it is good that these point toward unburdening rather than increasing the load, aiming at operational flexibility and not producing more rigid bureaucracies that involve the threat of introversion."