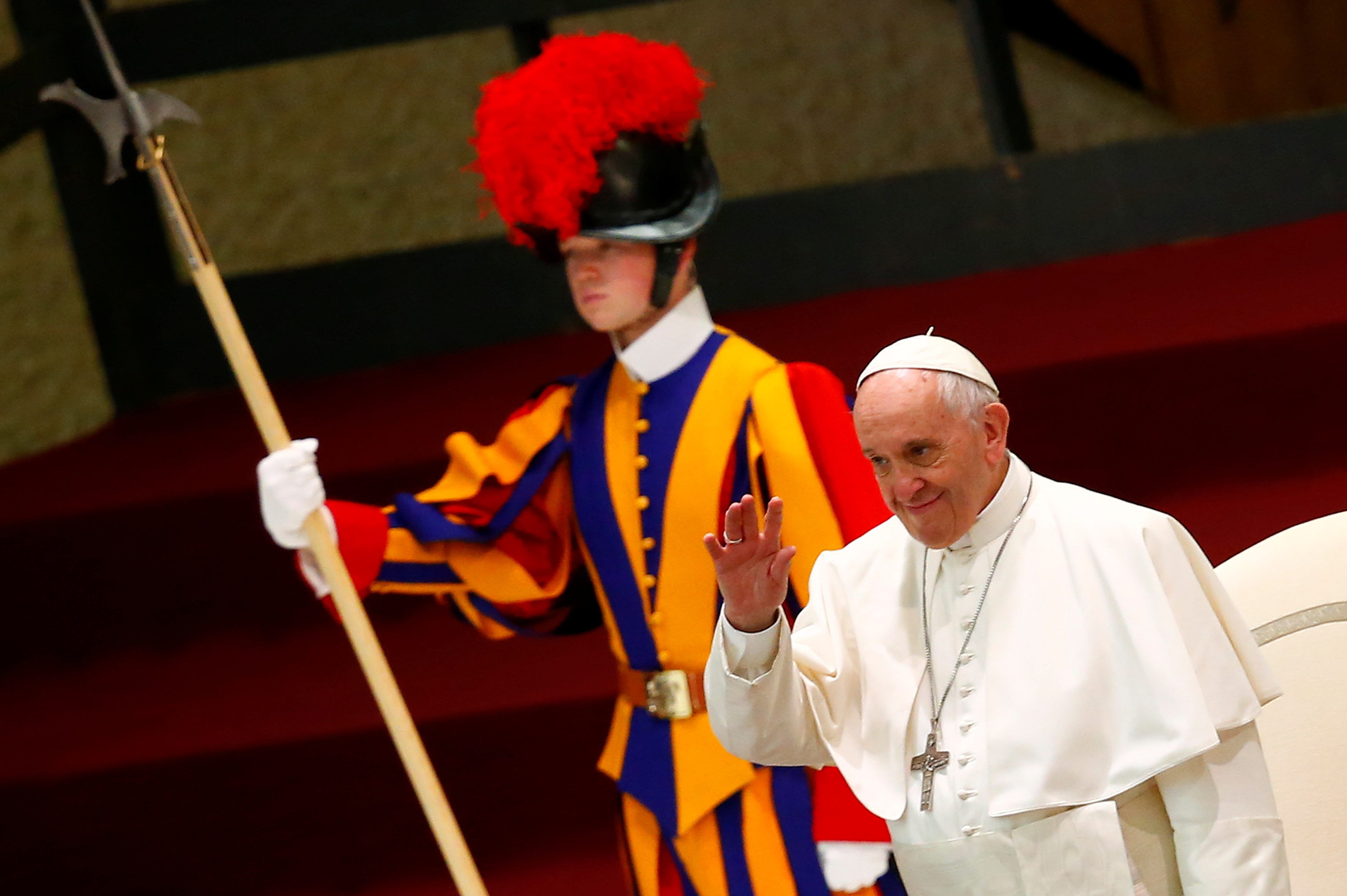 Pope Francis waves as he arrives to lead his general audience in Paul VI hall at the Vatican Dec. 13. (CNS/Tony Gentile, Reuters)

Just like a plant needs sun and nourishment to survive, every Christian needs the light of Sunday and the sustenance of the Eucharist to truly live, Pope Francis said.

"How can we carry out the Gospel without drawing the energy needed to do it, one Sunday after another, from the limitless source of the Eucharist," he said Dec. 13 during his weekly general audience.

"We don't go to Mass to give something to God, but to receive from him that which we truly need," the pope said. Sunday Mass is the time and place Christians receive the grace and strength to remain faithful to his word, follow his commandment to love others and be credible witnesses in the world.

The pope continued his series of audience talks on the Mass in the Vatican's Paul VI hall, which was decorated with a large Christmas tree and a life-sized Nativity scene. A number of people in the audience hall handed the pope -- who turns 81 Dec. 17 -- Christmas cards, notes and a chocolate cake.

In his catechesis, the pope responded to the question of why it is so important to go to Mass on Sundays and why it is not enough just to live a moral life, loving others.

Sunday Mass is not simply an obligation, he said. "We Christians need to take part in Sunday Mass because only with the grace of Jesus, with his presence alive in us and among us, can we put into practice his commandment and, in this way, be his credible witnesses."

"Just like a plant needs the sun and nourishment to live, every Christian needs the Sunday Eucharist to truly live," he said in summarized remarks to Arabic speakers.

"What kind of Sunday is it for a Christian if an encounter with the Lord is missing?" he asked in his main talk.

Unfortunately, in many secularized countries, the Christian meaning of the day has been lost and is no longer "illuminated by the Eucharist" or lived as a joyous feast in communion with other parishioners and in solidarity with others, he said.

Also often missing is the importance of Sunday as a day of rest, which is a sign of the dignity of living as children of God, not slaves, he said.

"Without Christ, we are condemned to be dominated by the fatigue of daily life with all its worries and the fear of tomorrow. The Sunday encounter with the Lord gives us the strength to live today with confidence and courage and to move forward with hope," he said.