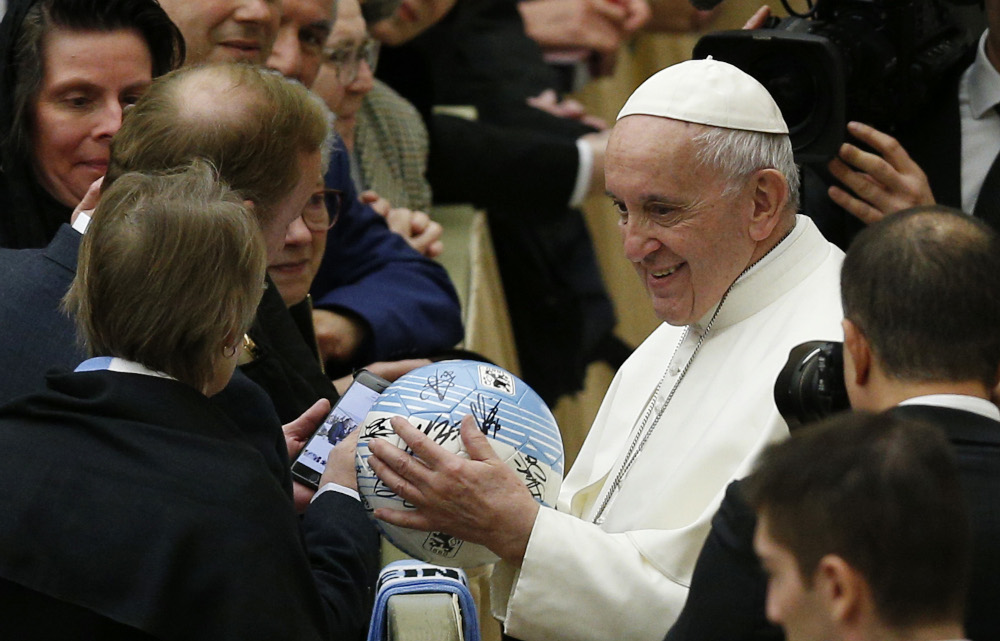 Pope Francis holds a soccer ball presented by someone in the crowd during his general audience in Paul VI hall at the Vatican Feb. 13. (CNS/Paul Haring)

Prayer is not just a private and intimate dialogue between a person and God, but rather an opportunity for Christians to bring the needs of others before the Lord, Pope Francis said.

"There is no room for individualism in the dialogue with God," the pope said Feb. 13 during his weekly general audience. "There is no display of one's own problems as if we were the only ones in the world who suffer. There is no prayer raised to God that is not the prayer of a community of brothers and sisters."

Arriving at the Paul VI audience hall, the pope was welcomed by the sound of a children's choir singing a song based on his own teaching of the three words that are important for family life: "please," "thank you" and "sorry."

Walking down the center aisle of the hall, the pope greeted the joyful pilgrims who held out their hands to greet him, have their religious objects blessed or their babies kissed.

Continuing his series of talks on the "Our Father," the pope focused his reflection on Jesus' instructions on how to pray, which he said was a secret act that is "visible only to God."

While prayer is an intimate act, akin to the "exchange of glances between two people who love each other," Francis said that true Christians also carry in their hearts their loved ones and those who suffer.

The pope highlighted the "impressive absence" of the word "I" throughout the text of the "Our Father," even though, he said, it is a word "that everyone holds in high esteem."

He also noted that the prayer's petitions are made on behalf of "us," for example, "give us this day our daily bread; forgive us our trespasses; lead us not into temptation; deliver us from evil."

"Even the most basic human questions – such as that of having food to extinguish hunger – are all in the plural form," the pope said. "In Christian prayer, no one asks for bread for himself: he pleads for it for all the poor of the world."

Departing from his prepared remarks, Francis recalled a conversation with a prison chaplain who asked him what was the opposite of the word "I."

"Naively, I said, 'You.' (The chaplain replied), 'Ah, that is the beginning of war. The opposite of "I" is "us," where there is peace, everyone together.' It is a good teaching that I received from that priest," the pope said.

Christians, he added, must always include the difficulties, sufferings and struggles of others in their prayers before God. If one isn't aware or doesn't take pity on those less fortunate, "then one's heart is made of stone."

"Saints and sinners, we are all brothers and sisters loved by the same father," Francis said. "And toward the end of life, we will be judged on love. How we have loved. Not just sentimental love but compassionate and concrete love according to the Gospel rule: 'Whatever you did for one of these least brothers of mine, you did for me.'"