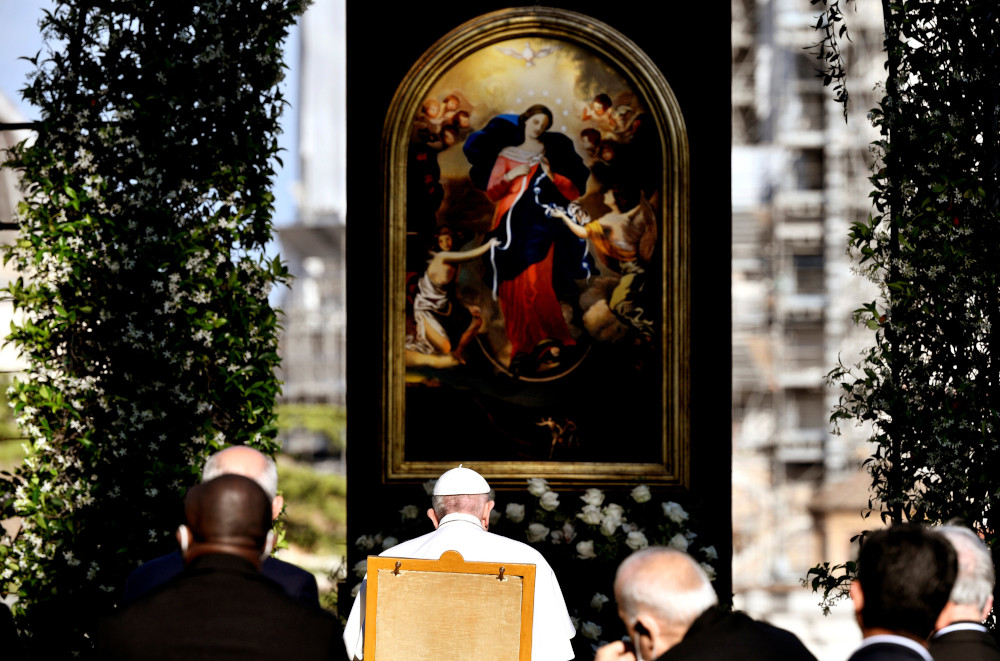 Pope Francis, seated before an image of Our Lady, Undoer of Knots, leads an evening Marian prayer service in the Vatican Gardens May 31, 2021. The service finished a monthlong rosary marathon to pray for the end of the COVID-19 pandemic. (CNS photo/Reuters pool/Filippo Monteforte)

Reaching the finish line of a monthlong rosary marathon, Pope Francis again turned to Mary, asking her to untie specific knots that have individuals and the whole world tangled in suffering and difficulty, either because of the COVID-19 pandemic or people's selfish reactions to it.

A German image of Our Lady, Undoer of Knots — an image of Mary beloved by the pope — made a pilgrimage to the Vatican Gardens and was the centerpiece of the early evening prayer service May 31.

"Each day, taking our rosaries in our hands, we have turned our eyes to you, Mother of Mercy, pleading with you that the pandemic would end and humanity could resume its daily life with greater security," the pope said as he introduced the prayer.

Pope Francis had started the month reciting the rosary in St. Peter's Basilica. Each day afterward, the prayer was led by people gathered at a different Marian shrine or church around the world and was livestreamed on Vatican Media.

For the final rosary recitation, Bishop Bertram Johannes Meier of Augsburg, Germany, gave the pope a special copy of an oil painting of Mary untying knots from a ribbon; the original, painted by Johann Georg Melchior Schmidtner, hangs in an Augsburg church where Pope Francis saw it as a student and began sharing the devotion with others.

After the recitation, the copy was delivered to the Domus Sanctae Marthae, where Pope Francis lives.

In his opening prayer at the rosary, Pope Francis said, "This evening we gather before you, our Virgin Mother, venerated in this image as the one who undoes knots. Many, in fact, are the knots entwined around our existence and binding our activities. They are the knots of selfishness and indifference, economic and social knots, knots of violence and war."

A group of children who recently received their first Communion at a parish in Viterbo — the first in Italy to become a vaccination center — recently confirmed young people, a Scout troop and several families, including newlyweds and expectant parents, joined the pope for the prayer in the gardens. A total of about 300 people sat under umbrella pines and palm trees, gazing past arches of jasmine toward the Marian image and the dome of St. Peter's Basilica behind it.

Each of the glorious mysteries of the rosary was preceded by a short Bible reading and a special prayer about a "knot" needing to be undone: individualism and indifference; unemployment; domestic violence and social tensions arising from "injustice and a lack of solidarity"; sickness and a lack of solidarity in providing health care for all; and anything holding individual Catholics and their parishes back from gathering for prayer and formation and reaching out to those in need.

After reciting the rosary, Pope Francis crowned the image of Our Lady, Undoer of Knots.

"You, who know how to untie the knots of our existence and know the desires of our hearts, come to our aid," the pope prayed. "We are certain that, as at Cana in Galilee, you will ensure that joy and celebration will return to our homes after this time of trial."