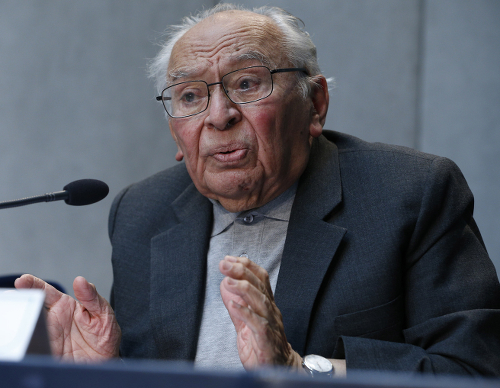 Dominican Fr. Gustavo Gutierrez speaks at a press conference at the Vatican in 2015. (CNS photo/Paul Haring)

Pope Francis revealed he once concelebrated Mass at the Vatican with Cardinal Gerhard Müller, then the prefect of the doctrinal congregation, and Dominican Fr. Gustavo Gutiérrez, a Peruvian often credited with founding the sometimes controversial field of liberation theology.

In a question and answer session with members of the Jesuit order in Panama last month, the text of which was made public for the first time Feb. 14, the pontiff joked that if someone from decades ago had predicted that such an event would occur "they would be taken as a drunk."

Although it was previously known that Francis had met privately with Gutiérrez at the Vatican's Domus Sanctae Marthae in September 2013, there had been no indication the two had celebrated the liturgy together, or that Müller had also taken part.

The pope spoke about Gutierrez in Panama while lamenting that some critics of liberation theology inside the church hierarchy had painted with a broad brush, "condemning all of the Jesuits in Central America ... without making any distinctions."

Francis recounted being on a flight to Rome some decades ago, and meeting a Central American bishop aboard the plane. The future pope asked the prelate about the sainthood cause for the late Salvadoran Archbishop Oscar Romero, who was murdered in 1980.

"Do not even speak of it!" the pontiff remembered the bishop replying, according to a transcript of the meeting released by La Civiltà Cattolica. "It would be like canonizing Marxism!"

"That bishop went from criticizing Romero to criticizing the Jesuits of Central America," said Francis. "He was not the only one to think like that. At the time, some other members of the ecclesiastical hierarchy were very close to the regimes of the era, they were very 'inserted.'" 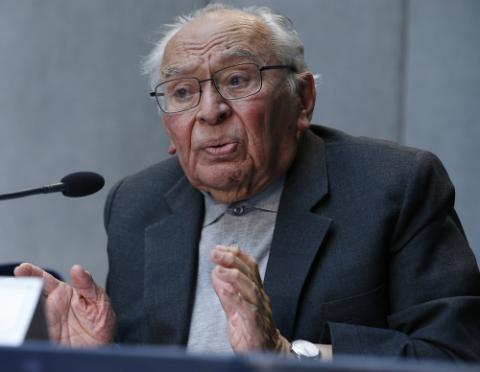 Dominican Fr. Gustavo Gutierrez speaks at a press conference at the Vatican in 2015. (CNS photo/Paul Haring)

Romero was shot dead while celebrating Mass. He had vocally criticized the Salvadoran government in the lead up to the country's bloody 1979-92 civil war.

The archbishop's sainthood cause had languished for years under the papacies of John Paul II and Benedict XVI, but Francis made the Salvadoran a saint last October.

Liberation theology focuses on Jesus' role in redeeming humanity not only from sin but also from unjust political, social, or economic conditions.

Gutiérrez, who published A Theology of Liberation in 1971, was one of many liberation theologians under investigation by the doctrine office when it was under the leadership of Cardinal Joseph Ratzinger, the future Benedict XVI.

In several public statements, John Paul II said Marxism unduly influenced the work of Gutierrez and others -- at one point in 1979 even saying their work "does not tally with the Church's catechisms."

Francis acknowledged that some liberation theologians "did lose their way a bit," but said their work came in the context of working in countries under the rule of dictatorships "of terror."

"Today we old people laugh about how worried we were about liberation theology," said the pontiff. "What was missing then was communication to the outside about how things really were."

"Let me tell you a funny thing," the pope continued. "The one most persecuted, Gustavo Gutiérrez, the Peruvian, concelebrated Mass with me and the then-Prefect of the Congregation for the Doctrine of the Faith, Cardinal Müller."

"It happened because Müller himself brought him to me as his friend," Francis added. "If anybody had said back then that one day the prefect of the Congregation for the Doctrine of the Faith would bring Gutiérrez to concelebrate with the pope, they would be taken as a drunk."

Müller and Gutiérrez are known to be friends. In 2014, the cardinal published a book largely focused on explaining and defending liberation theology, which contained two chapters written by the theologian.

Francis was also asked in the Panama meeting about the sainthood cause for Salvadoran Jesuit Fr. Rutilio Grande, who was murdered three years before Romero and was a friend of the archbishop.

The pope said the process of declaring Grande a martyr, which would allow the Jesuit to be beatified, is "going well."

The pontiff also revealed that he has a frame in the entryway to his room that contains a piece of fabric stained with Romero's blood and notes from a catechesis given by Grande.

"I was very devoted to Rutilio, even before knowing well the figure of Romero," said Francis. "When I was in Argentina, his life struck a chord with me, his death moved me."

"He was a prophet of bearing witness," said the pope. "He said what he needed to say, but it was his witness, that of martyrdom, that in the end moved Romero. It was grace."

A version of this story appeared in the March 8-21, 2019 print issue under the headline: Francis reveals he concelebrated Mass with Müller, Gutiérrez.