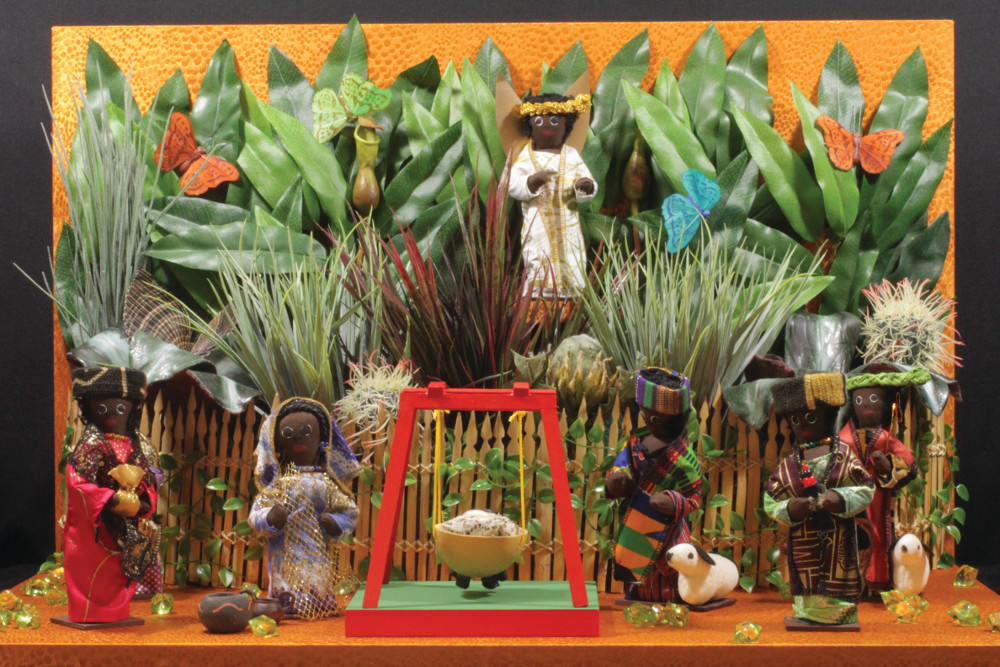 The Marian Library at the University of Dayton draws interest from the faithful and the curious the world over, with many of them sending in prayer cards, bottles of holy water from sacred sites, and statues of the Blessed Mother to be considered for study and display. Housed under the university libraries, along with the International Marian Research Institute,* the library will celebrate its 75th anniversary in 2018.

For more information about the collections of Marian art, books, and artifacts, visit the International Marian Research Institute at https://udayton.edu/imri/. Click on the All About Mary page to access the institute's comprehensive online encyclopedia.

The extensive collection — which is considered the definitive one in North America — includes everything from scapulars to miraculous medals, postage stamps, wine labels, materials from shrines to Mary, nativity scenes, and, of course, rosaries, including some that glow in the dark, and even one you can paste on your steering wheel, to pray while driving.

For the holidays, the library will put on display some of its collection of crèches, which includes about 3,500 sets from 110 nations. Last year's exhibit featured Mexican crèches, while this year's will focus on nativity scenes from Africa and Central and Eastern Europe. The library also loans out hundreds of crèches every year.

"We have a huge, huge collection of nativity scenes from all over the world," said Cilla Shindella, the university's executive director of news and communications. "Africa, with beaded elephants and lions at the manger scene; Alaska with polar bears. It's unbelievably broad."

The library is also home to more than 100,000 books and pamphlets — many of them centuries old — in more than 50 languages. One of the oldest is a book of sermons about Mary from 1473. It is particularly noteworthy, said Sarah Cahalan, the library's director, because, while much of it is in Latin — the standard scholarly language — some is in Italian, "which demonstrates strong popular devotion to her," she said.

Of equal note is a collection of Mexican books from the 1600s about the apparition of Our Lady of Guadalupe in 1531.

"You don't really think about printing presses in Mexico," said Cahalan. "That's really interesting, because you just see the borderless and timeless appeal of Mary."

"And as you can imagine," she added, "a lot of our most dedicated library users are people with their own personal devotion. We get calls or visits from people who have a devotion to a particular apparition."

Our Lady, Undoer of Knots, is one that has become more popular recently, she said, because Pope Francis has a particular devotion to her.

"Obviously, we are interested in dogma and doctrine and specific practices," said Cahalan, "but we're also interested in collecting the whole lowercase catholic experience of Mary, as well."

Recent exhibits in the library have included a show of contemporary oil paintings of Mary and flowers that depicted her through nature, history, and spirituality; illustrations and engravings related to the Litany of Loreto; and Marian art of Asia. The current exhibit is on emblems of the Immaculate Conception.

Marianist Fr. Johann Roten — who speaks nine languages fluently and ministers in Polish, Lithuanian, and Hungarian in some Dayton parishes — headed the institute and library for 15 years and now acts as director of research and special projects.

Roten noted that images and language about Mary can be found in Islamic, Jewish, and Asian texts, art, and culture. She appears on postage stamps in Islamic and secular countries, he said, and on not a few wine labels from France and Germany.

"I don't remember any California wines," he said, but "there are quite a lot of things in between the stamps and the wine labels. When you look at the variety of Marian related books and objects, it confirms, once again, that this particular lady has been, if I may say, all over the place."

Last year, the Marian Library won the Catholic Library Association's 2016 Aggiornamento Award. It is housed, along with the U.S. Catholic Special Collection, within the main university library. The Catholic Collection is home to books, journals, and the Lois Pettit Nun Figurine Collection.

"I think it's just as precious as heck," said Shindella of the nun figures, which are dressed in the habits of every order of Catholic sister. "They're very detailed, with little rosaries, little wimples — order after order after order."

The dolls, like the crèches, are on public display, and are extremely popular with visitors.

*The location of the Marian Library has been clarified.