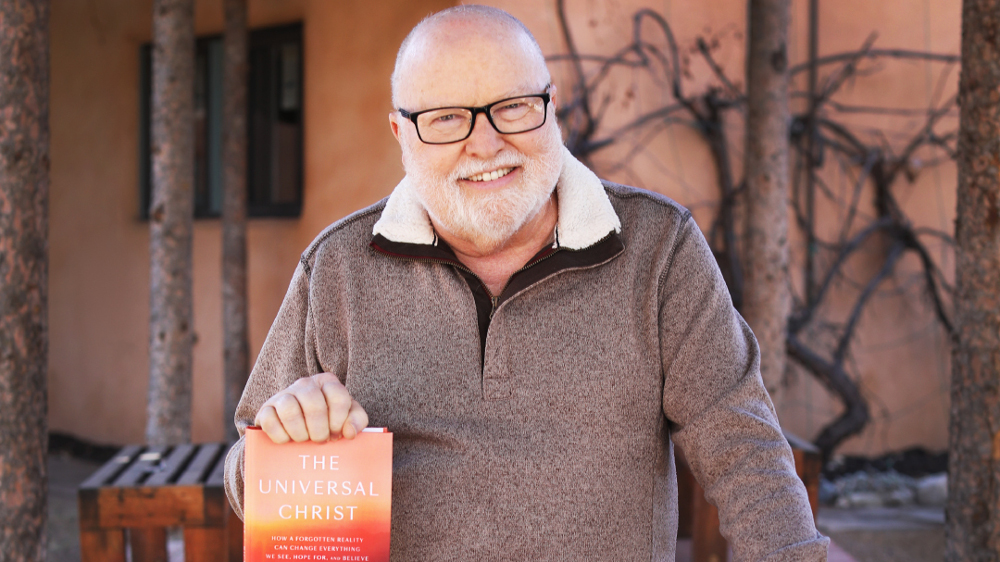 Richard Rohr with his book “The Universal Christ.” (Courtesy photo)

Along a quiet stretch of Five Points Road in the oldest neighborhood in New Mexico's largest city, just down the block from the methadone clinic and a house Catholic Workers share with homeless folks, lives one of the world's most famous modern mystics — an infectiously jovial, flannel-plaid-wearing Franciscan friar, with a childlike joy for telling the world that Jesus Christ loves everyone and is in everything.

It's a simple, if radical, idea. And one that some critics of Richard Rohr, the 76-year-old Franciscan who founded the Center for Action and Contemplation in Albuquerque 32 years ago, have described as "dangerous" and even "heretical."

Rohr, one of the most influential Christian contemplatives of the last century, is unfazed by such critiques of what he believes is the theological foundation for a "reformation of the Christian faith." He unpacks this idea, defending it theologically, historically and scripturally, in his new book, "The Universal Christ: How a Forgotten Reality Can Change Everything We See, Hope For, and Believe."

"This is not heresy, universalism, or a cheap version of Unitarianism," Rohr writes. "This is the Cosmic Christ, who always was, who became incarnate in time, and who is still being revealed."

While the Cosmic or Universal Christ may be a new idea for many contemporary Christians, Rohr insists it is ancient — part of the "perennial tradition," which teaches that all wisdom and knowledge in world religions and philosophies are rooted in the same universal source.

The perennial tradition "trains you to connect the dots and see what themes keep recurring" in Scripture, he said.

Ancient or new, dangerous or revolutionary, "The Universal Christ" has found an enthusiastic audience. Released in early March, the book recently debuted at No. 12 on the New York Times best-seller list for nonfiction.

A prolific author with more than 30 books in print, Rohr says "The Universal Christ" is the culmination of everything else he has written and taught and preached in a lifetime of ministry and contemplative practice. It is his magnum opus, if you will.

He also expects it to be his last book.

While by all appearances Rohr seems energetic and even robust, 15 months ago he suffered a heart attack, which came on the heels of a successful battle with prostate cancer in 2015.

Recently, however, cancer returned and he is undergoing treatment.

"I take four horse pills every day that amount to oral chemotherapy," Rohr told Religion News Service on a chilly morning as he strolled the grounds of the CAC in late March. "That I could have two things that would normally be fatal and still be sitting here? I am nothing but grateful for the miracle of modern medicine."

While he blithely says he never expected to live to the age of 76, Rohr assures a visitor that his death is not imminent.

"I do not have that sense at all, thank God," he said. "I just know if I'm a realist that I'm in the final stage — whatever that means — of my life."

Although he says "The Universal Christ" is his last major work in print, Rohr hopes to write a short tome, a monograph, on St. Paul's understanding of sin. 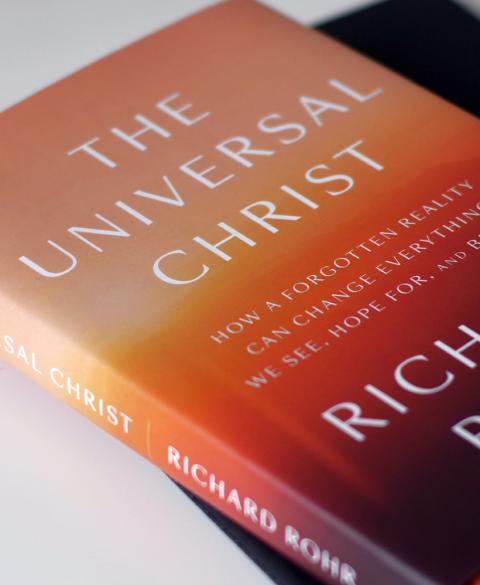 "It was the hardest book I ever wrote. … I knew I had to say this and I've got nothing to lose at my age," he said, stopping to greet several members of his four-dozen-strong staff, the CAC office buzzing with activity in preparation for The Universal Christ conference in the Albuquerque Convention Center.

Sold out with 2,200 people registered to attend, the conference, which began Thursday (March 28), is the center's largest-ever event.

Over the centuries, much of Christianity has lost track of the "Christ" part of Jesus Christ, Rohr argues in "The Universal Christ."

According to the theology of the Trinity — God in three persons: Father, Son and Holy Spirit — Jesus was fully human and fully divine. Not half and half. Fully both. By minimizing or ignoring Jesus' identity as the Christ, Rohr believes, Christianity has missed a message central to the gospel: that through Jesus Christ, God loves and redeems "every one" and "every thing."

"If all of this is true," he writes, "we have a theological basis for a very natural religion that includes everybody. The problem was solved from the beginning. Take your Christian head off, shake it wildly, and put it back on!"

Building on Scripture such as Colossians 3:11 — "There is only Christ. He is everything and he is in everything" — and Colossians 1:19-20 — "Through him all things are reconciled, everything in heaven and everything on earth" — Rohr believes that "everything, without exception, is the outpouring of God."

A humpback whale. The whir of a washing machine. A soldier far from home. The Carina Nebula and the Hubble Space Telescope. A woman marching in the streets for her civil rights. A family of asylum-seekers separated at the border. Coffee. Oreos. A sunset. Laughter.

Or Rohr's beloved black lab, Venus — his constant companion for 15 years who passed away two years ago — to whom he dedicated "The Universal Christ." 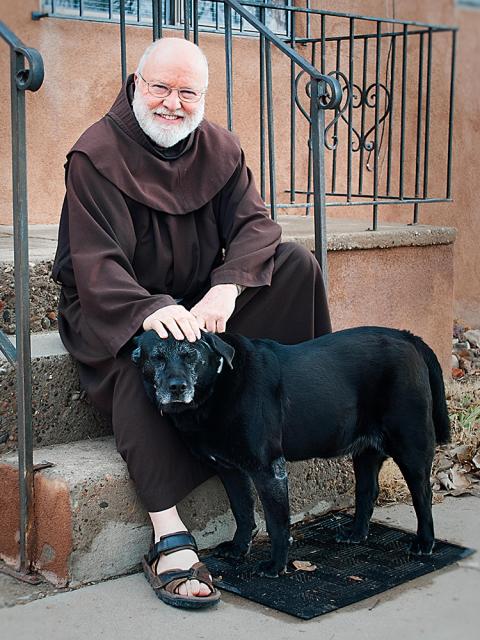 Richard Rohr’s black lab, Venus, was a companion for 15 years. “The Universal Christ” is dedicated to the dog. (Courtesy photo)

"Without any apology, lightweight theology, or fear of heresy, I can appropriately say that Venus was also Christ for me," he wrote.

Back in his office at CAC, while holding a framed photograph of Venus, he explained, "Whatever evokes from you the flow of love is operating as Christ for you."

As he walked from the CAC offices, which are housed in an adobe building more than 100 years old, to the visitor center one-tenth of a mile away, it is obvious that Rohr delights in his surroundings, whether natural or human-made. He points out the white blossoms of a pear tree and the adobe buildings — some of them centuries old — common to Albuquerque's Barelas community, formally established in 1662 and where he has lived since 1986.

He stops near a narrow aqueduct that runs between the CAC properties to explain a bit of the history and function of these "acequias."

The acequias, which are run by the individual communities through which they flow, have gates that control the levels of the water that comes from the Rio Grande to help irrigate farmland. Likely originally dug by Native Americans, the acequias system was expanded during the Spanish colonial period in the 17th and 18th centuries.

In his book "Acequia Culture," historian José Rivera describes how the aqueducts play an important cultural and even spiritual role in New Mexico, where annual blessings of the irrigation ditches often combine Catholic and pagan elements.

The acequias in Barelas remain in use to this day. 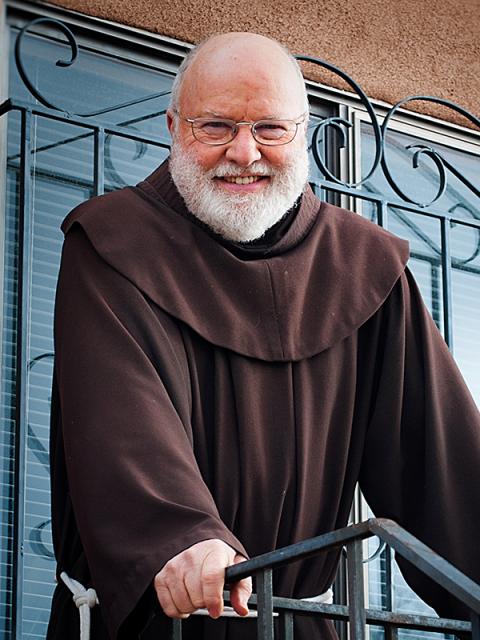 A native of Topeka, Kan., Rohr entered the Franciscans in 1961 when he was just 18, beginning his theological studies in earnest just as the Second Vatican Council convened in Rome.

"It was the wonderful '60s," he recalled, chuckling. "The perfect time to be educated, to be given a critical mind, but then given good philosophy and theology to know how to process it — all the negativity that our country went through then and is back into now 10 times worse."

Rohr became ordained to the Catholic priesthood in 1970 and earned a master's degree in theology from the University of Dayton the same year. In 1971, he founded the New Jerusalem Community (an intentional community that, for a time at least, managed to combine the charismatic and social justice movements) in Cincinnati, where he lived and worked for 15 years before relocating to New Mexico.

He connects the dots through his lifetime of contemplative, mystical practice, and social justice activism — carried along by "the flow of Divine Love" — back to his first "awesome experience" with God on his cousins' farm in western Kansas when he was 13 years old.

"I'm just lying in the velvety grass, looking up at all the stars," Rohr recalled. "I got this personal sense that the universe was a safe place, a good place, and that I was part of it."

Not long after, he decided to go to seminary.

"I've called it my 'beautiful place' ever since," he said, adding that whenever he's back in Kansas, he tries to visit the spot. "I still would like to go back there again."

The initial vision he experienced as a boy lying in a Kansas field still inspires Rohr today.

He believes the predominant theme that runs throughout Scripture and tradition is grace, which Rohr describes as a kind of divine spackling compound that God uses to fill in the gaps between everything in all of creation.

"If something comes toward you with grace and can pass through you and toward others with grace, you can trust it as the voice of God," he said. "Just give up on anything except the God who is grace itself, the filler of the gaps."