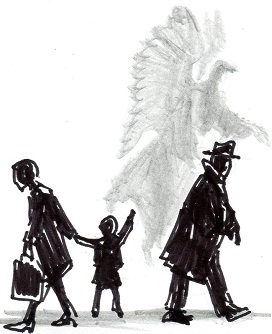 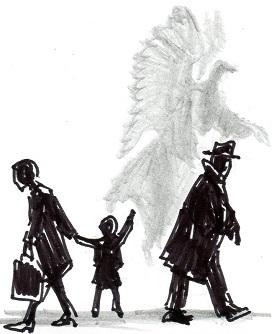 “You will see heaven opened and the angels of God ascending and descending on the Son of Man” (John 1:51).

When we recite the Nicene Creed, we say that we believe in “things seen and unseen.” We affirm that God’s Creation includes both material and immaterial, or spiritual, realities. Because we can only perceive through our senses, spiritual realities must be manifested to us through some intermediary. In the Bible, angels are spiritual beings who  sometimes mediate God’s invisible presence in visible form.

If as children we found this explanation confusing, our imaginations could still grasp the idea that there is more to this world than what we see or hear, and the idea that spiritual companions watched over us was reassuring. Angels were like bridges between this world and heaven, messengers going back and forth between us and the immense mystery of God, a Being so totally other it was hard to relate to except with human imagery.

Today’s liturgy celebrates three such angelic figures mentioned in the Bible, God’s messengers Michael, Gabriel and Raphael, who were sent to make God’s will manifest on earth.  In a way, each one foreshadowed the full manifestation of heaven coming to earth, the union of divine and human, revealed in the Incarnation of Jesus.  Today’s Gospel focuses on this mystery in the story of Nathaniel’s encounter with Jesus.

Nathaniel is startled when Jesus says that he has seen him under a fig tree. The passage is rich with biblical references to Jacob’s dream of angels and implies that Nathaniel had been meditating under a fig tree about this story from Genesis 28. He realizes that Jesus has seen him in mystical prayer, and he says in astonishment, “Rabbi, you are the Son of God.” Jesus confirms this insight by telling Nathaniel that, like Jacob, he will “see heaven open and the angels of God ascending and descending on the Son of Man.”  In fact, the person before him is heaven come to earth, Jesus, who is both divine and human, the Son of Man and the Son of God.

Only the gift of faith can prepare us to grasp this mystery, that God has come to earth in the human person of Jesus. Like stories of angels, science does not deal in spiritual realities, which are beyond observation or proof. But even scientists speak of frontiers, both outer and inner, that mark the limits of their concepts and methods.  We celebrate angels to remind us that, in the words of St. Paul: “Eye had not seen, ear has not heard, and no mind has imagined what God has prepared for those who love him” (1 Cor 2:9).