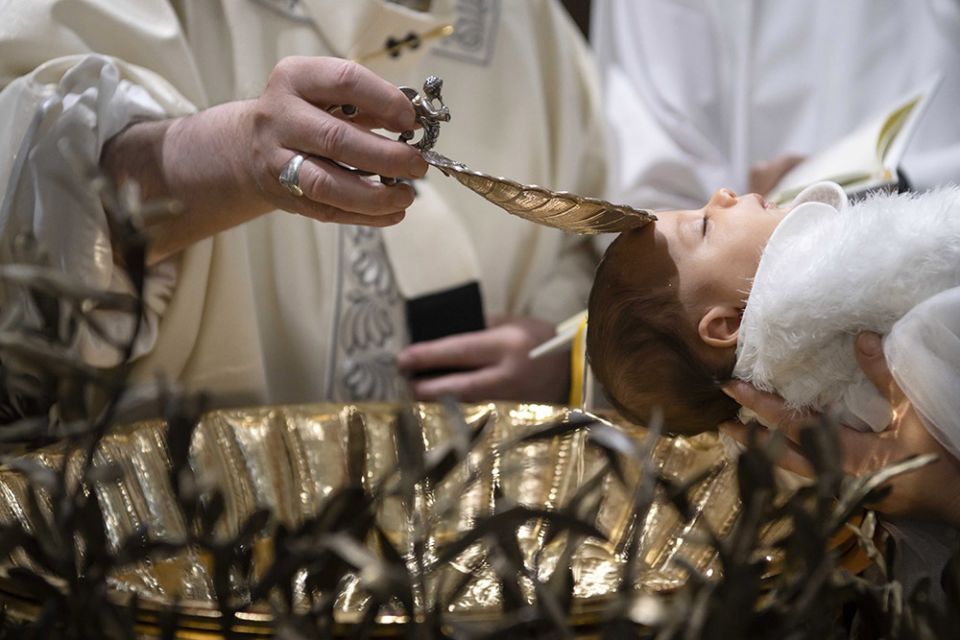 Pope Francis baptizes one of 32 babies as he celebrates Mass on the feast of the Baptism of the Lord in the Sistine Chapel Jan. 12, 2020, at the Vatican. (CNS/Vatican Media)

"Behold!" That's the traditional opening of today's reading from Isaiah. "Behold!" means that God wants us to look at something so carefully that we realize we may not quite capture all that it means. (See Isaiah 7:14: "Behold, a virgin shall conceive;" or John 1:29, "Behold the Lamb of God," and many more.) So here God says, "Behold my servant … upon whom I have put my Spirit."

Jesus would have known this passage well. It was one of four "Songs of the Servant of God" that helped the early church understand Jesus in the light of their tradition. For Jesus, it was probably something like a divine love poem, a scripture he could recite and in which he could always find new meaning. So, today's liturgy begins with the invitation, "Behold!"

Just as Jesus needed to apply the words of Isaiah to his own time, we look at these Scriptures to interpret what they have meant across the ages, from the days of Isaiah about 540 years before Christ, through the first century and into our own 21st century. Although scholars remain uncertain about to whom the servant songs refer, one thing they clearly express is God's promise to work for the good of the people through a human being. The extraordinary thing about this person is not just his gentleness, his vocation to be a light or even that God formed him and will take him by the hand. The defining characteristic of the servant is that as a chosen one of God, he is filled with God's own spirit. Everything he does will flow from the strength of God's spirit in him. Jesus of Nazareth, the pious young Jew, would have been intensely aware of that.

In Mark's Gospel, Jesus seemingly appears out of nowhere. Matthew and Luke recount his birth and John proclaims that the Word existed before creation and was God. Mark is much less formal. After his title sentence, Mark introduces John the Baptist as a very popular prophet, so humble that he says he's unworthy even to serve the one God was sending. Then, almost casually Mark remarks, "It happened in those days that Jesus came from Nazareth." In Mark's mind, Jesus needs no introduction beyond what happens in the verses that follow.

John had been active among the people, preaching that God was about to do such great things that they had better prepare themselves for what was to come. As Mark presents the story, Jesus showed up at John's riverside pulpit and was baptized. We have no idea why Jesus decided to ask John for baptism. Mark seemingly knows nothing about Luke's story about how they were related through their mothers.

When we compare the accounts of Jesus' baptism in the Gospels, it's obvious that it embarrassed the early community to admit that Jesus submitted to John. Therefore, the evangelists emphasize Jesus' own experience. Mark explains that as Jesus rose from the water, he saw the heavens torn open in the same way that the curtain of the temple would be torn from top to bottom at the moment of Jesus' death. In both cases the rending was a revelation, one to Jesus, the latter to all who worshipped at the temple. The message: Heaven is open to earth. Then, in what could be seen as a pre-revelation of the Trinity, Jesus saw the Spirit descend upon him like a dove and heard the voice of God call him the beloved Son.

This was a "Behold!" moment for Jesus himself. Whatever he had done before this, coming up from the water was his epiphany, a moment of discerning how God's life would fill him and call him forth. Like the resurrection, the epiphany after his baptism was Jesus' personal religious experience, a uniquely God-touched moment that would be ratified later in the transfiguration and resurrection appearances. Whatever motivated Jesus to go to John for baptism, his experience as he came up from the water affirmed the relationship he had cultivated with God and the vocation he was about to begin living in public.

If this was Jesus' personal experience, what does it mean for us? Our second reading from 1 John tells us: "Everyone who believes that Jesus is the Christ is begotten by God." We might paraphrase the Rabbi Hillel and say that this so sums up the New Testament that everything else is commentary.

Christians are not called simply to worship and believe in Jesus Christ, but to share in his intimate relationship with God. We too are invited to seek to do God's will and to hear the response, "You are my beloved, in whom I am well pleased." Behold! This is what we celebrate in remembering Jesus' baptism and our own.