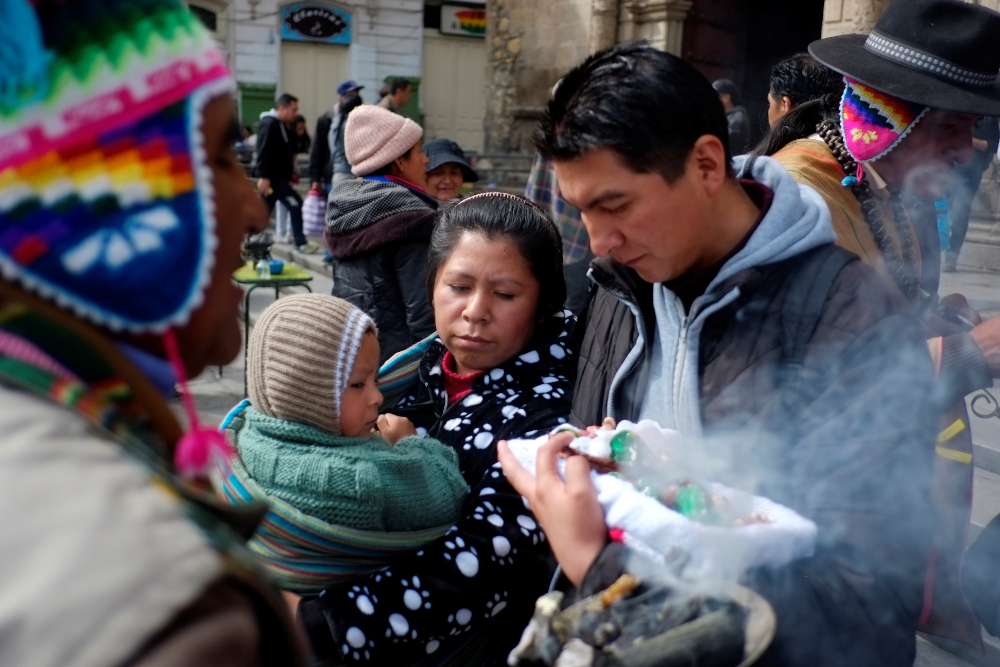 A family carries figurines of the Christ Child outside St. Francis Church during celebrations for the feast of the Epiphany Jan. 6, 2019, in La Paz, Bolivia. (CNS/Reuters/David Mercado)

Humanity has long been fascinated with the heavens — especially the night sky. Abraham saw the promise of untold progeny in the stars. According to some folklorists, "Follow the Drinking Gourd" was an Underground Railroad anthem, helping escaping slaves orient themselves by the Big Dipper and North Star. Then of course we have today's Gospel about the holy people lured by a star to an encounter with the child Jesus.

It's not unusual to hear people try to prove or disprove the existence of that star and the Magi's visit. That's one way of trying to deal with the truth of the Scriptures. But the very fact that the seekers were following a star hints that the mystery of this story is far richer than any factual data we might be able to produce.

Matthew's tale begins with the Magi, a name which designates the sky-gazing pilgrims as religious people who read the signs of the times via the stars. Although Matthew mentions their three gifts, he says nothing about how many participated in what could have been a whole caravan.

Following the theme of the heavens, the Magi came "from the rising of the sun," i.e., the east. Their interpretation of the stars told them that a "king of the Jews" had been born. Unwisely, the pilgrims decided to consult the current ruler, the notorious King Herod. In a tragically ironic twist, Herod turned to local theologians to ask where a Messiah would be born. Culpably incurious about the signs of their times and what God was up to among them, the religious leaders simply reported the results of their Scripture study: Bethlehem of Judah was the designated birthplace for the ruler who would shepherd Israel.

In what sounds like a comic twist, the Magi — whose quest had already taken them more than 1,000 kilometers — heard Herod ask them to "search diligently for the child." Of course, he did so only for malevolent purposes. But because they were God-seekers, the Magi were too attentive to signs from heaven to end up being accomplices to Herod's evil.

There is no doubt that this is a great story and that it adds a wonderful diversity of costumes and exotic animals to our Nativity scenes. But what else are we to take from it?

Of all the evangelists, only Matthew, the one who wrote most directly for a Jewish audience, tells us about the Magi. Whereas Luke, who wrote for a broader public, highlighted the Jewish characters of the shepherds and the elders Anna and Simeon in Jesus' birth story, Matthew spotlighted foreigners, people with no awareness of the faith and promises of Abraham. Thus, Matthew reminds his readers that they are a "chosen people" so that they would become, as Isaiah said, a light to the nations. Israel's centrality in the divine plan was all about their vocation to make God known to the whole world.

The title of today's feast is the Epiphany (Revelation) of the Lord. The truly tragic irony in Matthew's story was that pilgrim pagans journeyed far from home because they believed God was doing something new while the leaders of the chosen people read their scriptures, but no longer expected God to reveal anything new. The religious leaders of Jesus' day had worked out an uneasy but relatively peaceful accommodation with the Roman Empire. Rome allowed the clergy to function as long as they did not rock the boat; therefore, the Jewish people enjoyed some degree of freedom to practice their religion. In today's terms, they were living in something between accommodation and complicity.

The Magi, on the other hand, intuited something that awakened their dreams enough to shake them out of a settled existence. They may not have had the promises of Abraham or a sense of the God of Israel, but they did believe that life could be more than what they already knew where they were. Without knowing details, they believed in a God of revelation.

As we begin this new year, the Magi might be inviting us too to read the stars, to look for epiphanies of God among us and to allow mystery to shake us out of our status quo and beyond the borders of our comfortable relationships and thought patterns. In Fratelli Tutti (Paragraphs 126, 127, 128), Pope Francis invites us to learn from COVID-19's vivid demonstration of our intimate connectedness across the Earth. Francis calls on us to establish effective networks of international relations of solidarity — something that could be a specialty of the worldwide Catholic Church.

Like the Magi, we may not know exactly what we are looking for, but if we set our sights high enough, God will not hesitate to lead us into new epiphanies where we will meet God among us in unexpected and wildly rich ways.