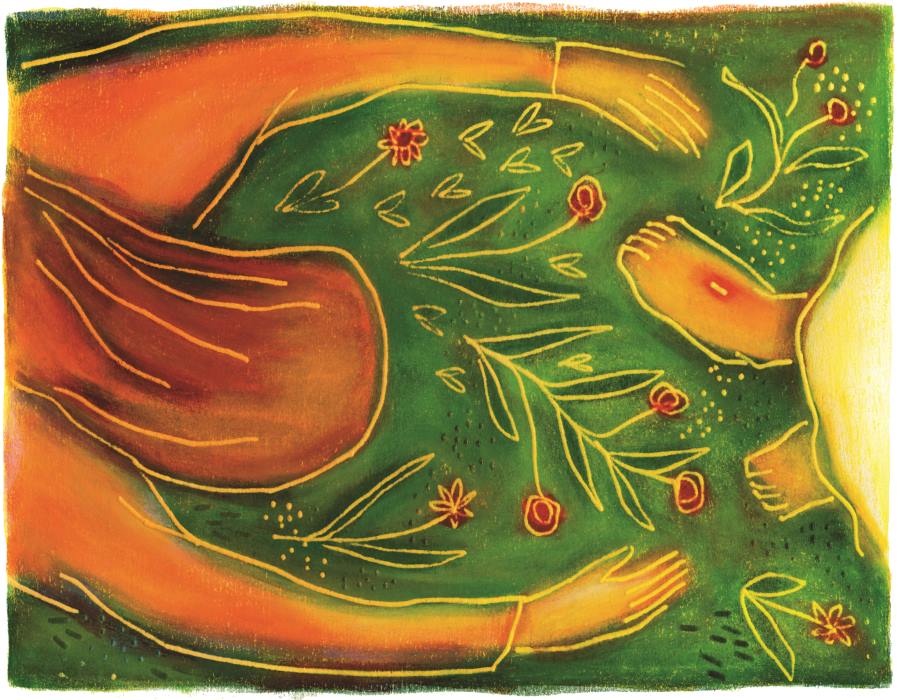 I have always loved to walk hedgerows. They are unruly places that refuse to be mowed or that people forget to mow. They are untamed places, often as beautifully wild as they are magnificently unused. They have extraordinary biological density. In this space things are left alone long enough to mingle. Hedgerows appreciate hybridization.

Pope Francis speaks of his love of ecological density and his appreciation of mixtures in his encyclical, "Laudato Si', on Care for our Common Home," he speaks with awe at the number of different species that exist suggesting that any diminishment of the number of species is an assault on creation. Globalization and migration have mixed up population so that intermarriage is increasing, thus creating more hedgerows of a human nature.

Hedgerows are like an ecotone; where forest meets field, where sea meets land, where saltwater meets freshwater. Natural ecologists tell us that ecotones — with their intermingling borders — are charged with "evolutionary potential" and are considered some of the most rich and productive spaces on the planet. When we combine this knowledge with the Greek etymology of ecotone, oikos (dwelling) and tonus (tension), we evoke an image of dwelling at the edge of tension between different people, beings, landscapes, maybe even generations and time. God may actually want us to "mix it up," even if it makes us tense sometimes.

What intrigues those of us who do ministry is here. We are often the "relationship managers" (as one automated voice described herself while we were on hold together). In our diverse pews, the rich sit next to the poor, the immigrant sits next to citizen and the young sit next to the old. Within those already interesting diversities, white genetic material mixes with black genetic material and brown genetic material — as well as pre-mixtures of genetic material. What are we to do when ministering within the context of high diversity? By the way and not necessarily parenthetically, those of us who minister to homogeneous congregations, biologically, may also find the challenge of ministering to politically "purple" congregations in a time when red and blue people, in the United States, are enjoying a pretty knockdown, drag out fight. Diversity is the name of the game in ministry and indeed, we are relationship managers.

What might Pope Francis, the one who knows how to lead, encourage us to do? He would encourage us to love hybridity. Yes. Love it. The pope's great breakthrough was to reframe the environmental opportunities we face in the context of praise, joy and love, and to move them out of lament and challenge.

Why do I love a hedgerow? Because it is a false border, an inauthentic divide. One farmer's field may end there and another begin on the other side, but so what? What does that matter to the action underground of the thorn and the thistle, the wild sassafras or the oak tree? What do the wild mushrooms care about the farmer's borders or their false idea that they own the land? Farmers borrow land from creation, just the way pastors borrow congregations from the divine. We have them — in cosmic terms — for a short time and then we pass them on to the next caretaker.

The pope would argue with the hedgerow that slow and steady is a form of love. Evolution is adapting, as we walk by. Love is a lot easier in the long view than the short one. In the short view, we surely get annoyed with each other and rarely know exactly why. In the long view, we ask ourselves the genuinely important questions about the point and direction of creation and how we can play our small but vital part.

The social psychologist, Erik Erikson wrote biographies of Luther and Gandhi arguing that each leader is remembered because of their relationship with their times. They embodied the conflicts of their moments. They incarnated themselves in the disturbances of their day. They represented the rivalries of the past with an emerging future. They lived at the hedgerow.

I have always loved New York City's Riverside Church's emeritus pastor, Rev. Jim Forbes' enunciation of human self-centeredness — instead of God centeredness — in terms of black and white churches. "White churches always want to know what they can do for God. Black churches want to talk about what God has done for them." One of the things we can all do for God is to participate lovingly in creation's plan to mix us up, joyfully. That same diversity will bless us along our long way.

Editor's note: This reflection was originally published in the May 2017 issue of Celebration. Sign up to receive daily Easter reflections.