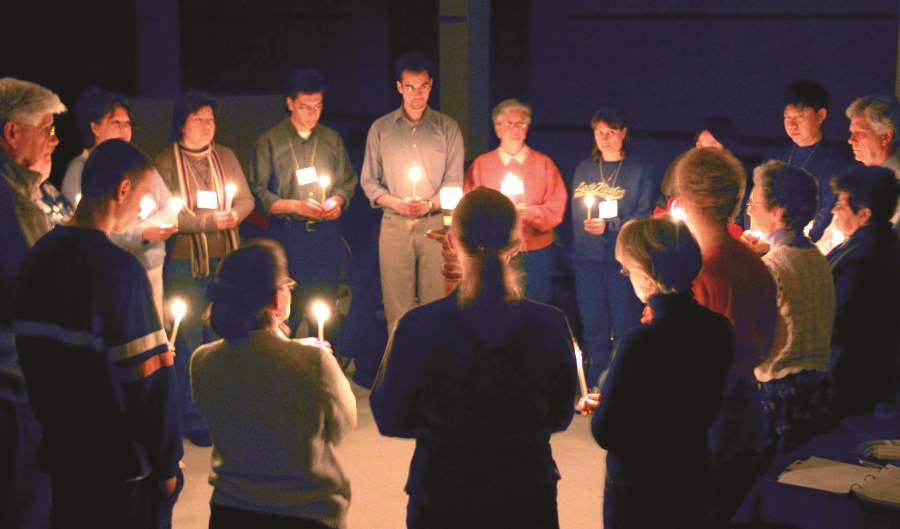 In 2005 and 2004 the homilies given here for late Lent were something of a summons to the assembly to fulfill their right, duty and need to take part in the liturgies of the Triduum, always hoping that those liturgies would be done in their fullness, with the full, conscious and very active participation of the assembly. This year what is offered below is a homily for the Vigil itself. In a sense, this night is where we go to discover what mystagogy is all about. It is at the Vigil that the preacher, little by little over the years, must unfold the mysteries of the paschal season, of Lent and of Easter and so of conversion and the full process of initiation and reconciliation, which is nothing less than Gospel service in the world. This Vigil preaching is done in a room now filled with the echoes of many scriptures and many psalms, a room that has just welcomed the Alleluia and a room where the font is filled and waiting, the table empty and waiting. A homily like this is going to be partial, is going to presume that it builds on previous years, overlaps, prepares for future years. It also presumes that this assembly has been here for a long time, first lighting and praising the great candle in whose light the preacher now stands, then through the telling of the stories (that is, all the stories and maybe more). But all of that should not be pressure to hurry. Time will matter only if what should be liturgy has become something for audiences to watch and listen to. Don't let that happen.

Yes, we have been here a long time already tonight. And tonight we are simply ending the time of vigiling, praying and fasting that we began on Thursday night when we washed each other's feet here in this place, the vigiling and praying and fasting that continued through Good Friday when we came forward one by one to kiss or embrace or bow or kneel before the image of the cross.

Through Holy Saturday this vigiling continued, when we gathered the elect and asked them to pray with us and to pray especially the Lord's Prayer and to recite the Creed.

This "long time" is even longer, for we entered these three days only after we had observed the disciplines of Lent's Forty Days. Like athletes preparing for the contest, like skilled musicians making ready for a concert, we took on Lent this year. With prayer and fasting of all kinds and the sharing of whatever gifts we have, we determined to become faithful to that baptism which made us Christians. Of course and as always, we failed to do what we might have done, we failed to do even what we wanted to do. But by God's grace we all come to this night boldly, wrapped in the love and forgiveness of God. We come in the darkness, holy and powerful darkness, not to await the sunrise of Sunday but to await the risen Lord in those who are to be baptized in our midst. We come to know the risen Lord in one another and in the sacred banquet where we shall dine on the body and the blood of the one whose Gospel is little by little, Lent by Lent, Vigil by Vigil, shaping this community, this church.

The stories we have heard in this blessed night abound in the words and the images that give foundation to the way we would see and hear and be and do. We began as at every year's Vigil with the first words of the first page of our scripture: "In the beginning, when God created the heavens and the earth, the earth was a formless wasteland, and darkness covered the abyss." Over and over comes the lovely refrain that wraps this story round: God saw how good it was.

To take this as a story about history or science is to miss its power and its purpose. God saw how good it was. Every tribe, every religion, has a story for how the world came to be, and each of these, like our story, is trying to say how to be in this world, how to live in this world. So with our story: God saw how good it was. Only when we know and believe this — that God's creation is good, all of it — will we have ears to hear the scriptures that follow and ears to hear the daily news.

In some churches the story of creation is followed tonight by the story of the great flood, a story of what became of those two who were made in the image of God. God sweeps away all that God saw as good. But even the flood story ends with a new creation: a new covenant between God and humankind. And so through all these stories are the ways God and creation struggle with and against one another. Violent images abound: Abraham's raised knife is unbearable to us yet we know it well. We are called to rejoice in slaves escaping through the dried-up sea to freedom, but are we not also to mourn the dead conscripts drowned in the waters?

But we heard also an amazing array of images beyond any violence. We heard that tonight is, in Isaiah's ancient poem, a wedding night. "The one who has become your husband is your maker." And this wedding is made, as is every wedding, with promises: "Though the mountains leave their place, my love shall never leave you." And the promises are for those who hunger, those who thirst, those who know oppression: "You who have no money, come, receive grain and eat; come, without paying and without cost, drink wine and milk."

This night's talk is about a very different way of living in God's creation than the one most of us know day by day. Tonight's poetry comes as a very strange challenge to those of us content with things as they are, those who are content to leave the government to the officials, the church to the bishops, the wealth to the wealthy.

For the scriptures of this night are not pretty sentiments but they are the means by which we attempt, year after year on this one night of all nights, to face up to what we are: the assembly of those who have, as Paul told the church at Rome, been baptized into the death of Christ Jesus. That's what matters. We are no longer slaves to sin. We are no longer bound to violence. We are no longer prisoners to some nationalism, some economy, some security, some wild claims that safety lies in more and better weapons, some flimsy false promise of "the good life." All of this, all these idols, we put to death once for all in the waters of baptism. Yet year by year by year we need Lent to come and this Vigil to come so we can recover and strengthen the death we died in baptism, strengthen the shouts with which we renounce evil and sin in all their faces and forms. Year by year we need the fasting and prayer and good works to make it clear to ourselves and perhaps to others that we have died with Christ and we are living now not as slaves to sin, but as servants of God who loves this world so dearly.

Think about this: Here we are tonight, a Saturday night in the spring. Here we are spending hours together to listen like children to the old, old books and their wondrous tales. Notice that the last of the stories is not some description of a dead man bursting out of a tomb, not at all — that may appeal to some artists — but it's not the way the Gospel tells it.

Instead we have the tale of those three called in tradition the "myrrh- bearing women." These are the three who came when the Sabbath of God's rest was over, came more boldly to the tomb than any man would do. There they found not the hastily buried body of Jesus but someone who said to them what is being said to the assembly tonight: "You seek Jesus of Nazareth, the crucified." Yes, the crucified. The washer of feet. The teller of parables where the status quo is turned upside down. The one who healed the sick, took meals with sinners, challenged the powers-that-be not with troops or terror but with truth. The crucified. Of course.

When the stories have all been told, we rouse ourselves to call on a long line of our brothers and sisters who have died but who are bound to us in the communion of saints. We name a lot of them and as we do this we walk with the elect to the font. Let its waters evoke for us the waters at creation, the waters that held the ark of Noah, the waters of the sea that parted for Moses, the waters given freely to those who thirst, the waters Ezekiel saw, the waters that flowed with blood from the side of the crucified one. Only a few will enter those waters tonight, but we know that all we baptized are there.

These waters are death-dealing, a tomb. These waters are life-giving, a womb's waters. Beside them the elect will be asked to promise what each one of us knows is going to take a lifetime: the day-by-day renunciation of evil and the living of a life that believes in God our creator, God our savior, God our very breath and life. And when they have come through the waters, there is the fragrant oil, the very fragrance of Christ in our midst, to be poured on them and to seal their baptism.

All of us are to take the water and make the sign of the crucified on our bodies, to touch the perfumed oil on the hair and faces of the newly baptized, embracing them.

And all of us, this tired but beautiful assembly, are then to come around the table where in loud thanks for the tender mercies of God, we who are so hungry and so thirsty for justice are given the body and blood of the one who is the mercy and the justice of God, Jesus our Lord, to be our food and our drink.

So now, my sisters and my brothers, stand, and with the elect, come to the waters, invoking all the saints to pray with us, to pray for us.

Editor's note: This reflection was originally published in the April 2006 issue of Celebration. Sign up to receive daily Lenten reflections. 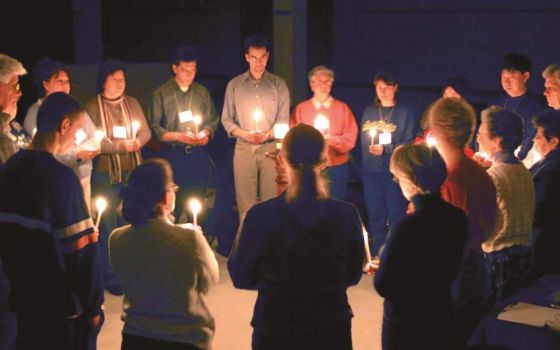 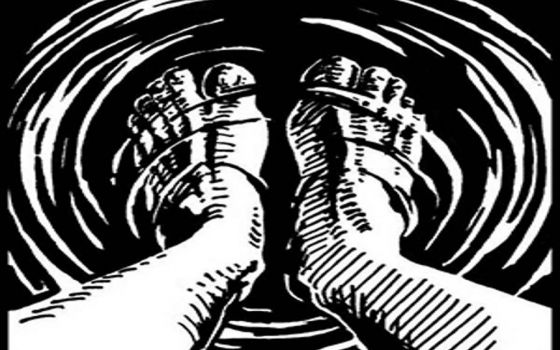 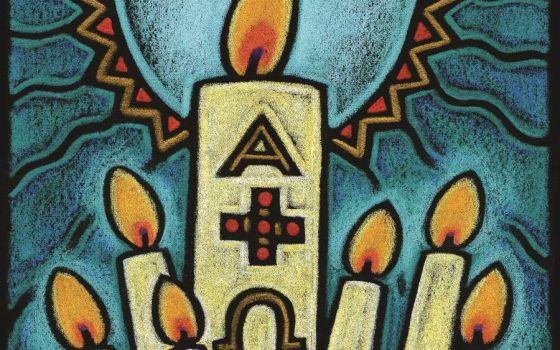 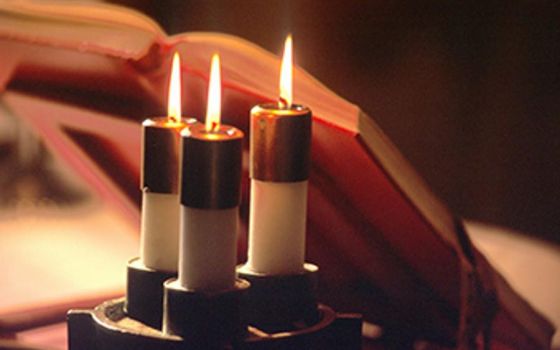